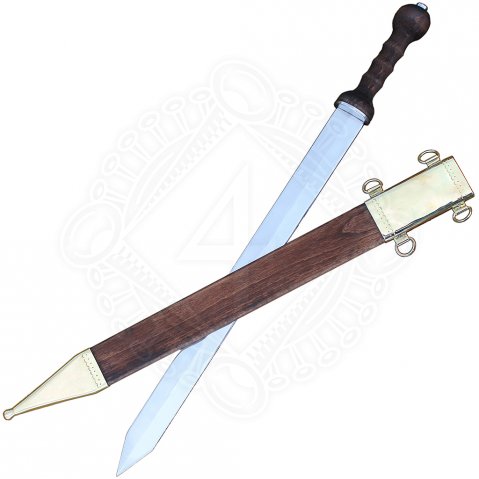 This model represents a prolonged version of the Roman Gladius sword. The Gladius Livianus can be delivered with brass-fitted wooden scabbard for corresponding extra charge. The wooden scabbard is not covered by the basic price.

Specifications of the Gladius Livianus:

Made in the Czech Republic.

The Gladius was the ideal weapon in close combat infantry formations, such as the Romans used it. In the dense fray of the infantry, both due to their close unity and mass printing had the onrushing limbs and was protected in front by the large shields (Scuta) recalled that the short length of the sword is positive and gave the Legionnaires, despite the narrow and crowded an advantage. He was also the densest fray still use his weapon (stabbing in particular), without dropping his guard, while owners of long swords that under these conditions could hardly be used.

Gladii were two-edged for cutting and had a tapered point for stabbing during thrusting. A solid grip was provided by a knobbed hilt added on, possibly with ridges for the fingers. Blade strength was achieved by welding together strips, in which case the sword had a channel down the center, or by fashioning a single piece of high-carbon steel, rhomboidal in cross-section. The owner's name was often engraved or punched on the blade.

Stabbing was a very efficient technique, as stabbing wounds, especially in the abdominal area, were almost always deadly (see the quotation from Vegetius under pugio). However, the gladius in some circumstances was used for cutting or slashing, as is indicated by Livy's account of the Macedonian Wars, wherein the Macedonian soldiers were horrified to see dismembered bodies. Though the primary infantry attack was thrusting at stomach height, they were trained to take any advantage, such as slashing at kneecaps beneath the shield wall.