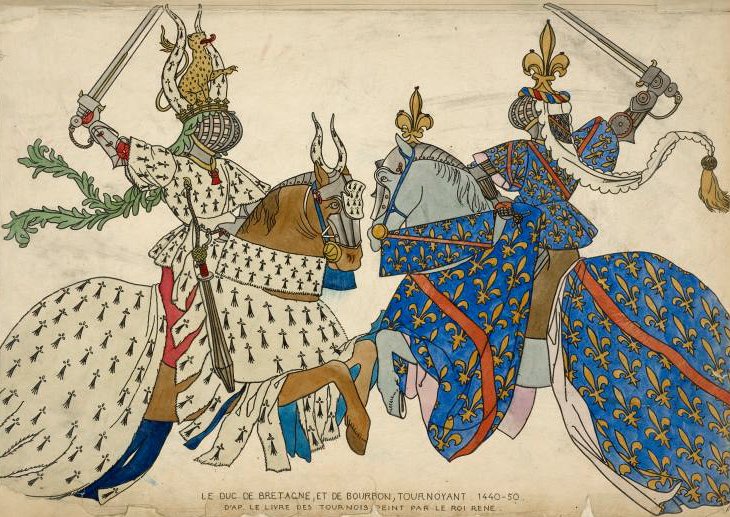 The Middle Ages could be really harsh sometimes. People experienced plenty of cruel war conflicts, crop failures resulting in sinister famines or epidemics of deadly diseases such as the infamous “Black Death”. However, times like these did not stop our ancestors from seeking fun. In 11th century French noblemen came up with a tournament – basically a fake combat between the knights. This game soon gained massive popularity among European aristocrats in spite of its danger and critical attitude of the Church.

The tournaments were held mainly for the knights. The knights were elite cavalrymen who where knighted. The promotion ceremony was called accolade. Everyone who was knighted became a nobleman. It was an honorary title typically awarded to somebody who proved extraordinary bravery or efficiency in the battle or to his descendant who was then hardly trained from early age.

The training of young cavalryman who desired to be a knight was really expensive so in the early Middle Ages the knights were recruited only from feudal lords. The first change came during an era of Frankish Empire when the best horsemen were given honorary titles and lands after the campaign. The knighthood eventually became an established social rank across the continent in the 12th century when the Church decided to support the idea of glorifying war heroes once they fought against non-christian enemy especially during the Crusades (while the wars between Christians still remained bad).The Church had became supervising organization over the knights and was founding own military orders.

The knighthood was not only about to be elite soldier. It also meant chivalry, loyalty and morality. The knight should represent true hero and be inspirational to other people. This ideal was described in old legends and it is so strong that it was revived many times in novels written even centuries later. Here are some examples of medieval literature: The Song of Roland or stories about King Arthur by Robert de Boron, Geoffrey of Monmouth, Chrétien de Troyes or Wolfram von Eschenbach.

Although the knights were practically institutionalized by the Church and knighted by monarchs, the tournaments were not organized by heads of states or church patriarchs. They were public attractions hosted by the noblemen and announced usually a fortnight ahead. First tournaments took place at remote areas but later their popularity moved them closer to towns or castles. The main part of the programme was the fake battle between two “armies” on a large field, all in sight of spectators gathered in their stands nearby. Each group of combatants had their leader and own starting positions on the different sides of the field. Both units consisting of knights armoured with blunt weapons were ready to smash their opponents from the saddles of their horses.

The knights considered the event as part of their training and also the opportunity to show their skills and moral qualities to the eye of the public. The audience were coming to enjoy the melee as well as to place their bets. Some contesting knights tempted by possible profits were trying their luck too.

Tournaments could look a bit different from one region to another. For sake of having some order in the games the rulebooks had been written such as Traite de la Forme de Devis d’un Tournoi (also known as “Le Livre des tournois” – “the tournament book”) by French duke René d’Anjou. For example, the rules said that the tournament is divided into the rounds. First round involved horses and special lances, then a new game started where the combatants had to make it without their animal comrades and were armoured with adjusted swords, maces or flails. Another rule was that not everyone could enter the fake battlefield. The young knight who was keen for participating needed to have a recommendation from his more experienced colleague first. No wonder the tournament book was written in France – this country was a cradle of tournaments and knighthood etiquette.

Apart from the mentioned main battle, some other games were played during the events. Jousting was probably the most iconic one. Two knights facing each other at tiltyard were holding frangible wooden pole in one hand and a shield strapped onto the other hand when trying to knock each one’s rival down from his horse. Some points could be gained for breaking the weapon when it hit the opponent’s shield. The knight could also try to capture the other one’s horse and hold it to ransom. The tournaments offered many other attractions like knights-parade or presentation of war cry. At the end of the event the prizes and medals were awarded and the host provided final banquet for the contestants.

The tournaments were considered as celebration and were very entertaining for everybody involved although they were not exactly the safest activity. Despite the safety regulations, strict rules and using game-adjusted weapons there were cases when knights were accidentally killed during the game. The Christian burials of these unlucky combatants became forbidden from 1130 by the pope Innocent II. Not because of the risky aspects of the events, but because the Church found the tournaments to be celebration of violence and greed. In some countries they even became illegal for some time.

The Weapons and armour

The weapons used by knights were given by the rules. Typical tournament lance was made of soft wood and its length was up to 370 cm (about 12 ft). The wooden shaft was featured with a coronel on its tip – a metal cap with three or four blunt spikes in a shape of a crown. The knight’s right hand which he was holding the lance in was protected by a flared metal vamplate.

The left hand carried a shield (or a secondary weapon like mace, depends on the type of the game) featured with a personal coat of arms. The shield (called ecranche) was strapped onto left shoulder while the hand was holding the reins of a horse. The same hand was protected by manifer, a special kind of gauntlet. The word comes from French main de fer – iron hand/iron fist.

The knights were wearing helmets with decorative crest on the top. It usually resembled some elements from knight’s heraldic symbols or it could be feathers in matching colours etc. Again, it helped to distinguish him from the others. Body armour was mail in the early times but later it was replaced with plates as technologies advanced and covered with surcoats. Personal coat of arms was also displayed there – here is where the name “coat of arms” actually came from. Armoured boots called sabatons were equipped with spurs.

A saddle had higher edges than usual to provide a better stability. Especially the jousters were exposed to enormous physical forces. The horse was also armoured and caparisoned in a way to match the knight’s appearance, his coat of arms and his banner.