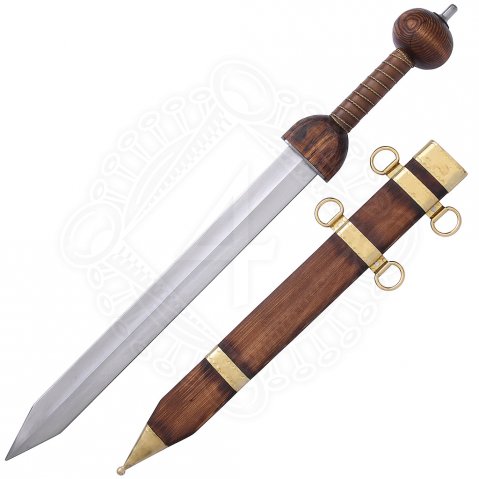 Specs may slightly vary from sword to sword. Made in the Czech Republic.

It was once thought that they were similar to the later Mainz types, but the evidence now suggests that this was not the case.[1] Rather, these early blades followed a slightly different pattern, being longer and narrower, and were probably those that Polybius[2] considered good for both cut and thrust. Later extant Gladiiare now known as the Mainz, Fulham, and Pompei types. In the late Romanperiod, Publius Flavius Vegetius Renatus[3] refers to swords called semispathae (or semispathia) and spathae, for both of which he appears to consider gladius an appropriate term.

A fully-equipped Roman soldier would have been armed with a shield (scutum), several javelins (pila), a sword (gladius), probably a dagger (pugio), and perhaps a number of darts (plumbatae). Conventionally, the javelins would be thrown before engaging the enemy, at which point the gladius would be drawn. The soldier generally led with his shield and thrust with his sword. Contrary to popular belief, all types of gladius appear to have also been suitable for cutting and chopping motions as well as for thrusting. Source: Wikipedia