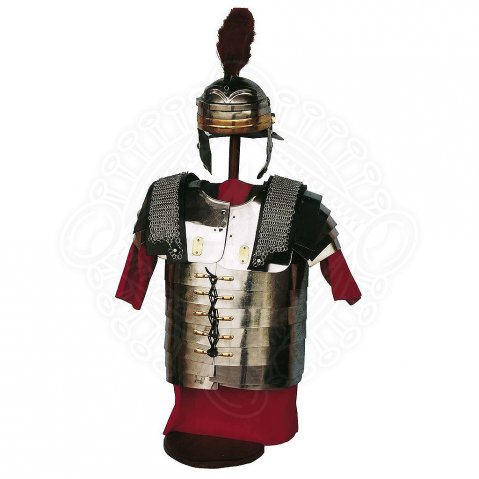 The delivery of the Roman armor Lorica Segmentata consists of the following parts:

The Lorica Segmentata was a type of segmented armour exclusively used in the Roman Empire, but the Latin name was first used in the 16th century (the ancient form is unknown, although it is possible that the Romans referred to the armour as "lorica laminata"). The armour itself consisted of broad ferrous (originally iron, but steel in modern recreations) strips ('girth hoops') fastened to internal leather straps. The strips were arranged horizontally on the body, overlapping downwards, and they surrounded the torso in two halves, being fastened at the front and back. The upper body and shoulders were protected by additional strips ('shoulder guards') and breast- and backplates. The form of the armour allowed it to be stored very compactly, since it was possible to separate it into four sections. The fitments that closed the various plate sections together (buckles, lobate hinges, hinged straps, tie-hooks, tie-rings, etc.) were, however, made of brass.

During the time of its use, it was modified several times, the currently recognised types being the Kalkriese, Corbridge and Newstead types, named after their places of discovery. There was, however, a considerable overlap between these types in use and the Corbridge and Newstead types are often found at the same site (e.g. at Caerleon in Wales, Carnuntum in Austria, Carlisle in England and León in Spain). It is possible that there was a fourth type, a hybrid of the banded armour together with scale shoulder defences. However, this is only known from one badly damaged statue originating at Alba Iulia in Romania. The currently accepted range for the use of the armour is from about 9 B.C. (Dangstetten) to the late 3rd century A.D. (León). Its use was geographically widespread but chain mail may have been more common at all times.

Included in these categories: Antiquity Armour