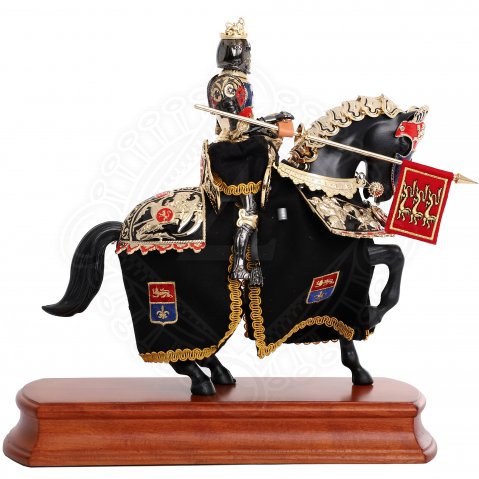 Base made of varnished samba wood. Brass pieces of the armour knight are made of pewter with black nicked electrolytic baths and decorated with enamel of different colors. Textile cloths with embroideries and golden hem. Flag of land is made of embroideries on felt.

History: This model of knight is related to the historical English character Edward of Woodstock, known to history as the Black Prince (1330 – 1376)

Edward, Prince of Wales, known as the Black Prince for the color of his battle armor and weaponry, had a glorious military career capped by great victories at Crecy and Poitiers in the Hundred Years’ War.

Edward earned distinction as one of the most successful English commanders during the Hundred Years' War, being regarded by his English contemporaries as a model of chivalry and one of the greatest knights of his age.

He is immortalized as a founding member of the Knights of the Garter, an Order based on the     principles of the Round Table and still surviving today under its motto “HONI SOIT QUI MAL Y PENSE” (damned is he who thinks evil).The Sword of the Black Prince, reproduced from the milled effigy on his tomb in Canterbury Cathedral, is a wonderful reminder of this medieval hero.

Included in these categories: Mounted knights