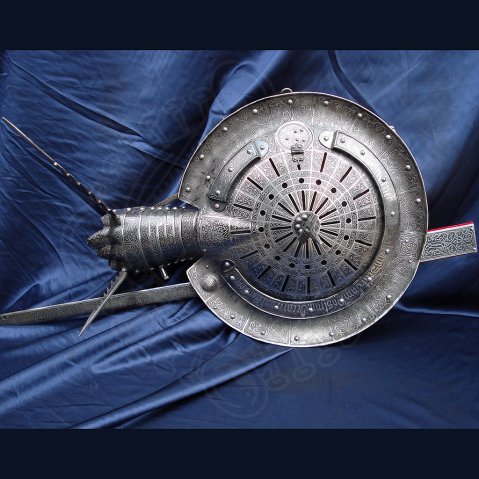 It is a small round steel shield attached to an armour gauntlet. It has two spikes on the gauntlet, one barbed spike on the centre of the shield, an expandable sword blade attached to the back of the shield. Our replica of the Lantern Shield includes also the small oil lantern inside the shield that was to shine through the opening on the face of the shield.

If you put down your email here, we will notify you as soon as the product Lantern Shield, Museum replica is in stock again.

Made after an original that is on display in the Kunsthistorisches Museum in Vienna.

Mannerism had a special fondness for technical innovations of the most unusual ways. A good example is this technical gimmick called lantern shield. It represents a particularly nonsensical invention for combats at night. It also shows the encyclopaedic joy of Mannerism to gather as many functions as possible into a single object.

The background for the development of the Lantern shield constituted a change in the habits of the 16th century fencing. The rather primitive “slashing fencing style” changes into the more complicated “stabbing fencing style”, in which all the parades were conducted in the first half of the century with a small round shield (buckler), in the second half of the century with the parrying dagger. The parrying left-handed daggers were often equipped with devices for blades breaking. In the construction of the lantern shield is an attempt to unite all these fencing weapons. It combines the round shield and the long gauntlet with the dagger. The expandable long blade should serve as offensive weapon, as well as the screw-spikes in the middle plate and the ankle, which also served as a blade catcher and therefore were jagged. Further blade catchers to disarm the enemy are the detached concentric plate stripes riveted onto the shield face.

Especially fanciful and unrealistic was the development of the spring-lock cover with a lantern underneath. The idea was to dazzle the enemy at night with the help of this lantern light to be able to beat it easier. In practice, the small oil lantern would probably go out in the third fencing round, or the combatant would pour the burning oil on himself and ignite himself. The whole weaponry seems to be more dangerous for the carrier than for a potential enemy!

Although the lantern shield turns out to be unusable for practical combats, it became an extraordinary topic for interesting conversations, don´t you think?

Included in these categories: Gothic shields