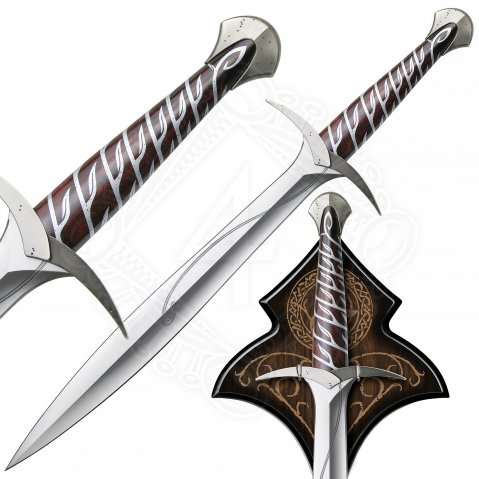 This faithfully detailed replica is a reproduction of the actual filming prop created by Weta Workshop in New Zealand and used in the motion picture The Hobbit An Unexpected Journey. United Cutlery, leader in the field of movie prop replicas, has meticulously recreated this sword, using highest quality materials only. The highest priority was set on the accuracy of all details.

If you put down your email here, we will notify you as soon as the product Sting the Sword of Bilbo Baggins is in stock again.

In the Third Age of Middle-earth, the Hobbit Bilbo Baggins is unexpectedly swept into an epic quest to reclaim the lost Dwarf Kingdom of Erebor, which was long ago conquered by the dragon Smaug. Approached out of the blue by the wizard Gandalf the Grey, Bilbo finds himself joining a company of thirteen dwarves led by the legendary warrior, Thorin Oakenshield.

On this harrowing journey, Bilbo and his Company of Dwarves come upon a troll lair in Rhûdaur, where they find two ancient Elven swords, Glamdring and Orcrist, and a knife. The exact history of these blades is unclear, but when the Half-elven Lord Elrond examines them in Rivendell, he confirms that they are well-known and ancient Elven weapons, forged by the High Elves of the West and used in the Goblin Wars to slay many Orcs in the First Age.

Bilbo claims the knife for himself, which, to someone of his stature, is more of a sword. He wields the sword through most of the quest, famously using it against the Giant Spiders of Mirkwood to save the Company of Dwarves. After Bilbo has slain his first spider he declares: I will give you a name, and I shall call you Sting.

Sixty years later, Bilbo bestows it upon Frodo to serve and protect him in his quest to destroy the One Ring.

The sword features a stainless steel blade and a hilt made of solid metal. The grip is adorned with intricately detailed engravings. Delivery includes a wooden wall display featuring motifs from The Hobbit An Unexpected Journey and a certificate of authenticity.

Included in these categories: The Hobbit Weapon Replicas