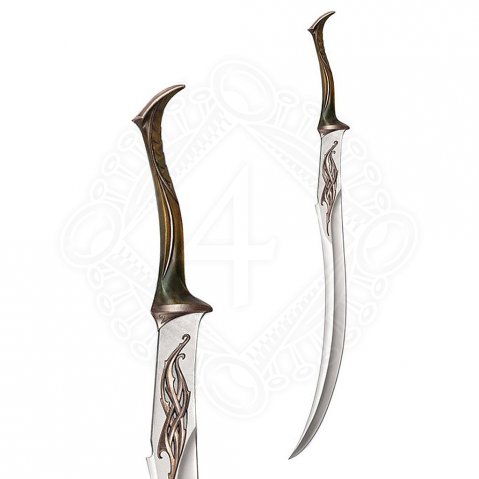 If you put down your email here, we will notify you as soon as the product Mirkwood Infantry Sword - The Hobbit is in stock again.

United Cutlery offers meticulously crafted officially licensed prop replicas of a variety of weapons from The Hobbit. New to this series are reproduction props from The Hobbit - The Battle of the Five Armies, the third film in the trilogy. Each collectable is precisely replicated from the actual film props created by the world-renowned Weta Workshop. Close attention to detail was a top priority and no effort was spared to make these replicas as accurate and visually stunning as possible. The Mirkwood Infantry Sword is an elegant and deadly Silvan design, crafted with a two-handed grip and an Elven blade forged of Silvan steel, ornately decorated with flowing Elven designs.

The Mirkwood Infantry are soldiers of Woodland Guard, sworn to protect and watch over the great forest of Mirkwood, Thranduil's kingdom. They are lethal fighters and experts in the use of various weapons, including the bow and sword. The Mirkwood is located to the north of Middle-Earth, east of the Anduin River. It was formerly known as Greenwood the Great, but after the end of the War of the Last Alliance, in which Sauron lost the One Ring, his mind moved into the fortress of Dol Guldur, in the southern part of the forest. Henceforth the forest was no longer safe and received its present name. In the northern part live the Silvan Elves, commonly known as Wood Elves, which include Thranduil, his son Legolas, Tauriel and other Elves.

This is decorative replica, any other use except decoration purposes is on your own risk.

Included in these categories: The Hobbit Weapon Replicas