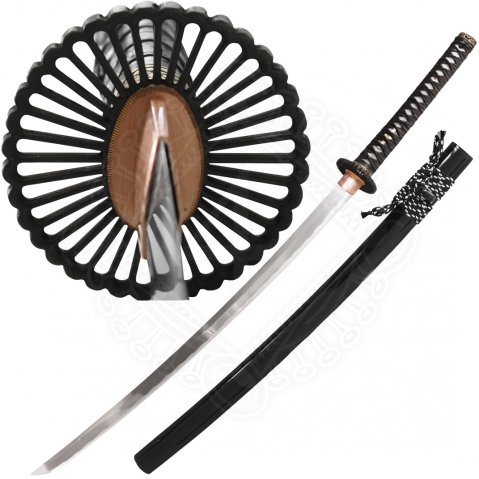 The John Lee 47 Ronin Katana is designed to reflect the strength and loyalty of the masterless samurai Ronin. Sharp, hand-forged blade made of 9260 carbon spring steel (not stainless), suitable for cutting test (approx. 55 HRC). Manufactured according to the historical original.

If you put down your email here, we will notify you as soon as the product Katana 47 Ronin for cutting tests is in stock again.

Legend of the Forty-seven rōnin

The revenge of the forty-seven rōnin (四十七士 Yon-jū-shichi-shi, forty-seven samurai), also known as the Akō incident (赤穂事件 Akō jiken) or Akō vendetta, is an 18th-century historical event in Japan in which a band of rōnin (leaderless samurai) avenged the death of their master. The incident has since become legendary.

At the beginning of the 18th century the two local rulers Kamei Korechika and Asano Naganori were commissioned by the Shogun to prepare a reception ceremony for the Emperor's emissary. The two were referred to the corrupt ceremony master Kira Kozuke, who was to teach them about court etiquette. But he expected generous gifts for that. In contrast to Kamei, Asano denied, and he was particularly badly taught, abused, and provoked by the master of ceremonies. After some time of humiliating, Asano´s patience reached its limits and he attacked Kira with his knife. Although he only injured him slightly, the death penalty was the result of this offense and Asano committed Seppuka - ritual suicide.

Asano was a master of 47 samurais who, by his death, became Ronins (masterless samurai). Although they knew that bloodshed would mean their own death, they forged a plan to assassinate the Master of Ceremonies. After months of preparation, they finally managed to penetrate Kira's estate, to execute him and to cut off his head.

After they had laid Kiro´s heads on Asano's tomb, the Ronin surrendered. Since they had avenged their master, and had thus acted in the sense of the samurai's honorable code, the Shogun allowed their suicide through Seppuka, so that they were not treated as usual criminals.

This event is considered an outstanding example of the unconditional loyalty of the Samurai to their Lord. The 47 Ronin Katana of John Lee should reflect the strength and loyalty of the masterless samurais.