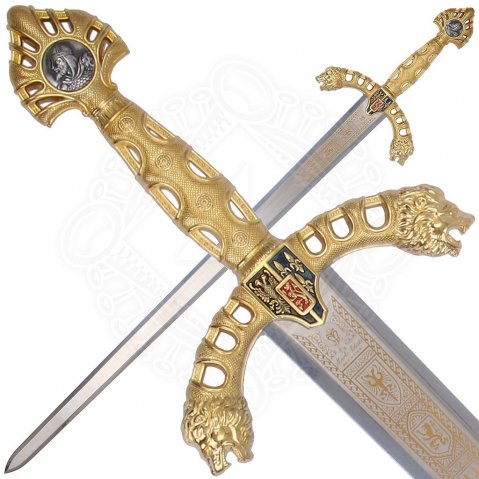 Roland´s brave deeds were put down thanks to the Roncesvalles battle (August 15th, 778). The Charlemagne’s troops, coming back from the siege of Zaragoza, suffered in the Pyrenean pass of Roncesvalles an attack from the Vascue tribes from the moors. The narrowness of the pass and weight of their weapons favoured the success of this attack on the Carolingian rear-guard. In this tragic event Roland died, but his legend took him into the memory of literature (Chanson de Roland, Roland stat, Orlando Furioso, etc.) as the hero, who faced 100.000 Saracens with his magic sword “Durendal”, a personal present from his lord Charlemagne, and his horn “Oliphant”. Legends say that with a blow of Durendal, he opened a pass on the Pyrenees, known today as “Bréche de Roland”.

If you put down your email here, we will notify you as soon as the product Durendal - sword of the legendary Roland is in stock again.

Durendal or Durandal is the sword of Roland, legendary paladin of Charlemagne in French epic literature. It is also said to have belonged to young Charlemagne at one point, and, passing through Saracen hands, came to be owned by Roland.

High Quality Sword of the exclusive Collection "Historical, Fantastic and Legend Swords" made by MARTO.

Made in Toledo (Spain).

This is a fantasy sword, there is no original sword it is based on.

Roldán, was a historical commander of the Franks in the service of Charlemagne, and count of the Brand of Brittany. He died in the battle of Roncesvalles at the hands of the Vascones on August 15, 778. Charlemagne's troops, returning from the siege of Zaragoza, suffered in the Pyrenean pass of Roncesvalles an attack by Basque tribes assisted by Muslims. The narrowness of the passage and the weight of the armament of the Carolingian army favored the success of the ambush on the rear of the Franks.

In this tragic episode Roldan died, but legend made him go down in the annals of literature (Chanson de Roldan, Rolandstat, Orlando Furioso, etc.) as the paladin, who with his magic sword "Durendal", a gift from his lord Charlemagne , and with the horn "Oliphant" he faced 100,000 Saracens. With the blow of the sword he opened a passage between the Pyrenean mountains that is still called “Bréche de Roland” today.

Durandarte or Durandal was the sword of Roldán, paladin and nephew (this relationship is purely literary) of Charlemagne (at that time King Carlos).

When he was knighted at the age of 17, Roldán received the sword from the hands of Charlemagne, a sword that kept several relics and that Roldán mentions after splitting the rock in which he tried to break Durandarte, so that it would not fall into the hands of the infidel Basques (proof of the quality of this legendary weapon), and that they are: a tooth of San Pedro, blood of San Basilio, hair of San Dionosio, as well as a mantle of Santa María.

Durandarte accompanied Roldán until his death in the battle of Roncesvalles. In the two songs (La Chanson de Roland and El cantar de Roncesvalles) it is mentioned that Charlemagne finds him with the sword at his side.

According to the Legend, Roldán's sword is found in the Carucedo Lake, where Roldán threw the sword into the water before dying to prevent it from falling into enemy hands. Another legend tells that the Leonese knight Bernardo del Carpio after defeating Roldán took the Durandarte sword with which he was later buried in Peña Longa. Carlos I, knowing the existence of the sword when he disembarked in Laredo, passed the grave of Bernardo del Carpio, and took the sword that would accompany him for much of his life.