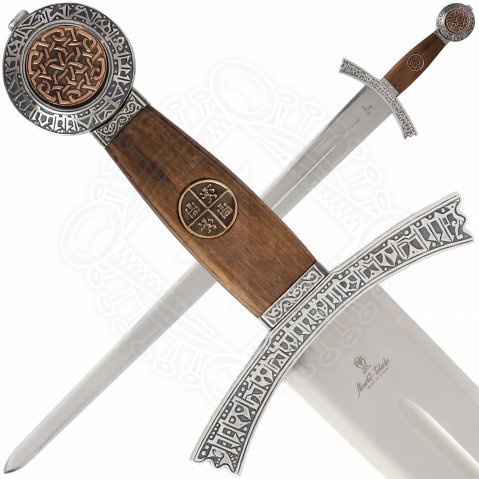 Frame- Classic cross mount with slightly curved fallen arms and lobed knob. Cross- A rich ornamentation is carved on both sides, possible Arabic inscription that is repeated without order.

If you put down your email here, we will notify you as soon as the product Sancho IV Sword is in stock again.

Given the dimensions of the grip, it corresponds to the hand of a man of medium build, so Sancho IV judging by his remains was a frankly tall man. This suggests whether the Sword like the crown, was inherited from his father as was customary.

Sancho IV of Castile (1258 – 1295) called "el Bravo", was the King of Castile, León and Galicia. He took control of the kingdom when his father Alfonso X died in 1284. This was all against the wishes of their father, but Sancho was crowned in Toledo nevertheless. Just before succumbing to a fatal illness, he appointed his wife, María de Molina, to act as regent for his nine-year-old son, Ferdinand IV. He died in 1295 in Toledo.

At his death, the body of Sancho IV was buried in the Cathedral of Toledo, thus fulfilling the will of the monarch.

In 1947 the remains of the mummified king were found, in good condition, the sovereign carrying a Franciscan habit attached with a Franciscan cord. The sovereign, who in life had to exceed two meters tall, wore a crown of silver gilt adorned with Roman cameos and sapphires. Next to the corpse a Sword with an overgrown handle, and on the blade of the sword an inscription was engraved, of which only a few fragments were preserved, were engraved.

The sword is an important finding, it is a classic sword of the Middle Ages, S.XIII, cut and tip.

The sword was found in excellent condition. It is a sumptuous weapon for its time, worthy of a Castilian monarch.

It is exposed to the public in the Tapestry Museum of the Cathedral of Toledo, along with the crown and pillow of the same trousseau.

Blade-Highlights the fineness of scuffing and mirror polishing