Holy Lance of Longinus, The Spear of Destiny 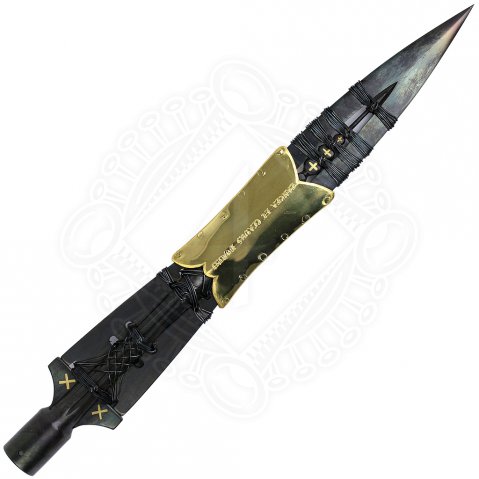 It's handmade replica Holy Lance of Longinus of blackened steel and brass. On the brass cover is engraved: „LANCEA ET CLAVUS DOMINI“ (THE LANCE AND NAIL).

Holy Lance of Longinus, The Spear of Destiny

The Holy Lance (also known as the Spear of Destiny, Holy Spear, Lance of Longinus, Spear of Longinus or Spear of Christ) is the name given to the lance that pierced Jesus' side as he hung on the cross in John's account of the Crucifixion. Further information to the Holy Lance.

The last of our illustrative pictures shows a copy of the Fresco by Fra Angelico, Dominican monastery at San Marco, Florence, showing the centurion Longinus piercing the side of Jesus on the cross with the holy lance (c. 1437–1446).

Please note: Originals of polearms often reached lengths of more than two meters (79 inches). This is more than the transport restriction allows. If you order this weapon replica with a wooden pole, it will be delivered in parts with a ca 198cm (78ichens) long wooden pole. You will have to assemble the parts yourself. All parts including rivets are included in the delivery. All needed pins to connect up the pieces including the metal strips that run down the shaft and the leather fringes are supplied.

Included in these categories: Lance tips and spearheads