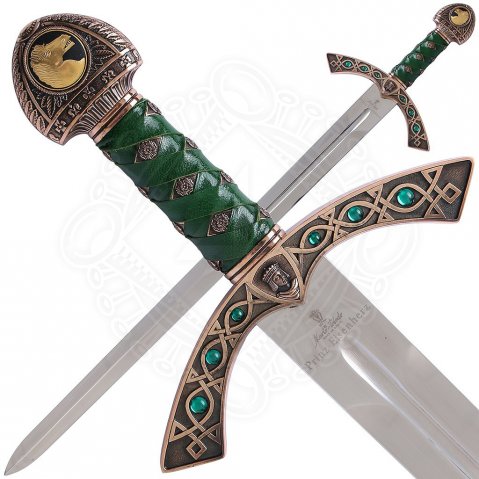 The grip parts have bronze finish. The sword blade is of hardened stainless steel.

If you put down your email here, we will notify you as soon as the product Sword Prince Valiant is in stock again.

This is just a decorative item, not suitable for combat or any other practical use!

Prince Valiant in the Days of King Arthur, or simply Prince Valiant, is a long-run comic strip created by Hal Foster in 1937. It is an epic adventure that has told a continuous story during its entire history, and the full stretch of that story now totals more than 3700 Sunday strips. Currently, the strip appears weekly in more than 300 American newspapers, according to its distributor, King Features Syndicate.

Edward, the Duke of Windsor, called Prince Valiant the "greatest contribution to English literature in the past hundred years." Generally regarded by comics historians as one of the most impressive visual creations ever syndicated, the strip is noted for its realistically rendered panoramas and the intelligent, sometimes humorous, narrative. The format does not employ word balloons. Instead, the story is narrated in captions positioned at the bottom or sides of panels. Events depicted are taken from various time periods, from the late Roman Empire to the High Middle Ages, with a few brief scenes from modern times (commenting on the "manuscript").

While drawing the Tarzan comic strip, Foster wanted to do his own original newspaper feature, and he began work on a strip he called Derek, Son of Thane, later changing the title to Prince Arn. King Features manager Joseph Connelly eventually renamed it Prince Valiant. In 1936, after extensive research, Foster pitched his concept to William Randolph Hearst, who had long wanted to distribute a strip by Foster. Hearst was so impressed that he gave Foster ownership of the strip.