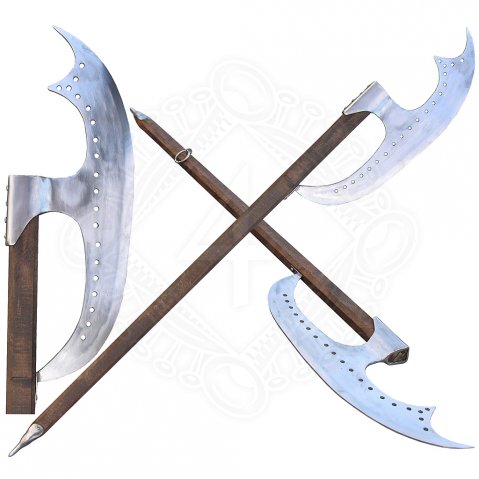 This Long Poleaxe Bardiche is a type of polearm known in medieval and renaissance Europe, especially in Eastern Europe and Russia where it was used instead of the halberd.

Occasionally weapons of this form were made in Antiquity and the Early Middle Ages, but the regular and massive usage of bardiches started in early 15th century Russia (some sources name the late 14th century). It was likely developed from the Scandinavian Broadaxe, but it only appeared in Scandinavia in the late 15th century. In the 16th century the bardiche became a weapon associated with streltsy (Russian guardsmen armed with firearms).

The blade varied greatly in shape, but was most often a long, cleaver type blade. The distinction was in how the blade was attached to the pole. The bardiche blade was attached to the pole either via two sockets (one at the top of the pole and one lower, at the base of the blade) or one socket at the top and one surface mount at the base, effectively mounting the heavy blade to the wooden shaft. This construction is also seen in Scottish polearms, such as the Lochaber axe and Jeddart staff, and bardiches are known to have been imported into Scotland in the 16th and 17th centuries Depending on the design of the particular weapons in question, at times a bardiche may greatly resemble a voulge.

While the blade was often very long for an axe (usually exceeding 2 feet (60 cm)) the shaft was one of the shortest of all polearms; rarely did it exceed 5 feet (1.5 m) in length. It relied more on the weight of its heavy blade to do the damage than a swing from a long pole. This makes the bardiche more similar to the Danish axe, in some respects, than to a true polearm.