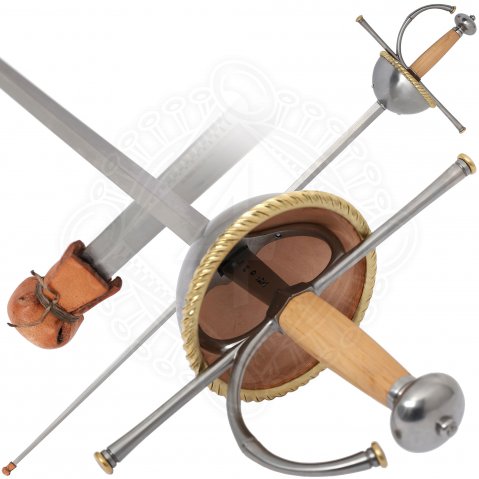 A popular weapon of the mercenary infantry and the lower social class. It is based on the original discovered in the river Rhine.

If you put down your email here, we will notify you as soon as the product HEMA Rapier 100 developed in collaboration with Martin Fábián is in stock again.

Note: The specified parameters were measured on the photographed specimen. Due to the extent of manual work, these parameters can vary slightly from piece to piece.

If you are interested in this rapier, we recommend reading the Melbourne Fencing Society review.

A few words from Pavel Moc about the HEMA Rapier 100

From the 2nd half of the 16th century, Spanish and Italian fencing schools, which clearly preferred stabbing techniques, started to show and later dominate with European swordsmen. At that time, weapons also began to change. The blade was getting narrower, longer and the weight lowered. A simple crossguards got support rings, protecting the index finger sticking out of the crossguard and was placed on the blade. This detail began the drastic change of fencing techniques. Simply put, the way a weapon is held determines the sword and rapier techniques. The so-called Spanish bell cord was soon proven to be the most effective hand protection. Hand protection in the shape of a spherical cap perfectly protects the fencer’s hand. In luxury weapons of the highest nobility, the surface of the bell was cut with refined décor, which gave the impression of the finest lace. For today’s swordsmen, we relied on the simpler variants of this weapon, but we did not want it to be a utilitarian weapon. We intended to create a rapier, which clearly declares its noble predecessors with the craftsmanship detail – a ring in the shape of a string reinforcing the hem of the bell, the bell being lined with leather and absorbing the shocks of the opponent’s blade, ornamental rivets at the end of the cross guard and last but not least, the tip of the weapon fitted with tough pigskin cover.

This weapon is made by of one of the best swordsmiths in Czechia - Mr. Pavel Moc. His bladed weapons are generally an "artistic license" of historical originals. They are the result of decades-long-experience and discussions with historians, swordsmen and colleagues in the industry. If the replica does not directly correspond to the preserved original, it is based on contemporary iconography, illuminations and its final form is a "well informed stylization".

The blade is made of spring steel for dynamic strain CSN 14260 (DIN 54SiCr6, GOST 60S2CHA) or CSN 15260 (50CrV4 DIN 1.8159). The steel is heated to 820-860° C and then immersed into oil. The steel is then tempered at 540-680° C according to the prescribed technical standards in computer-controlled-ovens. The first kind of steel has a slightly higher elasticity, the second one can be slightly more hardened. Both types of steel are oil-quenched and tempered to a hardness of 48.5 +/- 2 HRc.