The most famous and common cold weapon used throughout history, an effective tool for killing, and indispensable part of the image of every hero – a sword. As a symbol of bravery, war as well as social status, swords were used to decide important battles, to crown new kings and, sometimes, to reconcile two rival parties. Some swords played an important role in shaping our history, other swords became indelibly engraved in memory of mankind due to legends and epic poems. Which swords should you know?

Charles the Great, king of Franks and the first Emperor of the Holy Roman Empire, is indubitably one of the greatest rulers of all time. He wielded a famous sword called “Joyeuse” (joyful). The origin of the sword dates back into 9th century, but some historians claim that it’s even older than that. Joyeuse was used in the coronation ceremonies of the French kings – for the first time in 1270 at the coronation of Philip III, and for the last time in 1824 at the coronation of Charles X. Some legends claim that there were three swords forged from the same steel – Joyeuse, Durendal and Curtana. In the legends surrounding the king Charles the Great, they are described as extraordinarily powerful swords imbued with magical powers. Joyeuse was allegedly capable of outshining the sun and blinding enemies in battle. The accounts of how Charlemagne obtained the sword differ. Some sources claim that the sword was forged by the famous blacksmith Galas and took three years to complete. Other sources state that he got the sword as a wedding gift from one of his brides. The secret to the sword’s magical power was hidden in its guard. It was believed that the sword-guard contained relics which granted the sword magical powers. Joyeuse has been preserved until today and now rests in Louvre, Paris.

Curtana, also known as the Sword of Mercy, is one of the five ceremonial swords used at the coronation of British kings and queens. The origin of the sword dates back into 11th century. Some commentators claim that the weapon once belonged to Edward the Confessor, one of the last Anglo-Saxon kings. The name “Curtana” comes from the Latin word “curtus”, meaning “short”. The sword has a steel blade inlaid with copper and a wire-bound grip. The leather sheath is bound in crimson velvet with gold embroidery. The steel blade’s tip is also interesting – it used to be sharp, then jagged, but now is squared off and blunt. The sword itself is surrounded by many legends. According to one of them, the poem “Chevalerie d'Ogier de Danemarche” from 13th century, Curtana was the sword of Ogier the Dane, a knight of Charlemagne. The sword is also mentioned in the Song of Roland, in which Ogier the Dane makes a significant contribution in the war against the Saracens. Another legend suggests that the sword belonged to Tristan, who fell in love with the Irish Princess Isolde, but their love story did not have a happy end. Several myths surround the broken tip. According to an old story, an angel broke it off in order to prevent bloodshed. A historical replica of the sword can be seen in Great Britain today, as part of the coronation jewels.

Another of the great heroes of old epic literature was Roland, legendary paladin of Charlemagne. There are not many historical mentions of the actual Roland. However, he plays an important role in many legends and medieval stories. His most notable adventures are described in the epic poem Song of Roland, where the magical sword Durendal is mentioned. The sword was capable of cutting through giant boulders of stone with a single strike. The supernatural powers of the sword were the result of relics allegedly forged into the sword. The epic poem specifically mentions a tooth of Saint Peter, hair of Saint Denis and a piece of raiment of Mary, mother of Jesus. According to legends, the sword was brought by an angel to help its wielder fulfil God’s will. That indeed came to happen as the paladin took part of the battle of Roncevaux, a major battle of Christians against the Saracen army. 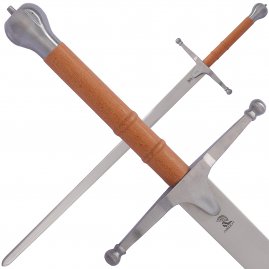 Roland was, however, mortally injured at the battle, and, before he succumbed to his injury, he tried to destroy the sword by hitting it against blocks of marble to prevent it from being captured by the enemies. But the sword proved indestructible, so Roland threw it off the cliff. It is perhaps worth mentioning that a mysterious sword was seen embedded in a cliff wall in the chapel of Notre Dame de Rocamadour in France. Local monks claim that the sword is, in fact, the legendary Durendal.

Originally a small landowner from Scotland, who later became one of the most important leaders during the Wars of Scottish Independence and one of the greatest national heroes – William Wallace. In 1297, the Scottish resistance led by William Wallace won at the Battle of Stirling, and Wallace was appointed Guardian of Scotland. He kept the title until his defeat at the Battle of Falkirk. A few years later, Wallace was captured, found guilty of treason and executed by king Edward I. His story has inspired several adaptations, the most famous of which is the film Braveheart (1995), starring Mel Gipson as Wallace. William Wallace, just as many other important historical figures, owned a sword that was claimed to have magical powers. The two-handed weapon was 163 cm long and the hilt and belt were said to have been made from the dried skin of Hugh Cressingham, an English treasurer. The Wallace Sword has been preserved in a slightly modified form until today and is kept at the Wallace Monument in Stirling.

King Arthur and his sword Excalibur belongs to the best-known legends and myths. The legend starts in the period when the Saxons settle down on the British Isles and clash with the local Celtic population. The actual existence of the legendary king has been up for debate and few modern historians can come to an agreement. But many archaeological discoveries confirm a fast-paced Saxon expansion that suddenly comes to a halt after a few years. The only logical explanation would be the existence of a strong leader who pushed the invaders out. Arthur allegedly wielded a magical sword Excalibur. According to old Welsh legends, the blade was decorated by two golden serpents and when drawn, it was said that flames of fire burst out of the sword and blinded the enemies. The sword was a gift from the Lady of the Lake and was a symbol of rule blessed by the gods. Other legends tell another version of the story. Excalibur was said to be wedged in a stone and the only person able to pull it out was the man worthy to rule over England. Arthur pulled the sword out, aided by the wizard Merlin. Whether Excalibur was based on reality or a legend is until today a subject of debate. The fact is, however, that there are no historical mentions of it.