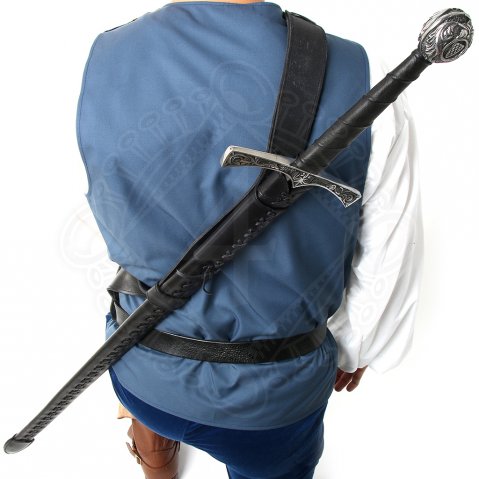 We will make a made-to-measure scabbard for you corresponding to the size of your sword. If you order the product with a sword, fill in this table of dimensions after you have completed your order. The baldric itself may be made to measure. If the standard size does not suit you (sports figure XL with the height of about 175cm), send us a slanted circumference of your trunk copying the position of the baldric as shown in the photo on this page.

Please select the shoulder over which the sword should stick out. Our model is a right-hander and therefore the sword sticks out over his right shoulder.  An ingenious knot is located on the front strap of the baldric that provides for fast unfastening of the harness, if the need be.

Warning: This baldric with the scabbard is designed for transport of long swords and not for the unsheathing of the sword at short notice because the sword is fixed in the scabbard with a leather strip that is tied up around the scabbard's neck; this prevents the sword from falling out of the scabbard during a run or when its wearer is bending forwards.

Please note: This product is made by hand from genuine leather. This is a purely natural material. Minor differences in the colour and surface texture are its natural characteristics. These small imperfections do not decrease the value of the product. Each piece is to some extent an original.

Included in these categories: Back sword scabbards