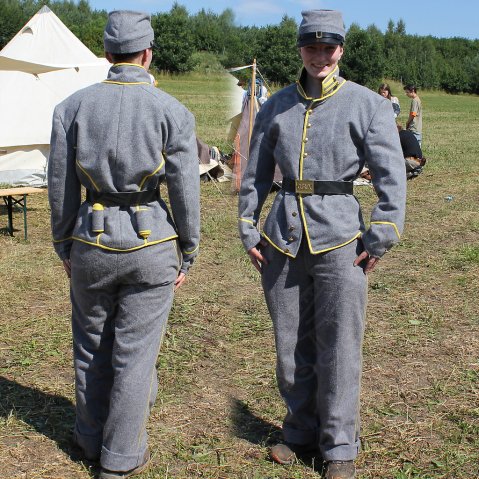 Confederate Infantry Uniform were quite common during the early 1800's. Many military academies wore uniforms of this color. Since there were several military schools in the South, it was quite natural that they adopted this color.  By 1863, the confederate army began to use a common uniform design. All infantry officers and enlisted men would wear a grey uniform that included a frock coat hanging to mid thigh.

This Confederate infantry uniform consists of the following parts:

The trousers come standard with side seam pockets. The woollen CS KEPI CAP has a leather brim, sweatband and adjustable chinstrap.  The jacket and the trousers are decorated with yellow braiding.

This Confederate Infantry Uniform is made exactly to your measure at no additional charge. Please fill in this measurement chart after finishing your order.

Information about cleaning and care.