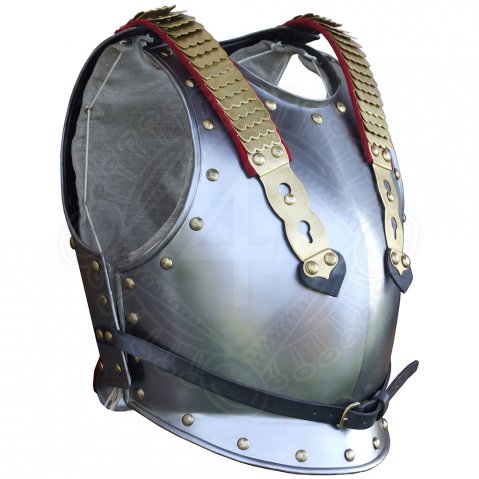 Cuirassiers were mounted cavalry soldiers equipped with armour and firearms, first appearing in late 15th-century Europe. They were the successors of the medieval armoured knights. This French term means "the one with a cuirass" (cuirasse), the breastplate armour which they wore.

The first cuirassiers did not appear very different from the fully armoured Late Medieval man-at-arms. They wore three-quarters armour that covered the entire upper body as well as the front half of the legs down to the knee. The head was protected by a close helm, burgonet or lobster tail pot helmet, usually worn with a gorget for the neck. The torso was protected by a breast and back plate, sometimes reinforced by a 'placate'. The arms and shoulders were fully armoured with pauldrons, rerebraces, elbow couters and vambraces. Armoured gauntlets were often abandoned, particularly for the right hand, as they interfered with the loading of pistols. Long tassets, instead of a combination of short tassets with cuisses, protected the front of the thighs and knees, Riding boots were substituted for lower leg armour (greaves and sabatons).

Weapons included a pair of pistols in saddle holsters, these were the primary weapons instead of a lance, a 'horseman's pick' (a type of war hammer) was sometimes employed and a sword. Horse armour was not used.

The Cuirass of the French Cuirassiers will be made to measure to your exact size. To submit us your measurements, please use the following measurement chart. Please fill in the Data 2a-d, 3a, 3b, 3d, 3f and 3j-p. The cuirass is worn over the uniform. So please take the measurements over your uniform on.