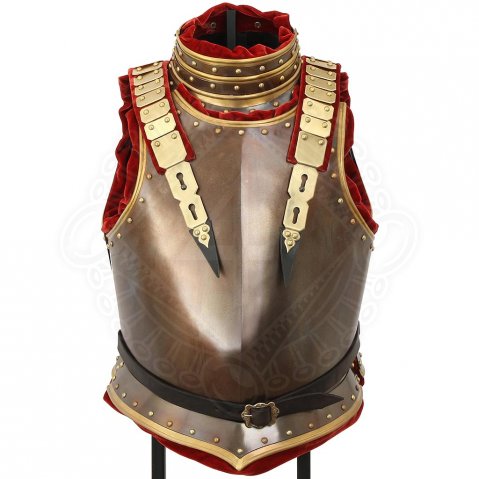 The cuirass Prince Eugene of Savoy consists also of brass parts like borders, rivets and buckle on the belt. The breast plate is lined with red velvet as one can expect at armour for a high-ranking nobles.

Prince Eugene of Savoy (* 18 October 1663, † 21 April 1736) was a general of the Imperial Army and statesman of the Holy Roman Empire and the Archduchy of Austria and one of the most successful military commanders in modern European history, rising to the highest offices of state at the Imperial court in Vienna. Spanning six decades, Eugene served three Holy Roman Emperors: Leopold I, Joseph I, and Charles VI. He first saw action against the Ottoman Turks at the Siege of Vienna in 1683 and the subsequent War of the Holy League. However, the Prince's fame was secured with his decisive victory against the Ottomans at the Battle of Zenta in 1697, earning him Europe-wide fame. Eugene enhanced his standing during the War of the Spanish Succession, where his partnership with the Duke of Marlborough secured victories against the French on the fields of Blenheim (1704), Oudenarde (1708), and Malplaquet (1709). He helped to save the Habsburg Empire from French conquest; he broke the westward thrust of the Ottomans, liberating central Europe after a century and a half of Turkish occupation. (Source: Wikipedia)

The Cuirass Prince Eugene of Savoy will be made to measure to your exact size. To submit us your measurements, please use the following measurement chart. Please fill in the Data 2a-d, 3a, 3b, 3d, 3f and 3j-p. The cuirass is worn over the garment.