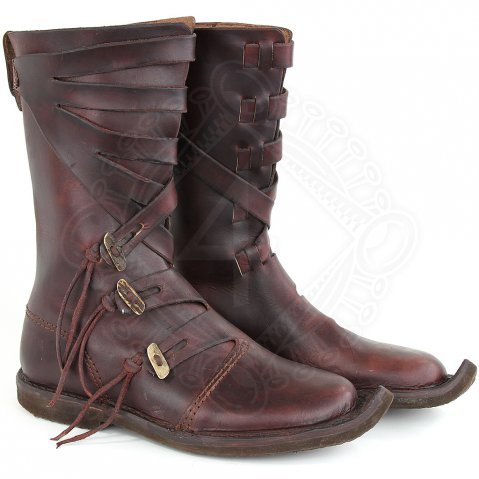 Viking high boots Housecarl are available in standard EUR sizes. If you select the size "made-to-measure", they will be manufactured according to this measurement chart. Please fill it in after you finish your order.

Is the boot shaft or instep loose or too tight?

Please note: The part of boot above the ankle is a so called design-shaft that does not have a protective function usual at modern boots. The shaft halves may not close completely and the possible wedge-like opening is not lined with a flap. This is a natural feature of these boots that in no way diminishes their value or functionality. The size of the wedge can be influenced by the thickness of the socks.

Housecarls (from Old Norse húskarlar, also Huscarl) were warriors of the personal bodyguard of Scandinavian nobles and kings. The name comes from the Old Norse and consists of the elements hús (household) and karl (free, weapon-capable man) together. This institution also existed in Anglo-Saxon England after its conquest by the kingdom of Denmark in the 11th century. In England, the royal housecarls had a number of roles, both military and administrative; they are well known for having fought under Harold Godwinson at the Battle of Hastings. The entirety of the Housecarls was also referred to as Hirth (house power) in the Anglo-Saxon area. In later times, all the troops of a noble house were referred to, which were in part the only professional soldiers of the kingdom. The remainder of the armies consisted mostly of militia called Fyrd, compulsory peasants, and occasionally mercenaries. The number of Houscarls was usually less than 2000 soldiers in the kingdom.

Included in these categories: Leather Boots