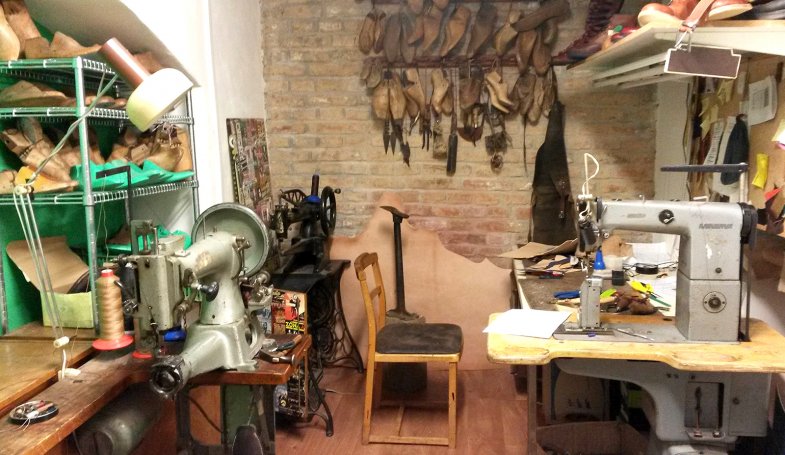 Lukáš Špulák was born in 1982 in Broumov. He´s married and has one son. He lives in Prague, Pilsen and Broumov. He studied landscaping and ecology. Since 2009, he has been working on shoe production. He supplies various movie productions and music bands.

Feeling unfulfilled: from businessman to shoemaker

Lukáš used to work as head of the sales department of the mobile operator. However, he didn't like the work and after a few years of work, burnout syndrome appeared.

His hobby was historical martial arts and good shoes are important for every swordsman. He ordered shoes from the then famous Ben Hrubeš and on the day they were to be picked up, he felt particularly bad at work at that time. When he picked them up, he asked the master shoemaker if he was looking for a helper. He replied: "If you are serious, I am expecting you tomorrow morning.". At that time, 2009 was written and since then Lukáš Špulák has devoted himself to this craft.

In 2014 he set up his own studio (handicraft workshop). In addition to historical shoes, he is also engaged in the production of modern, social and festival shoes. His workshop not only produces shoes, but also bags, sheaths, lamellar leather armor and much more.

He is constantly educating himself, visiting other specialists from the industry and discovering new technologies in manufacturing and leather processing. He also saves old, still functional machines, which unfortunately often end up as scrap in bulk raw materials after the intervention of ignorant insolvency administrators. Unfortunately, this is the result of the extinction of this handicraft in the Czech Republic - a country with a long and famous history of footwear!

Lukáš mainly uses cow leather processed in Otrokovice for the production. However, some special materials he obtains from Argentina. In principle, no water buffalo skin from India is used in his workshop, since this leather is permeable to water and tanned with chromium-containing agents that can cause cancer. These  reagents are prohibited in the EU, paradoxically not the import of raw materials or final products made from them!

Since he works up to 100 hours a week, work has become his hobby. He says: “You can see the result of the work immediately. If something went wrong in my previous job, e.g. a clause in the contract was not properly conceived - the result came with a delay - quite unexpectedly. On the other hand, if I screw up my work, I see the mistake immediately! "

In his workshop works according to the quantity of orders up to 5 pair of hands.. Lukáš enjoys always creating something new. For example, for Christmas he made pumps for his wife. It makes him happy to see a product of his own on TV or in a magazines. He had the honor of supplying shoes to several world-famous TV series. However, he cannot name them because he is contractually bound to secrecy.

And what else does he like besides his job? Rock music, computer games and long walks in the mountains.