Home ArticlesWeapons The Spear of Destiny

The Spear of Destiny 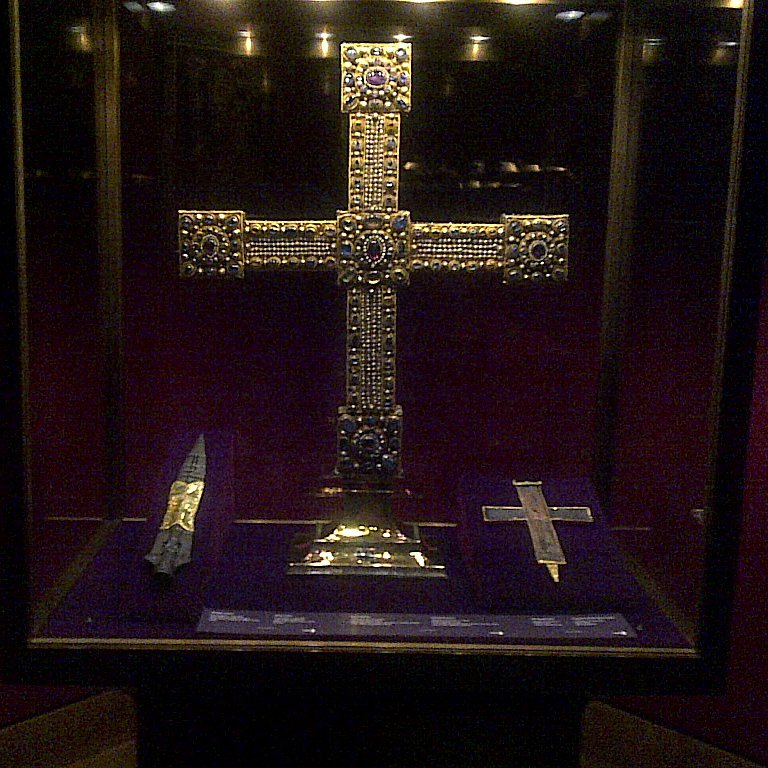 Have you heard about a spear which according to the old legends gives its owner the power to dominate the world? And that a lot of decisive battles have been won by military leaders who possessed it? It is known by several different names – The Spear of Destiny, The Holy Lance, The Holy Spear or The Lance of Longinus. Longinus was a Roman soldier who stabbed Jesus Christ with his lance. Since that moment the lance had been held by many important statesmen through the world history.

Everything started after the crucifixion of Jesus. Roman soldiers were going to break his legs. It was common practice to speed up the death of crucified ones. However, Longinus (which is actually his traditional Christian name – his civic name was probably Gaius Cassius) refused to do that and stabbed him in the side instead. According to the gospels and legends blood and water came out and when blind Longinus accidentally touched his eyes with a stained hand his sight miraculously returned.This is how the lance gained its name The Holy Lance or The Lance of Longinus.

The holy spear belonged to various soldiers and its fascinating story about Jesus and St. Longinus was turning them into Christians. Later it became possession of Roman emperors and other various kings. Its holders reached great success and had significant impact on the world’s affairs. Among owners of this relics were about 45 different heads of states. However, its authenticity has been challenged several times and today we are not even certain whether Longingus used his lance or temple guard leader’s one. Furthermore, there are more spears claimed to be the only true Lance of Longinus. We can safely say there were at least two which were connected with most powerful men of European history.

Let’s start with the one which was discovered during the first crusade in 11th century. The crusaders were almost defeated when they suddenly found the spear in a temple in Antioch city, Syria. The spear made them much more confident believing they could change history and they attacked local Muslim troops. Situation changed dramatically and the crusaders won. That time there was another spear of destiny in possession of Henry IV, the Holy Roman emperor, and perhaps in order to underline its authenticity he decided to embed in it a nail by which Jesus Christ was nailed to the cross. The crusaders slowly stopped to believe in their spear from Antioch and soon they were losing the battles and eventually had to leave Syria. The spear was sold to The Republic of Venice. The city experienced enormous expansion and took control practically over a half of the Mediterranean. Later the French kings owned it and their kingdom became world superpower. During The French Revolution in 18th century the spear disappeared in the chaos and was lost. It has never been found again. Was that the authentic one? Does it still exist? And if so where is it now? We can only guess.

From Charlemagne to Hitler

The second one was owned by emperors like Charlemagne, Otto I the Great, already mentioned Henry IV, Frederick Barbarossa and Charles IV. All of them became strong leaders influencing almost the entire continent. During the Hussite wars in Czech kingdom the spear was transported from Prague to safer Nurnberg where it was kept until Napoleonic wars. To avoid Napoleon of getting the mystic spear it was moved to home city of Habsburg royal family - Vienna. Napoleon never owned the relic but about 140 years later it was taken by Adolf Hitler. His armies conquered most of the Europe, but his “3rd Reich” collapsed shortly after Americans gained the lance.

US Army general George Patton was interested in captured spear and its history. By using up to date scientific methods it has been revealed that the spear was actually made in 7th century AD but the nail really comes from 1st century AD so it can be from the Jesus’ cross. The spear is now exposed in Hofburg palace museum in Vienna. Some say it is only a copy and the original one is secretly kept in the USA – today’s greatest superpower.

There are still many mysteries around this object. True Longinus’s weapon or not, due to its amazing history it has always been irresistibly attracting every conqueror who wanted to control the world. It is like a sceptre of supreme ruler.