Home ArticlesInteresting facts of the past Templars 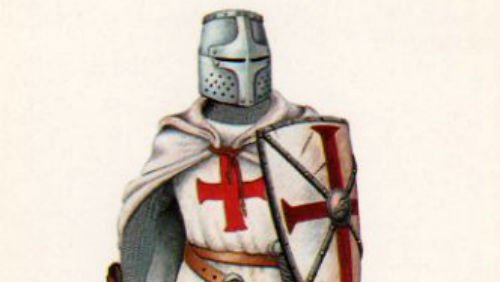 Only a few orders have raised such enormous interest and intense emotions as the Order of the Templars. Both loved and hated, the Knights Templar had a gold poach in one hand and a sword blessed by the God of Christianity, in another. The primary quest of Templars was to serve as Defenders of Christianity, protect pilgrims on their way to Jerusalem and even protect the Holy Grail. But who were they really? What did their life look like? What was the true reason for the existence of their order?

Foundation of the Order

After Europeans in the First Crusade captured Jerusalem in 1099, many pilgrims travelled to the sacred sites in the Holy Land. Because travelling in the 12th century was not particularly safe, someone had to protect Christian pilgrims from bandits and marauding highwaymen from Tyre and Ashkelon. For this reason, the order for the protection of these pilgrims called Poor Knights of Christ and the Temple of Solomon was established by eight knights including Godfrey de Saint-Omer and Hugues de Payens, who became the first Grand Master of the Knights Templar. The exact date of this historical event is not known, but the historians suggest the year 1119 or 1120. Right from the beginning of their existence, the Templars enjoyed the support of the king, the nobility and important pilgrims. That, however, changed later on.

The Crusades, initiated by pope, started primarily to recover the Holy Land from Muslim rule. However, it later became a tool to capture new territory and to created new Crusader states. All this was done, of course, “for the greater good” and with the intention to purify the land from all enemies of the Christian God and prevent Islam religion from spreading into the Christian countries. The Templars took part in nine Crusades, spanning across Jerusalem, Egypt, Greece, the Baltics, Scandinavia and Palestine. The Holy Wars were called not only against the enemies of Christianity, but also against the gentiles. The most famous examples include crusades against the Cathars and against the Hussites. The Templars became quickly known as fearless warriors, driven by religious zeal and determination to fulfil their holy duty.

Organization of the Order and the Holy Army

From the very start, the Templars were organized as a strict religious and military order. In the half of the 12th century, the rules of the order were created, containing 72 clauses. The clauses were written by Saint Bernard de Clairvaux and outlined the formal structure of the order as well as its rules and prohibitions that had to be strictly adhered to. The most important rules included common meals, prohibition of bodily pleasures, attendance of religious service and an unfailing obedience to the Grand Master. New recruits came to the Templars from all western Europe. The main motivation was support of the Holy War, but also the search for redemption from one’s sin, the possibility to fight and become famous, or simply a source of food. The Order was divided into three main ranks: the noble knights, the sergeants and the chaplains. 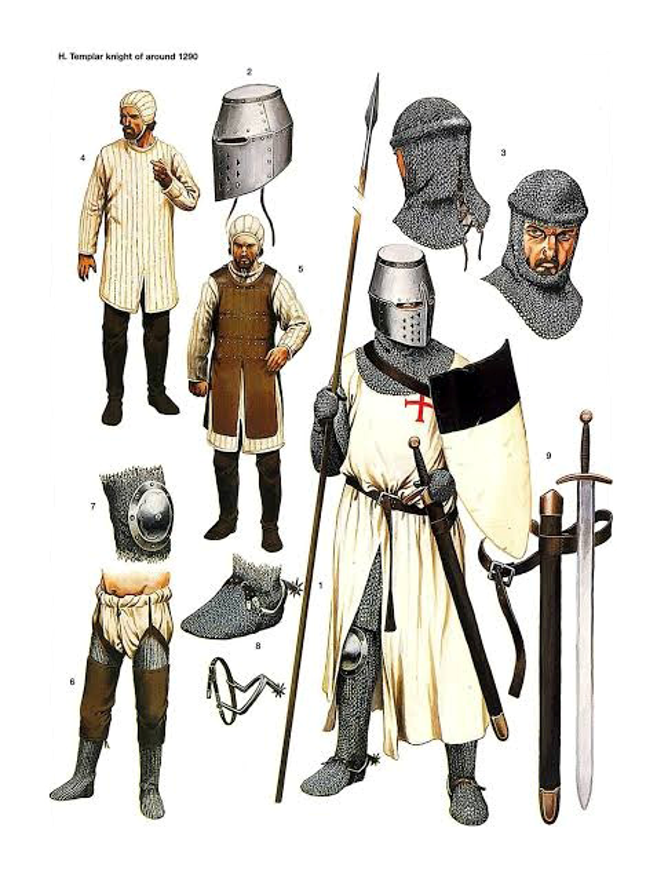 The rank of each member determined what type of Templar Armour he will wear. The noble knights were heavy cavalry and wore a white cloak or mantle with a red cross. They were equipped with a chainmail armour or ordinary metal breast plates. The usual armour also included chainmail leggings and a great helm with a narrow visor. In fights, the Templars used primarily one-handed Templar swords and a black and white Templar Shield. The knights also received a horse armour. The sergeants, who were further divided into infantry soldiers and supporters of the Knights, had a simpler armour. They wore a tabard and black Templar overcoat that also featured the red Templar cross, just like the knights’ cloak. The chainmail armour was somewhat shorter, and the helm was more open and practical for ground combat. The Templar weapons for the infantry and close combat included one-handed swords or lances. Assistants to the Knights were dressed in brown monk robes.

Thanks to an increasing and generous support of donors, the Order prospered and grew. The Templars received money, land, horses, military gear as well as food. The Templars later benefited from a wide range of services related to different forms of banking and goods transport. In their prime, the main source of income for the Templars was from the raids and from their bases. They also had several ships in their ownership which they rented to merchants – thus developing their own trading network. Another source of income was from their network of treasure storehouses and their efficient transport organization. Every pilgrim knew better than carrying around huge sums of cash that would have made them a target for robbers and bandits. The common practice was storing their money or treasure at the Templars for a fee, or have their treasure safely transported to the desired destination. The Templars were also smart bankers. As lending money in return for interest was forbidden by the church in the Middle Ages, the Templars sidestepped the ban with clever loopholes, such as calculating the interest in advance and collecting banking charges. The money borrowers often had to give the Templars the rights to their mortgaged property or valuables. The Order became so rich after some time it could afford to lend money to kings.

Their astonishing rise in wealth and power, along with protection of the Pope, did create many enemies of the Templars. The Siege of Acre (the last Templar fortress in the Middle East) in 1291 CE was a fatal blow to the Crusader ambitions. The Templars effectively lost their raison d'etre. They went into decline and faced accusations of blasphemy and immorality. The charges against them spread quickly, and the Templars were labelled criminals who do not follow the will of Pope or the Christian principles. Eventually, King Philip IV of France accused them of heresy, homosexual behaviour and secretly worshipping idols. Many Templars were arrested and tortured into admitting heresy. Those who falsely confessed were then put to death by burning on stake, including the last Grand Master, Jacques de Molay. The Order of Templars was disbanded, and their property confiscated.

Legacy of the Templars

The Templars created a brand-new model of knights. While in Early Middle Ages a knight was regarded as a warrior fighting for his own good, the Knights Templar were chaste, obedient and humble servants of God. They became an inspiration for many stories and significantly enriched the institution of knighthood. Many stories about these legendary warriors have been preserved until today. The Templars also inspired many films. They also appeared as the main antagonistic faction of the Assassin’s Creed video game. In the Czech Republic, a series called Knightfall was filmed recently which charts the quest of the Knights Templar.