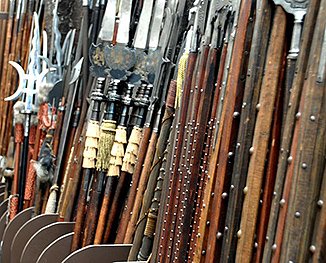 The primary weapon of Swiss soldiers of 14th and 15th century used to be a long wooden staff (Halm) with an axe (Barte) on its end. Linking these two words together gave the weapon its name. Halberds were broadly used mainly by mercenary units (called lansquenet) in the German lands (Holy Roman Empire) but became quite popular abroad as well.

The length of an halberd is usually between 150 and 180 cm (59-71 inches). Like its “older sibling” spear it has a spike mounted on its top, but there are two more tools forged on the both sides of the spike. Already mentioned axe and on the opposite side was a hook. Due to immense leverage given by the long pole the axe could perforate enemy’s plate armour or cause him a serious injury. Sometimes it could even chop a limb off with a single strike. The main purpose of the hook was to pull horsemen down. They both also help balance each other. Holding halberd was like holding three deadly weapons at once.

Its long shaft was angular and wrapped in a leather to prevent slipping or spinning in the hands of a soldier. The place where the shaft was meeting the iron part was stressed by huge forces during the combats and therefore blacksmiths often added metal strips riveted to the pole called langets.

This cheap but very effective weapon utilizing valuable properties of spear and axe could be traced as early as in 13th century southern Germany. Its development is connected with another tool similar to halberd – Haumesser (kind of a billhook) which was created as combination of a spear and a tool resembling a scythe.

Halberds soon spread across the whole empire (and abroad). Swiss infantry benefited from them the same as the Hussites did. Halberds peaked around year 1470. This important pole arm meant a real threat for cavalry. Even when the battling knight defended himself against the dreadful spike or axe, while the attacker was in advantageous distance from him, there was still the dangerous hook which might pull him down to the ground. Halberdiers were well trained to face enemy on horses and they were focused mainly on their elimination. They were something we could call anti-cavalry units. Swiss halberdiers were also armed by a hand-and-a-half sword or dagger as a secondary weapon for close combats. Later they also employed pikes which importance in the battles quickly grew.

No horsemen were safe, even the heads of states. In 1477 Charles the Bold, Duke of Burgundy was killed by a halberd in the battle of Nancy where his troops fought against the Swiss mercenaries. This single moment terminated the Burgundian Wars and considerably redrawn the map of Europe.

Although halberds were powerful weapons, they became slightly disappearing during 16th century. Technological progress allowed using of firearms which made pole arms like this one obsolete for the wars. Furthermore they were already being replaced by the pikes. However they did not fade out completely. After leaving the battlefields they were still carried by town guards. Halberds were modernised in 16th century when their spikes becoming longer and axes lighter.

Halberds role was slowly changed into a ceremonial weapons and symbols of authority carried usually by the guards at special places or events. Since they did not have to follow the hard requests of war engineering focused on functionality anymore they could be made in a lot of nice designs of art. Beautiful halberds were used by royal guards of English queen Elisabeth I. They were of course rather decorative pieces for representative purposes and were not suitable for actual fight.

Nowadays ceremonial halberds still can be found in service. For instance they are carried by Swiss Guard who traditionally patrols present smallest country in the world – Vatican City.