Home ArticlesInteresting facts of the past Sword, the Most Valuable Viking Weapon

Sword, the Most Valuable Viking Weapon

People commonly associate the Vikings with violent savages raiding more civilized nations around them. Only a few people know that the Vikings were also established traders and craftsmen. The skills of some Viking blacksmiths were so extraordinary that their weapons are said to be 1000 years ahead of their time. Were swords the most common Viking weapons? How did they forge them?

Only for the Rich

Weapon was the most important distinguishing feature of a Viking warrior. Contrary to what we see in films and series, the most commonly used Viking weapons were axes or spears. The swords were difficult to forge, which meant that only the wealthiest members of the community could afford the purchase. Some historical sources claim that the price of a sword in the 9th century was around 7 solidi (Roman currency with a weight of about 4.5 grams of gold). For comparison, this equals approximately to the price of 16 cows. Swords also often received names that expressed their uniqueness, and they were passed from one generation to the next, always father to first born son. Losing the sword meant losing a great deal of wealth. It is no surprise that the Vikings raided surrounding areas in search for treasures and new weapons. 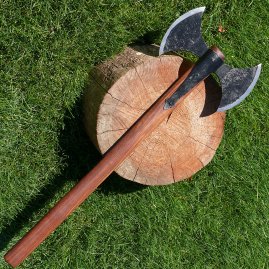 Experienced blacksmiths were required in order to produce a high-quality, reliable sword. However, the number of low-quality swords found suggests that skilled craftsmen were either scarce or unaffordable to most. How did the Vikings produce quality swords? As far as we know, the blades were produced using a sophisticated technique in which numerous thin strips of metal were interwoven together at high heat to create steel rods, then twisting the steel to form patterns and then forging the blade. Because the material was composed of both soft (low carbon) steel and hard (high carbon) steel, the resulting weapons were both strong and flexible. Famous Damascus weapons were forged in a similar way. It is possible that the Vikings had learned this technology through their business in the Middle East and had then modified it to their liking. However, this method has been abandoned after some time, as higher-quality steel became available. Swords had also abundant decorative elements. Copper, bronze and silver inlay were the most common. To protect the warrior, healing and magic stones were sometimes inserted into the swords. The sheath was no less important. It served not only as a security element, but also as a display of how exquisite the weapon is. The better and more decorated the sheath, the more expensive the sword itself. 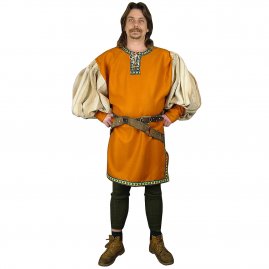 Viking Swords is the term used for cold weapons made between 8th and 11th century. Because shield was a usual part of every warrior’s equipment, the sword had to be one-handed and easy to wield. The sword weight was between one and two kilograms. The blades were rather wide and between 60 and 90 centimetres long. A characteristic feature was a short handle between the pommel and the guard for a tight fit. Over time, Viking smithery developed, and the size, shape and form of the hilt changed. This change makes it easier for historians to date the preserved swords, because each time period had a specific, prevailing style. Steel processing did not stay behind, either. New techniques of steel processing allowed for narrower blades in later time periods, shifting the centre of gravity of weapons more towards the hilt. As far as the blade is concerned, the swords made in the Viking age had both edges sharp. The tip itself is no less interesting. It was, in most cases, arcuately chamfered. This increased stability and strength, but at the expense of stabbing efficiency. That is why these weapons were mainly used for cutting. By the type of guard and pommel, we can distinguish different groups of swords. The Petersen hilt typology classifies the swords by letters in the alphabet, each letter representing a certain type of the pommel, decoration and hilt. 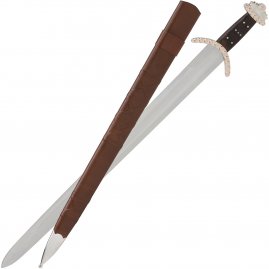 Even Vikings Had Popular Brands

We can distinguish two brands among the preserved swords. The first brand is Ulfberht, the second Ingelrii. Historians assume that these brands represent two popular blacksmith workshops. The brands kept appearing over quite a long time period, which implies that the craftsmen either passed their know-how on to their sons, or the brands were produced in some kind of “company”. The Vikings considered the swords of these two brands superior in value to all other weapons. Ulfberht was made of high-carbon steel and contained no slag inclusions. As a result, the swords were very flexible and strong. When striking against a shield or armour, the sword did not get stuck in the material, allowing its bearer to move quickly around. The strength and durability ensured that the sword could withstand many hits and break easily through an enemy’s shield. These qualities made Ulfberht a prominent and rare weapon owned by the very best. The Ingelrii brand had similar qualities but came later than Ulfberht. Most of the swords are dated back to 11th century. Nobody knows exactly what technique was used in the production of these swords, and what made them so ahead of their time. Richard Furrer was the only known smith capable of forging a similar replica of the historical Ulfberht-type sword.