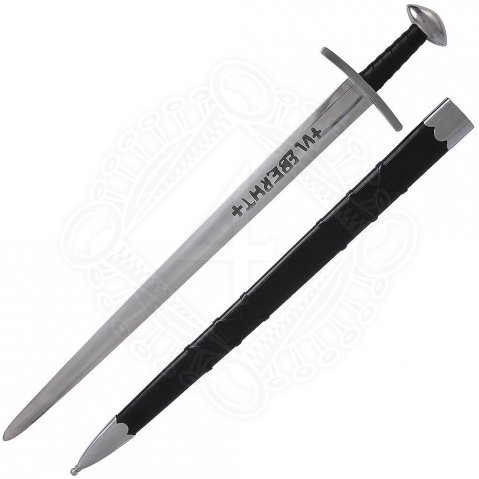 An old legend has it that a Nordic smith named Ulfberht developed the first all steel blade. This crucial development achieved near-mythical status among warriors, making this one of the most important swords in the study of medieval weapons. Several of these blades from slightly different time periods exist, some engraved in gratitude and reverence with Ulfberht's hallowed name.

Prior to the Ulfberht swords, all iron age European swords were of the pattern welded variety. Soft iron bars were welded together with strips of steel, forged into a blade shape, then a steel edge was welded onto the sword. But, the Ulfberht sword was a quantum leap in both technology and design. Not strips, but good carbon steel blades with enough carbon content to produce excellent swords. Not only was the material better, but the design of the sword was a definite improvement. The blade tapered more sharply to the point than did previous blades. This put the balance of the sword closer to the hand, making a sword that was faster on both the stroke and recovery than previous blades.

The Ulfberht Sword features engravings on both sides of the blade exactly as the original. The blade is unsharpened high carbon steel and beautifully balanced. The grip is wood wrapped with leather. The stout cross guard is steel, and the pommel is of the brazilnut shape that was quite popular at the time, both with Vikings and the rest of Europe. A beautiful and important sword. Delivery including a matching leather scabbard.

Even if this is a fully functional sword, it cannot be used in combat shows, historical reenactment or similar for safety reasons!

Specs can vary slightly from sword to sword.

Premium Quality, made by Windlass Steelcrafts®

Included in these categories: Medieval swords