European Plate Armour from the Renaissance to the Baroque

Learn more about the armour that protected fearless knights across different eras in history - from Renaissance to the Baroque, and find out which countries were their leading manufacturers and innovators! Armour evolved over time and, at a certain point, had to deal with the arrival of firearms on the battlefields. This article explores, among other things, how much the armour restricted movement, if it was so bad as we tend to think.

From the mid-14th century onwards, metal plates were increasingly used as an additional protection on top of the chainmail armour. Initially, the plates covered the shins and knees, later also the arms, shoulders and chest. Shortly before the Hussite Revolution, full plate armour appeared, usually complemented with a helmet with a folding visor.

Plate armour was also used by the wealthier members of the infantry (e.g., the town militia), and in the 16th and 17th centuries by the pikemen. Infantry soldiers used plate armour without the parts protecting legs, which would restrict their movement.

The importance of cavalry might have faded, but their armour continued improving. In the 15th century, the evolution of plate armour culminated in the iconic suit of armour, made of polished steel plates, covering the warrior from head to toe. Many such armours (mostly replicas) can be seen in museums or historical castles and displays. They might give the impression that it is completely impossible to move in them, but you would be surprised!

We tend to underestimate the craftsmanship of the ancient and medieval craftsmen who passed on their skills and knowledge on to the next generations. They knew the anatomy of the human body alright. They manufactured armours that weighed between 20 and 45 kilograms, so the wearer could move relatively freely in them. Some armours were heavier (jousting armours), around 60 kg and more, but those were only used for tournaments and exhibitions. 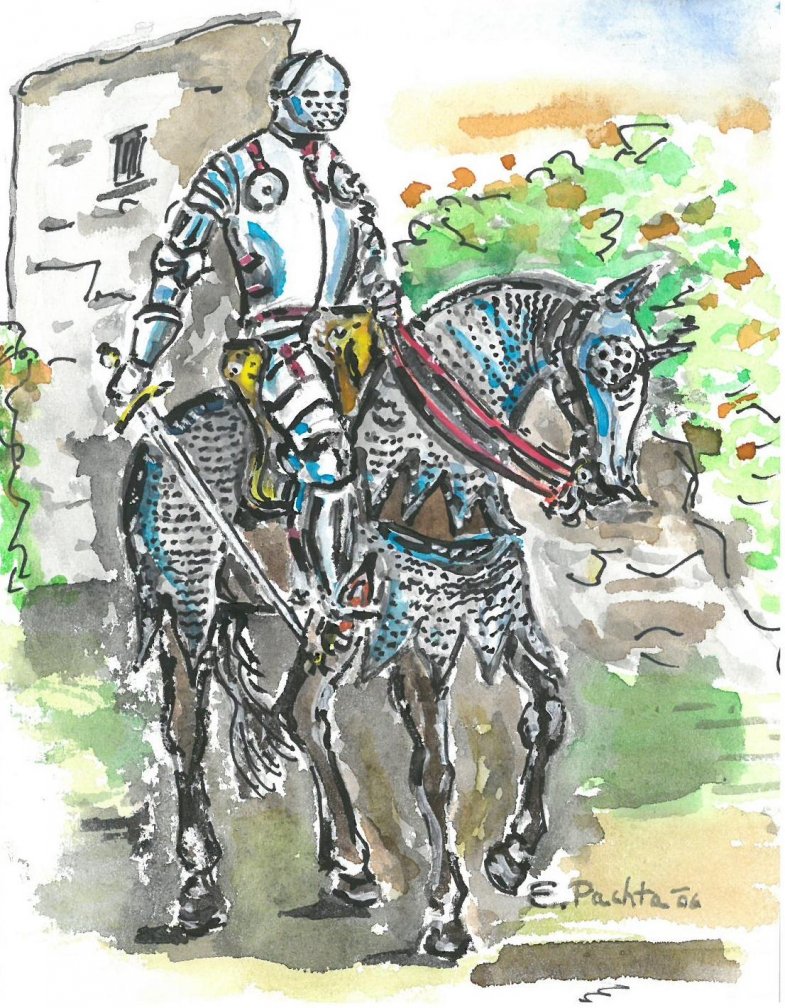 A knight in full armour from the mid-15th century. The horse is protected by chainmail armour, with a steel plate protecting its head. Gradually, a full plate armour for war horses (called barding or bard) evolved, but it began to disappear again towards the end of the 16th century.
Original watercolour: Edgar Pachta

Towards the end of the Middle Ages, at the dawn of the Modern period, the institution of feudal ‘militiamen’ gradually transformed into mercenary system with a fixed set of rules and conditions. Groups of militias were organized into ‘companies’ or larger units.

Putting On a Plate Armour

By the end of the 15th century, Italian armours made in Milan were the most famous. The family of Missaglio belonged to the most prominent plate armour manufacturers. In south-western Germany, popular plate armours of the so called ‘Gothic’ type were produced.

At the beginning of the 16th century, the craft of making plate armour reached its peak. There was simply not much room for improvement left. The craftsmen, in an effort to offer even better, stronger armours without increasing the weight, came up with further innovations.

The plates received heavy fluting and decorative etching on the surface. This is how the Maximilian armour was developed. It is associated with the Holy Roman Emperor Maximilian I (1459-1519). However, this type of armour was rather expensive, and disappeared by the beginning of the 16th century.

Putting on a full plate armour before the battle was quite a challenge. A number of servants assisted in the process, and the knight usually wore a padded defensive jacket under the armour. The breastplate and the backplate were attached first, followed by a gorget around the neck, and the thigh protection was strapped to the bottom of the front plate. After this, leg armour, boots and arm protection with pauldrons were put on. A closed helmet with a visor, decorated with feathers, was put on the head. Iron gloves came at the end of the process. 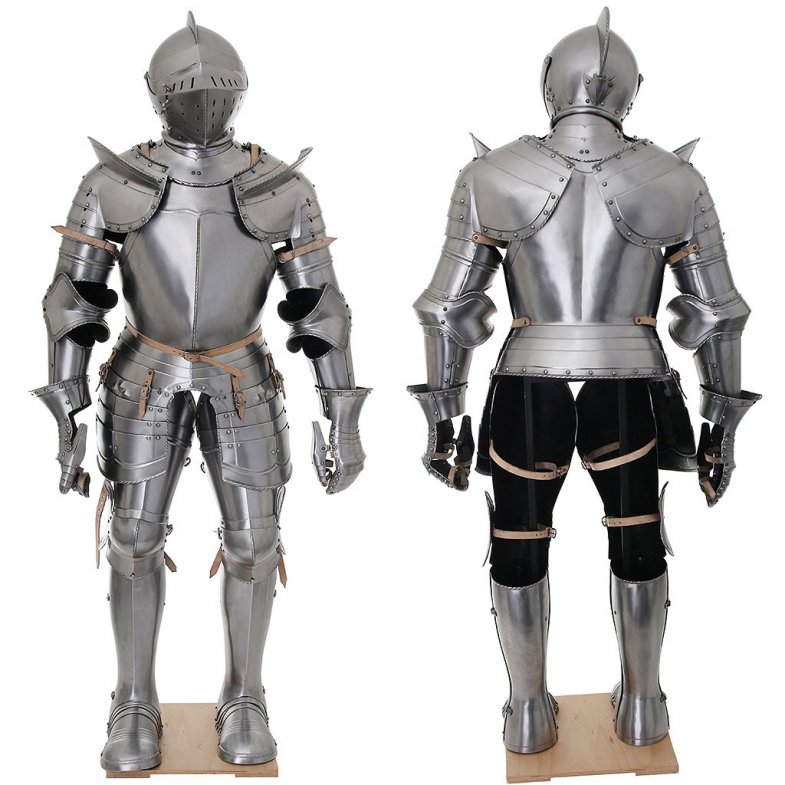 As we already mentioned, plate armour peaked on the turn of the 15th and 16th centuries. There is a story that illustrates the perfection of the plate armours manufactured in Europe back then.

In the autumn of 1529, when the Ottoman Empire besieged Vienna, a Bohemian-Austrian nobleman was captured - Kryštof Zetlic of Gersdorf (or Christoph von Gendorf). He was a strong man of large stature and excellent physical shape, he excelled in tournaments and other chivalrous pastimes.

After bravely fighting a large group of Ottoman warriors, he lost his horse and sword and was captured. The Turks admired his heroic fight as well as his shiny suit of plate armour. As Christoph lay on the ground before them, he suddenly leapt up, without aid, mounted a mule and then an unruly horse. As he was galloping around, he threw a spear into the air and caught it again. Their jaws dropped. And that was not the end. As they were trying to take off his perfect armour, they couldn’t figure out how. It took the request of Sultan Suleiman himself, who assured Christoph that he would come to no harm, that the brave soldier showed the Turks the two bolts on the side of the armour. The Ottomans held the young prisoner in high esteem and released him after the siege ended.

The Arrival of Lightweight Armour

Military service in the cavalry was the dream of every young nobleman. However, not everyone could afford expensive armour and a suitable warhorse, which is why more “lightweight” types of cavalry emerged.

German “Black Riders” (Schwarze Reiter), knights with smaller horses, gained popularity in the religious wars of the second half of the 16th century. The horsemen wore black half-armour or cuirass that only protected thighs, while the rest of the legs were protected by boots or poulaines. Thanks to their lightweight armour, the riders could use more agile horses and fought with more modern weapons - guns and arquebuses. 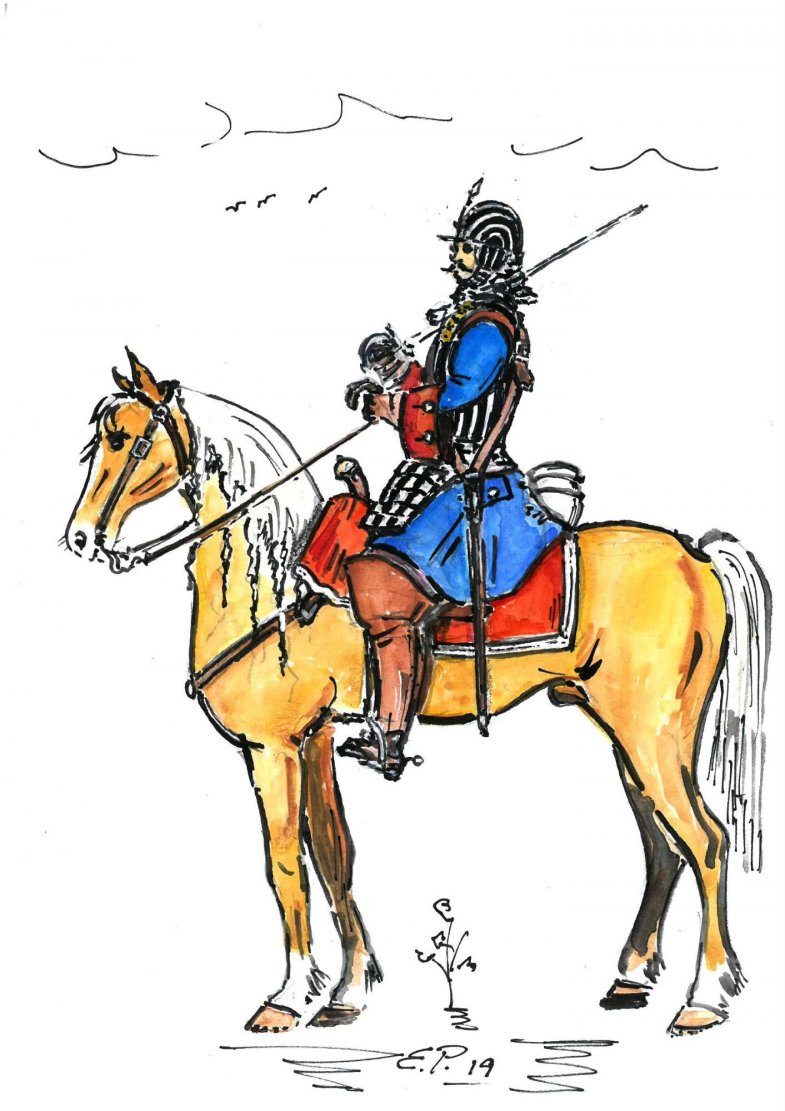 An officer of the Venetian arquebusiers, ca. 1700, wearing a helmet and a cuirass with blackened surface and decorative fluting.
Original watercolour: Edgar Pachta

Cuirassiers During the Thirty Years' War

Cuirassiers were another type of cavalry that emerged in late 16th century, and for the same reasons as the “black riders” – because other types of armour were too heavy and too expensive. They were equipped with a cuirass - a plate armour without full leg protection. The basic version of the armour weighed only around 12 kg, but with the addition of a reinforcing breastplate, the weight could go up to 42 kg. The priority at the time started to shift away from design and decoration, and more towards effective protection against the then emerging firearms. 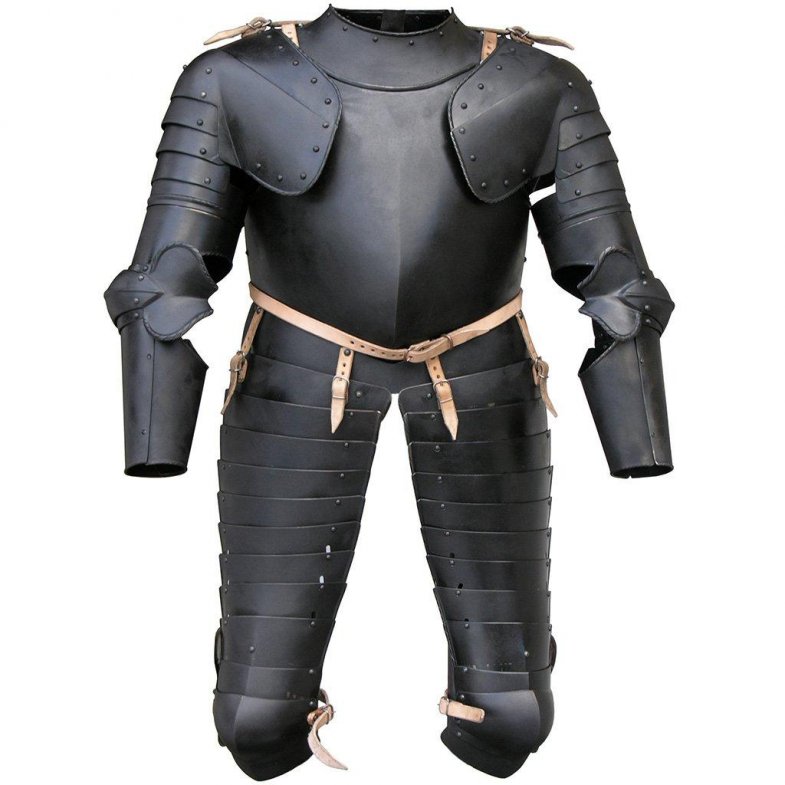 Cuirassiers kept reducing their armour, until they were left with a simple cuirass and a helmet. They became popular as heavy cavalry that kept using knight’s armour as long as until the WWI. 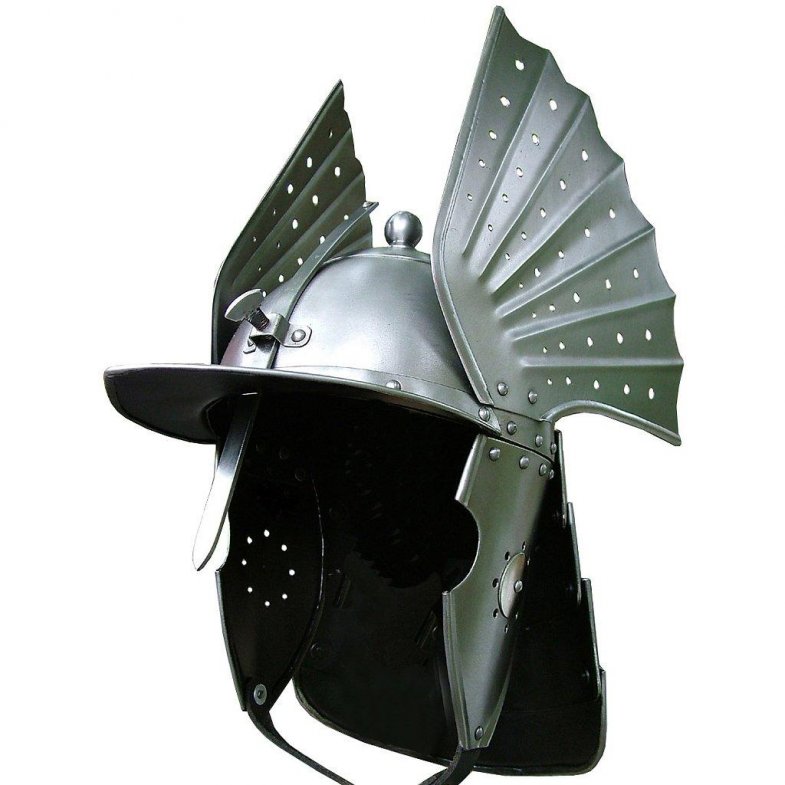 Polish Winged Hussars Szyszak Helmet. Decorative wings were added to older helmets from the beginning of the 18th century.

Characteristic plate armour was used by the Polish-Lithuanian “hussars” in the 17th and 18th century. This type of armour would, however, deserve a separate article.