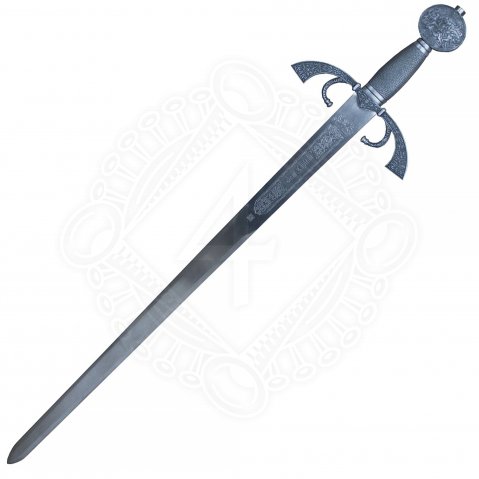 If you put down your email here, we will notify you as soon as the product Great Captain Sword embossed ornaments on the blade is in stock again.

Gonzalo Fernández de Córdoba, was a Spanish general who fought in the Conquest of Granada and the Italian Wars. He reorganized the emerging Spanish army and its tactics, and was regarded as the "father of trench warfare". He was also called "The Great Captain" (Spanish: El gran capitán). Many influential men fought under him (including Francisco Pizarro's father), and he was admired by the generation of conquistadors which followed.

De Córdoba was born at Montilla in what is now the province of Córdoba, the son of Pedro Fernández de Córdoba (Count of Aguilar) and his wife Elvira de Herrera. During the ten-year-long conquest of Granada under the Catholic monarchs, de Córdoba completed his apprenticeship under his brother Alonso, grand master of Santiago Alonso de Cárdenas and the counts of Aguilar and of Tendilla (who he called his masters). It was a war of sieges, defending castles and towns, of skirmishes and ambushes in mountain defiles.

Able to speak Berber (the language of the emirate), he was chosen as one of the officers to arrange the surrender; with the peace of 1492 he was rewarded with land in the town of Loja, near Granada. De Córdoba was an important military commander during the Italian Wars, holding command twice and earning the name "The Great Captain".

Córdoba was appointed Viceroy of Naples in 1504 and he died on 2 December 1515 at his villa near Granada from malaria at age 62.

Córdoba was a pioneer of modern warfare. As a field commander, like Napoleon three centuries later, his goal was the destruction of the enemy army. Córdoba systematically pursued defeated armies after a victory to minimize future resistance. He helped found the first modern standing army (the nearly-invincible Spanish infantry which dominated European battlefields for most of the 16th and 17th centuries).

Córdoba directed the first battle in history won by gunpowder small arms (the Battle of Cerignola). At the end of the battle, he issued a call to prayer (toque de oracion, adopted later for all Western armies); "when Córdoba saw the fields full of French bodies, he ordered the playing of three long tones and prayers for the fallen"

He left no sons, and was succeeded in his dukedoms by daughter Elvira Fernández de Córdoba. Córdoba's extensive knowledge was passed on to the next generation through the men who served under him.