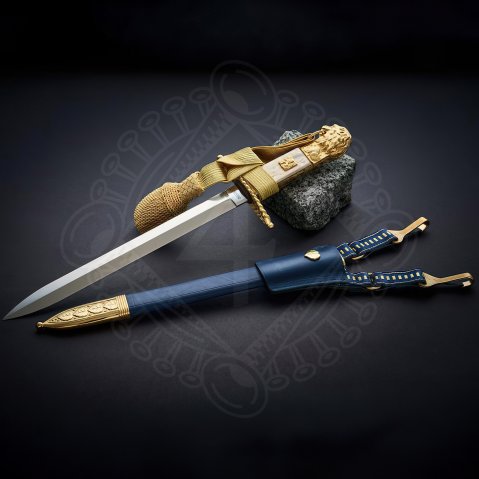 The Sword of the Czechoslovak Customs Service was worn by customs officials until 1939. It was introduced by Government Decree No. 131/1932 of July 22, 1932. During the Protectorate, it was to a small extent, after various modifications of the former First Republic coat of arms, worn by the customs service of the newly established Slovak state.

If you put down your email here, we will notify you as soon as the product Smallsword of the Czechoslovak Customs Service Model 1932 Lion is in stock again.

Description of the sword

The hilt is cast from brass, then chiseled (that is, manually adjusted with a spade) and then gilded. The lower guard is straight. From the top, it resembles the shape of an oval. The center of the part is inlaid on both sides of the mother-of-pearl, where a gilded Czechoslovak coat of arms measuring 12 x 15 mm is inserted from the front side and the handle is riveted on the other side. Only in the case of the lion are the inserted handles still attached on both sides at the top and bottom by overlapping gold plates. The upper part of the hilt is then finished on both sides with an engraving of linden leaves, above which is dominated by a beautifully elaborated lion's head with a mane and a ring in the mouth used to thread the tassel. The removable lion's head is glued with screws on some gladioli, whether in the design of a lion or a lioness. diamond-shaped with a slightly raised longitudinal central point. The tip of the blade has a gradual arching of the blade and the rickshaw is smaller with this blade than, for example, with flight cords, where the blade is similar in shape and design.
The rikasu blades are in:
original design:
Linden branches and in the circle the letter "Z" on the other side is the designation Vrkoslavice (from the manufacturer Jan Zineddr Vrkoslavice) In some cases, the sword of the Czechoslovak customs service has a ricaso without the manufacturer's designation. Hynek Hojtaš Prague is sometimes described as the manufacturer of these gladioli among some collectors. in the

limited edition number. Each piece is original.
- the blade is made of high quality stainless steel and hardened to a hardness of 56 HRC

front side hanging mandrel (hook) for attaching a hanger in the shape of a linden leaf. The lower sheath fittings are beautifully decorated on both sides with four linden leaves. Between the upper and lower fittings was glued smooth leather in a darker green shade

All visible metal parts of the sheath are in gold version .

Measures of the gladioli of the lion
400mm