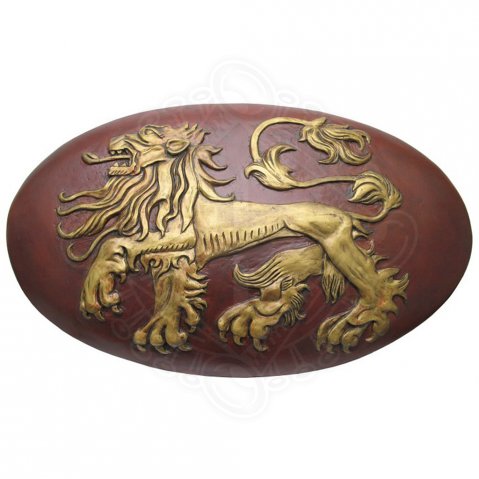 If you put down your email here, we will notify you as soon as the product Game Of Thrones - Lannister Shield is in stock again.

House Lannister of Casterly Rock is one of the oldest, most powerful and wealthiest Great Houses of Westeros. They are the Lords Paramount of the Westerlands and Wardens of the West. The Lannister dynasty ruled the Kingdom of the Rock for thousands of years before it fell to the Targaryen conquest of Westeros. Although fallen on hard times under the rule of Lord Tytos Lannister, it was restored to its former glory by his son, Lord Tywin Lannister. The arranged marriage of Tywin's daughter Cersei to King Robert Baratheon brought the family to King's Landing. Cersei's twin brother, Ser Jaime, is a knight in the Kingsguard. The secret incestuous relationship between Cersei and Jaime resulted in three children who were passed off as King Robert's legitimate children and heirs. Their eldest son Joffrey thus ascended the Iron Throne following King Robert's death as a result of a (more than dubious) hunting accident - And so began the War of the Five Kings...

This replica of the Lannister infantry shield is an officially licensed collectible meticulously recreated from the actual prop used on the HBO epic fantasy drama TV show Game of Thrones®. It has been crafted with close attention to detail and no effort was spared to accurately reproduce the authentic features found on the original piece. This large oval shield made of fiberglass and resin is embossed and painted with a lion (the sigil of House Lannister), backed with black felt and fitted with leather straps on the back.

Strictly limited to 1000 pieces, each shield is serialized and comes with a certificate of authenticity. Delivery also includes a wooden wall mount with slots that will accommodate most swords and will allow you to display up to three of your favorite swords behind the shield (the swords pictured here are NOT included in delivery!).

Please note that this shield is intended solely for display purposes as a collector's item.

- Material: fiberglass and resin with felt overlay and leather straps on the back