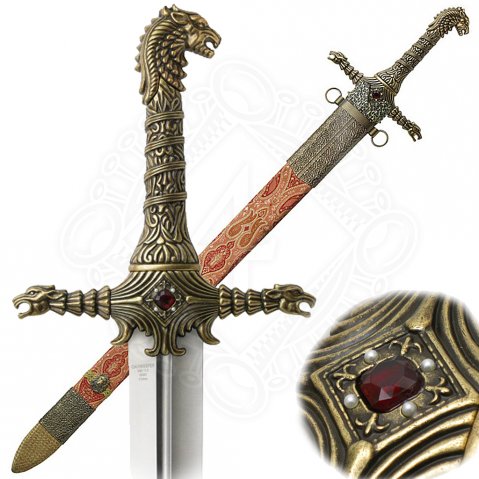 If you put down your email here, we will notify you as soon as the product Game Of Thrones - Scabbard for Oathkeeper Sword is in stock again.

This is the matching scabbard for Oathkeeper, one of the two one-handed Valyrian steel swords re-forged from Ice, the ancestral sword of the House Stark, on Lord Tywin Lannister's orders. Tywin gives it to his son Jaime, expecting that he will accept to be released from his duty as Lord Commander of the Kingsguard in order to rule over Casterly Rock as his heir. Although Jaime refuses, Tywin lets him keep the sword. Later in the series, Jaime gives it to Brienne of Tarth, with whom he shares a particular bond. It is Brienne who ultimately names it Oathkeeper.

This hand-made scabbard replica is an officially licensed collectible meticulously recreated from the actual prop used on the HBO epic fantasy drama TV show Game of Thrones®. It has been crafted with close attention to detail and no effort was spared to accurately reproduce the authentic features found on the original piece. Each scabbard comes with a matching belt and a certificate of authenticity.

The sword Oathkeeper is NOT included in the delivery and can be purchased separately, Product No. 108220112.