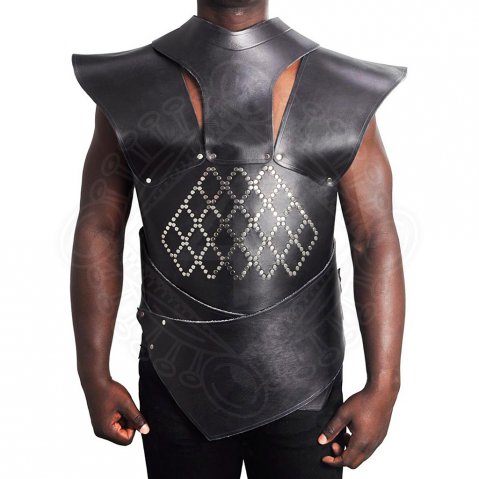 If you put down your email here, we will notify you as soon as the product Game Of Thrones - Unsullied Armor is in stock again.

Game Of Thrones - Torso Armor of the Unsullied, Leather

The Unsullied are elite warrior-eunuchs bred and raised in Astapor, a city of slave-traders located on the south-eastern shores of the Slaver's Bay on the continent Essos. These slave soldiers, trained from birth to fight, are famed for their skills on the battlefield and their reputation for utter discipline is without equal. They fight with spears and shields and are recognizable by their iconic spike helmets and their distinctive torso armors made of leather.

In the third season of the TV show, Daenerys Targaryen, a fierce opponent to slavery, travels to Astapor to buy Unsullied. She successfully negotiates with the rulers of the city, the Good Masters, to secure 8000 soldiers, only to break the deal immediately upon her purchase by ordering her freshly acquired army to slay their former masters and free all the slaves they can find. After the sacking of Astapor, Daenerys grants them their freedom and let them choose between going or joining her - as free men - on her quest to reclaim the Iron Throne of Westeros. No one leaves. The best-known Unsullied is Grey Worm, chosen Commander of Daenerys' new army, who eventually becomes one of her main advisors.

This replica of the Unsullied armor is an officially licensed collectible meticulously recreated from the actual prop used on the HBO epic fantasy drama TV show Game of Thrones®. It has been crafted with close attention to detail and no effort was spared to accurately reproduce the authentic features found on the original piece.

Strictly limited to 500 pieces, each armor comes with a certificate of authenticity.

Please note that this armor is intended solely for display purposes as a collector's item.