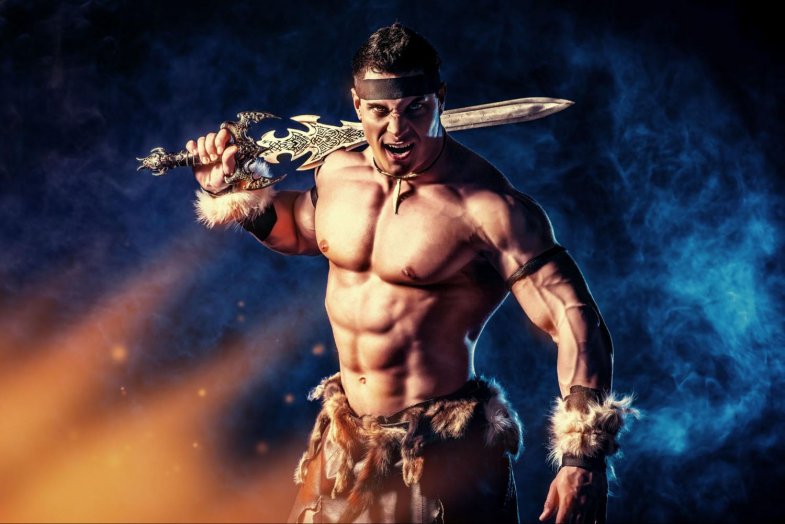 Mind-blowing heroic deeds, epic battles of thousands against thousands, and fights against hair-raising monsters These are the basic ingredients of a good fantasy story. Fantasy stories have a few things in common. First of all, the good always wins. But there is another thing. The main characters usually crush enemies with a beautiful sword in their hand. That is why we have compiled a list of the most famous fantasy swords from films, TV series and games.

Below are the eight important fantasy swords, the replica of which is an absolute must-have for any true fantasy fan!

1) Conan the Barbarian and the Atlantean sword

Let's kick off with some 80’s classics. The Atlantean sword first appeared on the screens in 1982, in the film Conan the Barbarian. Or should we say swords? Arnold Schwarzenegger uses two swords in the film. The first sword was forged by his father. The second sword, which is also the famous one, was called Atlantean. It once belonged to an ancient king and was found in his tomb.

Many admire the Atlantean sword for its extended handle, which allows it to be held more towards the front, as demonstrated by Arnold on the movie poster, and provides additional options in combat. Many others, however, consider this sword to be one of the ugliest swords in the history of Hollywood, for the very same reason. So which group do you belong to?

Let’s not leave the 80's just yet. Highlander is a fantasy action-adventure film about a war which started in the Scottish Highlands in 1536 and ends 450 years later in New York. The main protagonist, Connor MacLeod, is one of the immortals, who have been fighting each other for centuries, and at the same time, fighting together against their demonic enemy, Kurgan. McLeod carries a sword of the same name. And it is indeed a timeless piece!

3) The sword of Ragnar Lothbrok (Vikings)

Moving into the cinematography of the 21st century, while staying in the 8th century setting... The sword of the Viking king, Ragnar Lothbrok, is a treasured symbol of the Viking power. The golden handle decorated with gems, and the blade with rune inscription that translates into ”Sword of Kings”. This type of Viking sword originated in the Frankish Empire in the 8th century, and later spread to Scandinavia.

The heroes of the Assassin's Creed game series fight for freedom and just rule across continents and different historical eras. They use all kinds of weapons from pistols to daggers and swords.

In part 1, the assassin Altair gets the sword, which is the most popular sword of the whole game series. A beautifully decorated sword with an eagle's head will eventually help him succeed in a fight against the Templars. It was Templar swords that served as an inspiration for the swords in the Assassin’s Creed.

5) Valyrian Steel from Game of Thrones

Valyrian steel can be a decisive factor in battles. The steel coming from the long-gone fantasy realm in the world of Game of Thrones was destined to save Westeros. Valyrian steel had the ability to defeat the White Walkers. Swords made from Valyrian steel are so thin that they are almost invisible when looked at from the side angle. 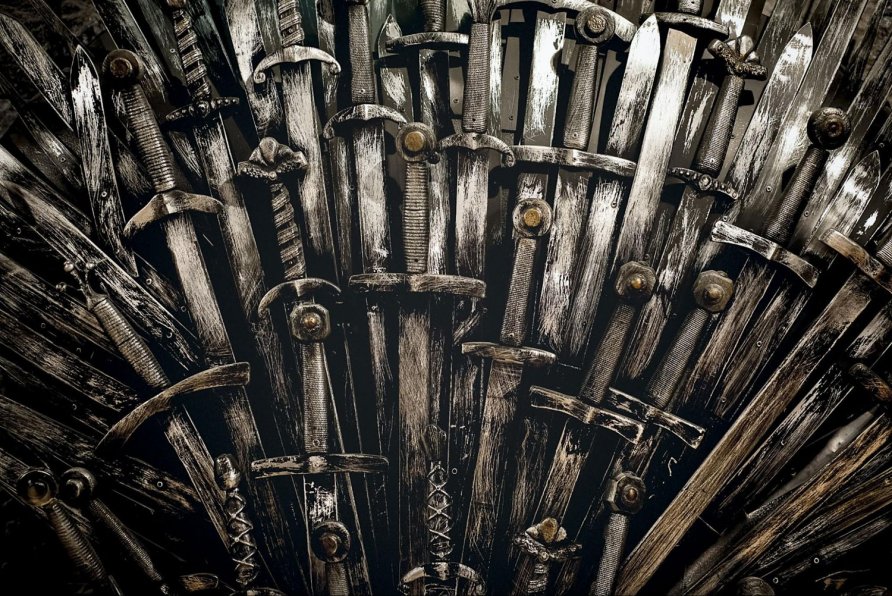 The most famous Valyrian swords include Ice, the sword of Eddard Stark. Later into the series, Tywin Lannister had the sword melted and forged into two separate swords. The swords were given to his son, Jaime Lannister, and to his grandson, Joffrey.

Jon Snow owned another sword made from this precious material. He got it from Jeor of the House Mormont. Because it was for Jon Snow, the shape of the sword pommel, which was originally a bear, was changed into a wolf´s head. With the Longclaw sword, Jon Snow killed a White Walker, demonstrating the power of Valyrian steel.

6) Weapons of The Witcher

The Witcher needed two swords. Steel Sword was for humans and Silver Sword for monsters. Geralt of Rivia, the main protagonist of the fantasy novels by Andrzej Sapkowski, the video game series and eventually the TV series on Netflix, wielded the swords in the world full of wars, monsters and specters. 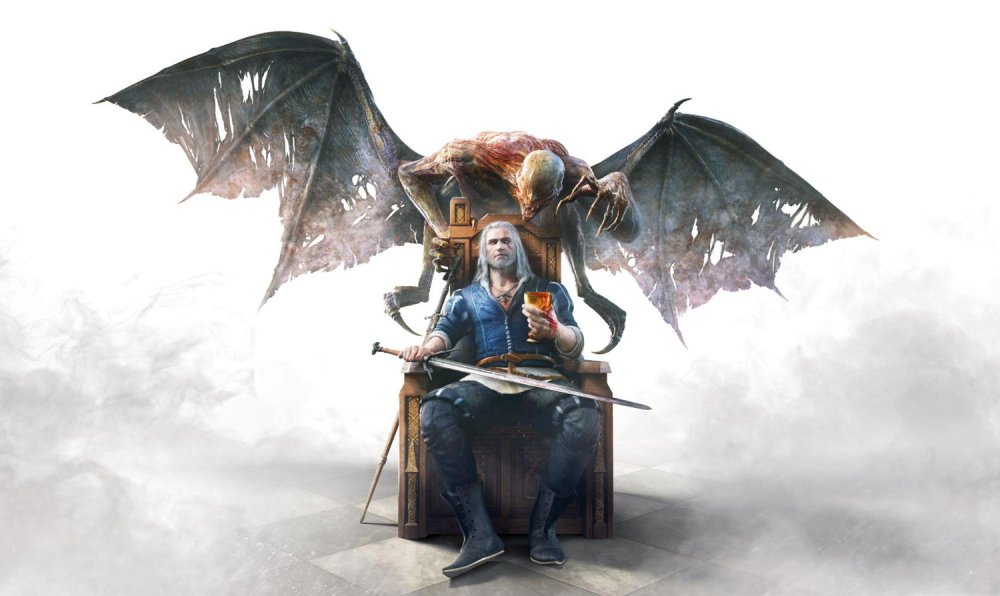 The Silver Sword of the witchers was made of meteorite ore and enhanced with runes. Aerondight, the most powerful silver sword, was given to Geralt by the Lady of the Lake.

7) The swords of Gandalf (The Hobbit)

Swords were no less important in the works of J.R.R. Tolkien, particularly The Hobbit. Gandalf found two swords in a troll cave. One of the swords was forged for the elven lord of Gondolin, the other sword he kept for himself. The second sword was rather small, so Gandalf gifted it to his little friend Bilbo Baggins. Bilbo named it Sting. Sting had a unique and incredibly useful ability - it glowed with a blue light when Orcs were close. 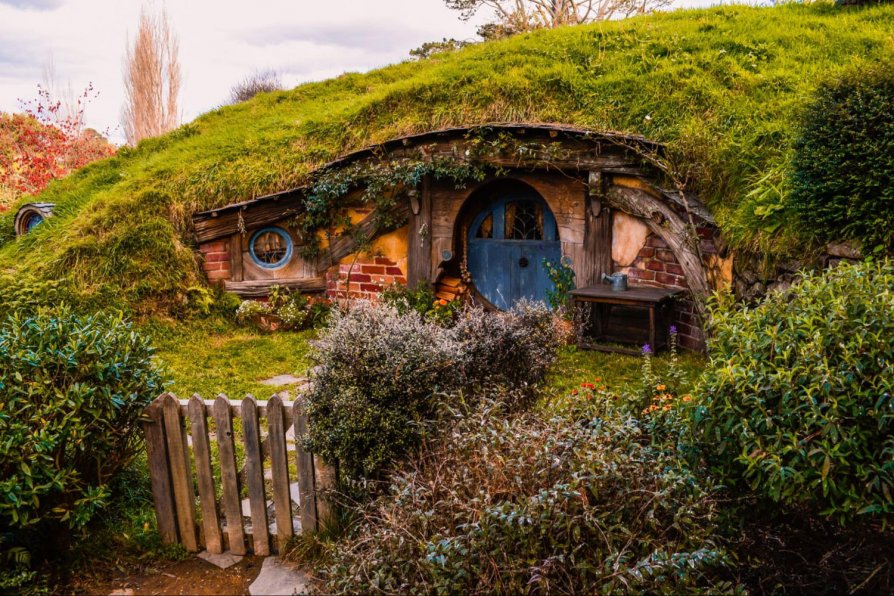 8) The Lord of the Rings

Swords played an important role in both the books and film adaptations of The Lord of the Rings. Probably the most important sword of the whole trilogy was the sword Narsil sword forged by the dwarven smith Telchar. It was used in battles by King Elendil of Gondor. In his last battle, the sword helped him defeat the mighty Sauron. At the same time, the sword broke into two pieces. Both shards were taken to Rivendell. When the time was ripe, the sword was reforged again for the legitimate heir to the throne, Aragorn. Aragorn renamed the sword to Andúril, the Flame of the West.