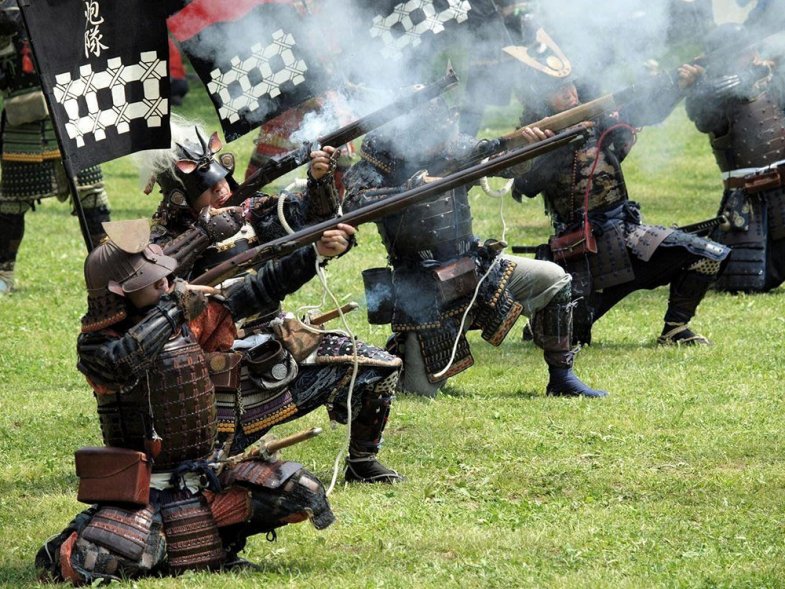 If you are interested in the legendary Samurai, their weapons and armour, we have dedicated a few articles to those topics before. But there is one more, less popular subject relating to Ancient Japanese warfare - the Japanese infantry, consisting not only of the Samurai, but for the most part, of the so-called Ashigaru, foot soldiers recruited from broad strata of the population.

He who advances is sure of salvation, but he who retreats will go to hell.

The slogan of the Ikkō-ikki fraction 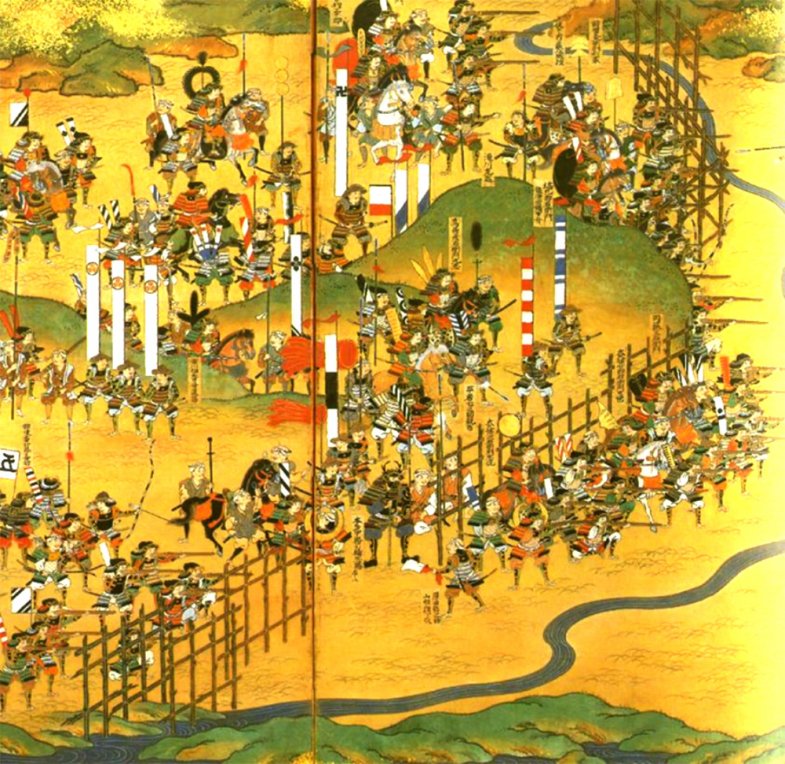 Battle of Nagashino 1575, as depicted by a Japanese artist; infantry armed with arquebuses and bows in front. Source: E. Pachta

During the period of the Nanboku-chō Wars (1336-92), a style of defensive warfare was developed in mountainous areas, defended primarily by large groups of archers. In this period, it is the first time that the term shashu no ashigaru (ashigaru shooter) was used. But a century later in the period of the Ōnin wars the term “ashigaru” completely changes its meaning - it is used to define for the first time a type of soldier with no armour, footwear or even weapons, until they get them through looting against their enemies. It was very easy for these types of men to find a daimyō, a feudal lord, in need of soldiers who would be able to fight and loot. These fierce power struggles accompanied by looting and plundering took place near the Japanese capital.

Originally, the ashigaru were recruited without pay, although they were allowed to loot after the battle or take what they needed from the conquered territories. Most armies of the feudal lords were largely composed of soldiers coming from the peasant background. The soldiers of Shikoku island were famous for keeping their lances ready at all times - they used them for harvesting rice, as well as for battles whenever they were summoned by their lord.

From about the beginning of the 15th century, Japanese armies began to grow, from a few dozen or a hundred in the 13th century to thousands and tens of thousands. The numbers of ashigaru grew. The common foot soldiers were armed with halberds, straight lances, bows and swords. They used a new type of armour called hara-ate (literally “stomach plate”). Hara-ate armour was basically just the front half of a standard Japanese cuirass, protecting only chest and abdomen. The breastplate was fitted with leather straps that criss-cross over the back, and the bottom part was attached with a waist strap. The hara-ate armour usually had a bell-like skirt of lamellar plates called kusazuri, protecting the thighs. The head of the foot soldiers was protected by a helmet, often of simple design, made of paper-mâché. 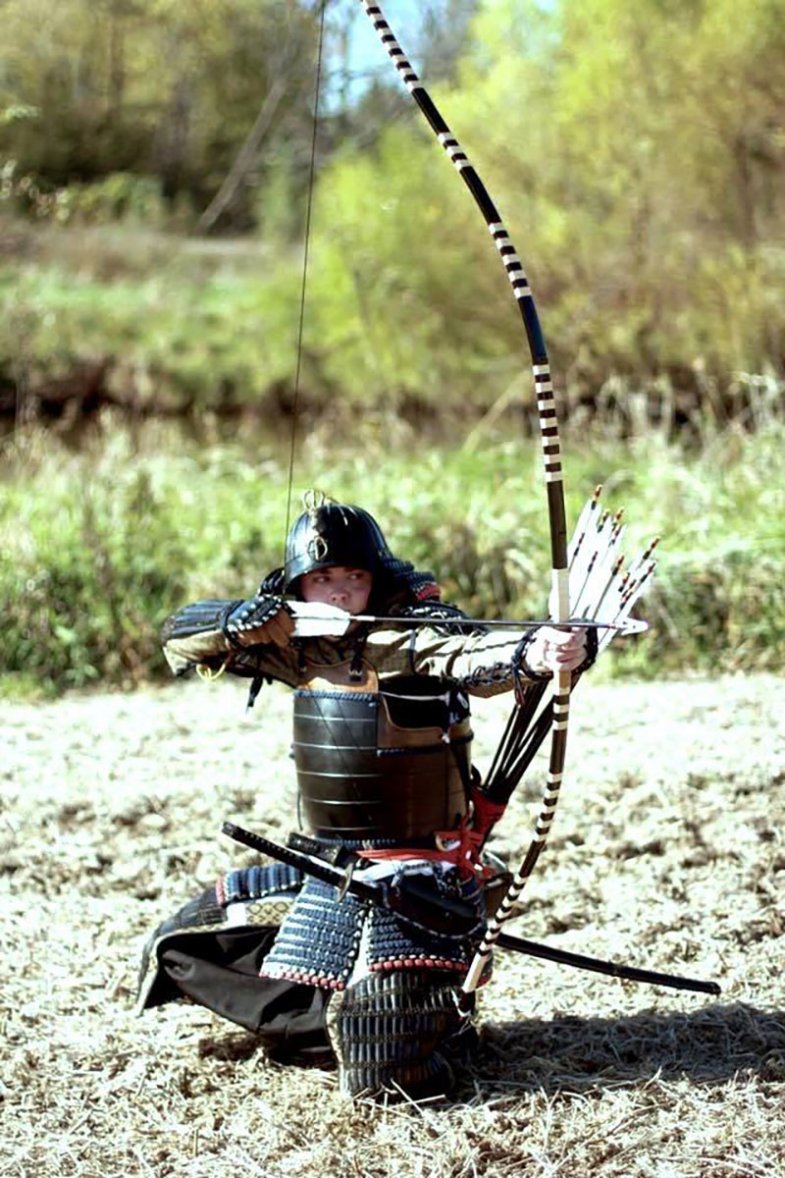 The Sengoku period (Sengoku Jidai), literally the "Warring States Period", was marked by a near-constant civil war in Japan. After the collapse of the feudal system, various warlords and clans fought for control over Japan in the power vacuum. The Warring States period was initiated by the Ōnin War in 1467, and lasted until the siege of Osaka in 1615. A considerably more stable period followed, the Edo period.

In the Ōnin War, the ashigaru infamously devastated Kyoto, reducing it to rubble. Most of them were not protected by any armour, no matter what time of the year it was. They fought both as part of organized attacks, and individually as guerillas. Because ashigaru were recruited from the “common people”, some warlords refused to hire them. Because of this, generals in command of a troop of ashigaru foot soldiers were known as Ashigaru Taisho, which was the term referring to commanding officers who commanded the ashigaru troops.

Ashigaru taisho had an uneasy task, to discipline the foot soldiers, and turn uneducated common men into reliable warriors. Oda Nobunaga (1534-1582), the great shogun of the Sengoku period, valued ashigaru as useful soldiers, and Toyotomi Hideyoshi (1536-1598), the great feudal lord, even came from the peasant background himself. 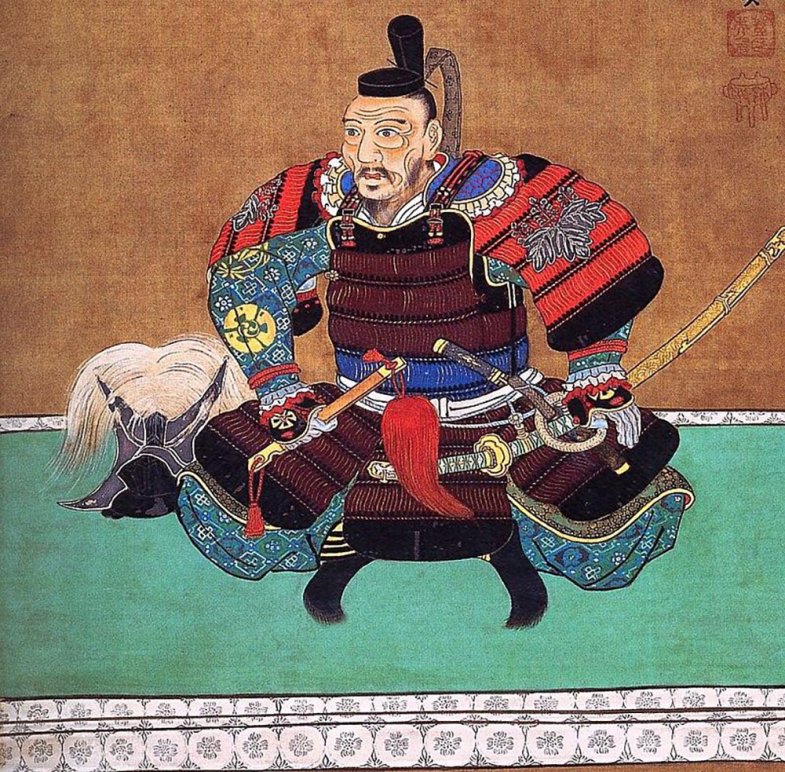 The kashira (“general”) was the highest ranked soldier in charge of an ashigaru unit (gumi) - consisting of 150-200 men divided into groups by what weapons they used. Beneath the ashigaru kashira were the ko gashira (“liutentants”), who commanded the sub-unit of archers or spearmen (30-50 men), and beneath them the “squad leaders” (teppo ko gashira) commanding the soldiers with arquebuses.There were also smaller units, tai, the equivalent of European squadrons.

The weapons of the ashigaru were originally halberds, but halberds were later replaced with straight spears, which could reach up to 8 m. They were known as Nagae yari (“long shafted spears”) and they were effective against cavalry.

In 1543, Portuguese traders brought first arquebuses to the Tanegashima island in Japan. The weapon was quickly adopted and, after 1549, the Japanese army was enriched with new military units using firearms (arquebueses) similar to the Portuguese weapons. The Japanese imitation of arquebuses was called tanegashima, just like the island where they initially appeared.The soldiers using arquebuses became a subdivision within the ashigaru troops. The ashigaru were divided into:

In some cases, the ashigaru formed a single unit using both bows and arquebuses, as both were ranged weapons. 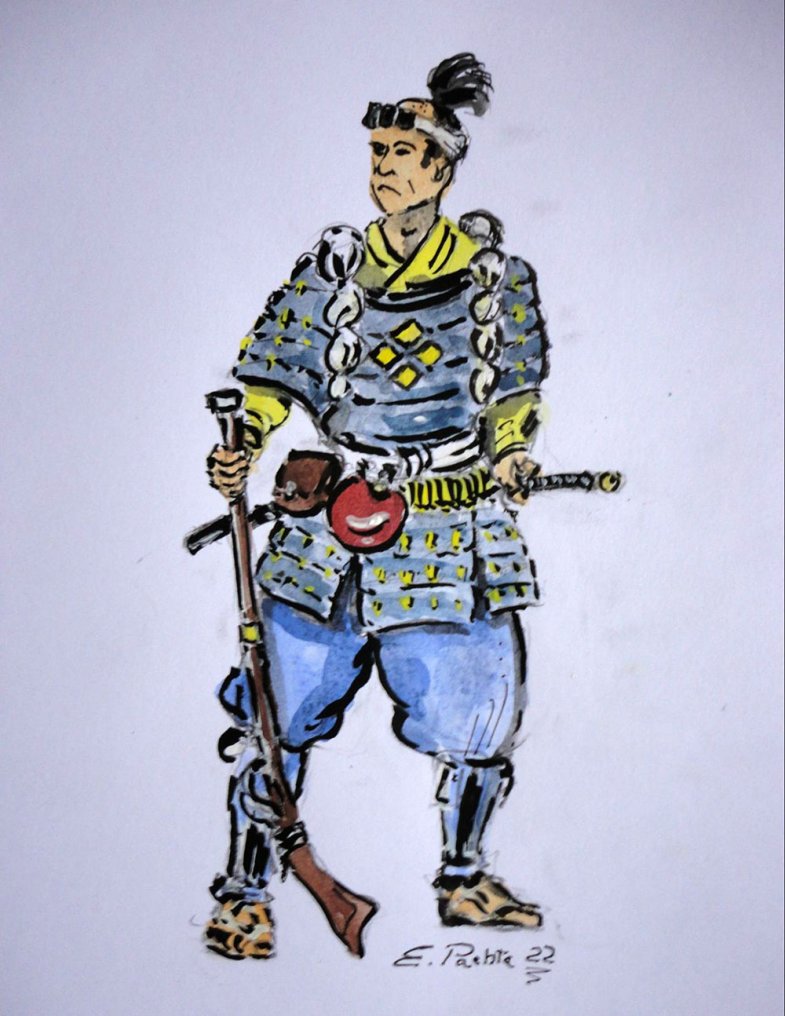 Ashigaru with an arquebus from the second half of the 16th century. Original watercolour: Edgar Pachta

One of the advantages of the arquebus ashigaru was that they did not require much training and discipline. However, using the weapon was dangerous to the soldier himself, because he had to keep a slow-burning match (piece of rope) lit at all times. To prevent the hazard of accidental ignition, the burning rope had to be kept separate from the pan with gunpowder, until the command to fire was given.  The importance and popularity of the arquebus soldiers grew. However, it was not easy to get ammo, because nitrogen sulphate (a necessary ingredient for the production of gunpowder) had to be imported to Japan.

Firearms at that time required a lot of time before they could fire. First, the soldiers had to form up in a line formation, kneeling down on one knee. Then, using a tinderbox, each soldier had to lit a match cord, which started burning. In the next step, the slow burning match cord had to be placed in the opening to the pan, but far enough from it to allow for more time. Then the soldier took a container with gunpowder and placed some of it into the barrel. Quickly afterwards he took a rod and compressed the powder in the barrel, placed a ball into the barrel and compressed again using the rod.

As soon as the arquebus was loaded, the soldier unscrewed the cover of the pan and placed gunpowder on the pan as well. Then he closed the cover and pushed the slow burning rope through the cap of the lock, which then had to be cocked. He then blew on the end of the match cord to fan the fire and placed the gun in a horizontal position. Upon command, he pulled the trigger, igniting and explosion and firing the bullet from the barrel. If an ōdzutsu (an arquebus-based hand cannon) was used, the recoil force could knock the soldier to the ground. An ashigaru firing an ōdzutsu had to aim and shoot so as to hit the rear ranks of the enemy's army. The arquebus soldiers stood in three rows, the first row waited for the command to fire, the second row reloaded, and the third row prepared to fire.

For defense, the ashigaru built palisades made from bamboo poles and wood to protect them from cavalry attacks, and the arquebsiers used large shields made of wood.

The ashigaru also used hand cannons (quite rare in battles), and firebombs called horoku, ceramic balls packed with gunpowder and ignited by a match cord.

Ashigaru were recruited in numerous ways, depending on the clan or house or region. Conscription applied to all able-bodied men between 15 and 70 years of age.

In the 16th century, a shorter version of the katana sword appeared. It was called wakizashi, and was used the samurai. Thanks to its shorter length (30-50 cm), it was suitable for indoor fights or other tight places like towns and cities. The wakizashi was great for foot soldiers. The Samurai traditionally carried both samurai swords, the short one and the long one, known together as the daishō. 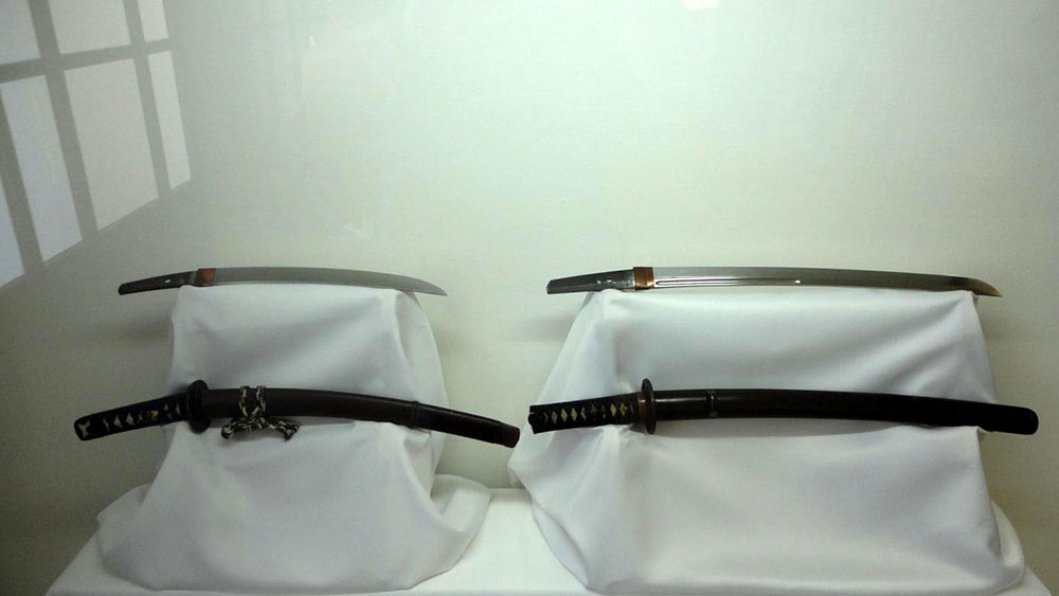 Arquebuses became characteristic weapons of the Sengoku period. There were three types of arquebuses in use: arquebuses directly imported by the Portuguese; arquebuses made in Japan, which were slightly shorter and called tanegashima (derived from the name of the island where they were made after being introduced to Japan); and large-calibre hand cannons called ōdzutsu.

The halberds used by the infantry, the naginata, were slowly replaced with yari, most commonly the type called mochi yari (“hand spear”). This 2.5 m long weapon, used by both ashigaru and the samurai, offered same advantages as the halberds, with the possibility to stab and cut. Another spear type was the nagae yari (“long shafted spear”), 5 to 6 meters in length and used by the ashigaru in a similar way to the European pikemen. They were first used by the ashigaru of Nobunaga Oda in defence against the attack by the notorious Takeda cavalry. This type of spear was used in close formations, as opposed to the mochi yari, used mainly in man-to-man combat. 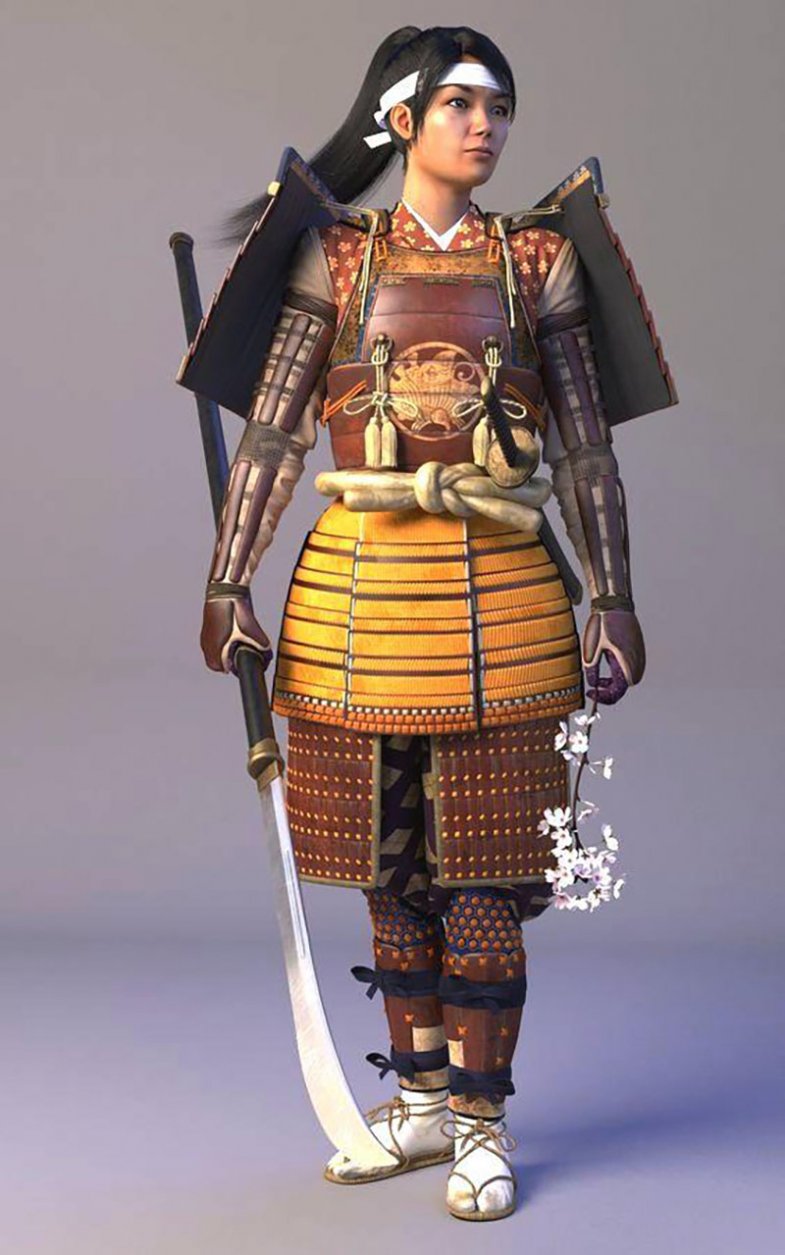