Arminius and Battle of Teutoburg Forest 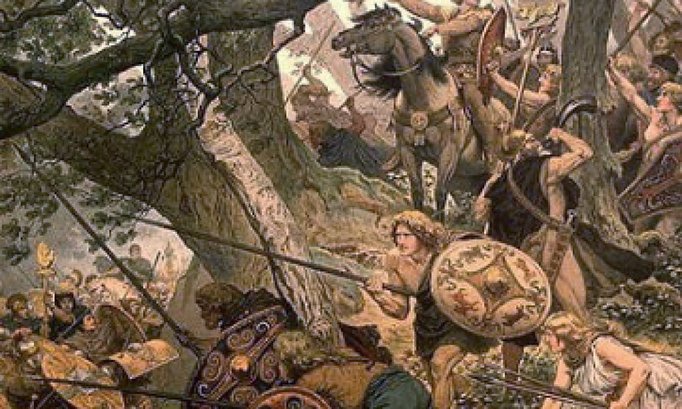 2000 years ago mighty Roman Empire controlled almost all shores of the Mediterranean Sea and was still expanding by conquering new territories in Europe. Clever tactics, organisation, discipline and technological advance lead Roman legions from victory to victory. However, in Teutoburg forest they met unexpected devastating defeat which changed the European history. Their enemies, united Germanic tribes were lead by Arminius.

Arminius was born in 17 or 16 BC. He came from Germanic tribe called Cherusci, who were living in area between nowadays German cities Hannover and Osnabrück. In 12 BC Roman legions crossed Rhine and captured territories of several tribes as far as Elbe riverbank, so Cherusci people was among them. These lands were intended to become new roman province called Germania Magna.

To secure their control over annexed provinces, Romans were taking children hostages to Rome where they raised them. When the children grew up they were sent back to their birthplaces and were named tribal chiefs. This strategy usually worked and new local leaders were loyal to the empire. On the other hand, it might fail as it later did in case of Arminius.

Arminius was captured by soldiers and raised in Rome. He gained Roman citizenship even he was born barbarian. Since that time he was known by the name Arminius (his original name was probably Hermann). He was given prime education and he learned much about roman politics and military. His abilities earned him a position of leader of supporting units during Balkan military campaign.

After 7 AD he was sent back to northern Germania where he became friend with province governor Publius Quinctilius Varus. That time the tribes were preparing for uprising against Romans.

Atmosphere before the battle

What we call now Germany used to be a country with a lot of forests inhabited by Germanic tribes. After Romans conquered Galia and Belgica (present France and Belgium) and successfully reached Rhine they invaded Germania from the west. Although Germania Magna never became official province, local people considered Romans as occupants because of their military presence. Romans built a network of military camps to take control over the lands. Local people had to pay taxes to the empire’s treasury. Romans also did political interventions to support chaos and hostility existing between the tribes.

Publius Varus’s mission was to consolidate the intended new province. However, the situation got critical when the revolts against Romans were still getting stronger and the province became unstable. It was decided to send there an army to crush the uprising with a quick effective powerful strike which not only stops it but also prevents any rebellion outburst again. For that reason 3 legions, 6 cohorts and 3 supporting alae (cavalry units) were built - about 20,000 men. Most of them had not previous combat experiences though.

Publius Varus’s plan counted with resolute suppression of all resistance by huge military intervention rather than a conflict of two armed organisations standing against each other. Arminius’s father-in-law gave him some warnings but he did not pay too much attention to them. Varus considered Arminius as his vassal and advisor devoted to the empire. Actually, Arminius had formed armed coalition of six tribes – Cherusci, Marsi, Chatti, Bructeri, Chauci and Sicambri. Their strength is unknown, but probably more than 30,000. Furthermore local tribes knew their homeland very well and fully used this knowledge in the battle. Arminius also knew much about roman military and their tactics. He could anticipate future steps of his enemies.

The year was 9 AD. The location was Teutoburg forest which is about 20 km north from present Osnabrück. The terrain there did not allow roman soldiers to create their formations. Their legendary effective strategy was suddenly no good and once the soldiers entered into the woods they were doomed. Romans were marching with difficulties through the muddy forest while Germanic partisans basically surrounded them and started to decimate them by throwing javelins. Varus realized the importance of changing the plan and tried to provoke battle outside the forest. However, both sides knew the woods provided an advantage to the tribes and their way of leading the battle. Therefore Arminius’ troops stuck where they were. They simply left the legions waiting outside. Eventually Varus decided to follow the enemy into the woods anyway.

With big difficulties and numerous casualties Romans managed to set up a fortified camp on one of the hills. They kept trying to move the battle to more open area but were not successful. The weather also seemed to be against them. It rained a lot which made some of their weapons useless. Day by day the Romans got weaker losing terribly many soldiers. This news encouraged other Germanic tribes which were neutral at the beginning to join Arminius and send new fresh soldiers to the battle.

The coalition of tribes destroyed large roman forces in humiliating defeat in a couple of days. Most of soldiers were killed in the battle and the other ones (including women and children who accompanied them) were captured and enslaved or sacrificed to the gods. Chief commanding officer Varus committed suicide. Teutoburg forest became massive cemetery for thousands of roman soldiers.

The result of the battle had significant impact. It entered the history as Clades Variana (Varian disaster) and became known as one of the greatest roman defeats. Three complete roman legions never came back from the campaign. The emperor Augustus was shocked by the news. He reacted with repetitive shouting of the famous words: “Quinctili Vare, legiones redde!” which means Quinctili Varus, return the legions!

The defeat stopped roman invasions behind the river Rhine – at least for some time. Roman army was weaken by enormous losses and was not ready to strike again. Nobody also wanted to repeat such big failure in military tactics. Border defence system called Limes Germanicus was built as a protection against the tribes. Emperor’s adoptive son (and later heir of the throne) Tiberius became the new chief commander and after some time he managed to train new units to replace the lost ones and get ready to enter Germania. He was a skilful leader and his troops won several battles over the tribes. However Romans never took full control of the lands and Germania Magna never became roman province. Augustus was convinced that Teutoburg forest was a warning that the empire reached its maximum potential and in the end of his life he advised that his successors should not extend it anymore. They actually did some decades later and were successful, but not in Germania. New emperor Tiberius stopped all efforts to annex Germania Magna and decided to leave it once for all.

Battle of Teutoburg arms and weapons

Do not also overlook our commemorative sword Arminius we offer as his incredible story memorial!