Armour of the Eastern warriors 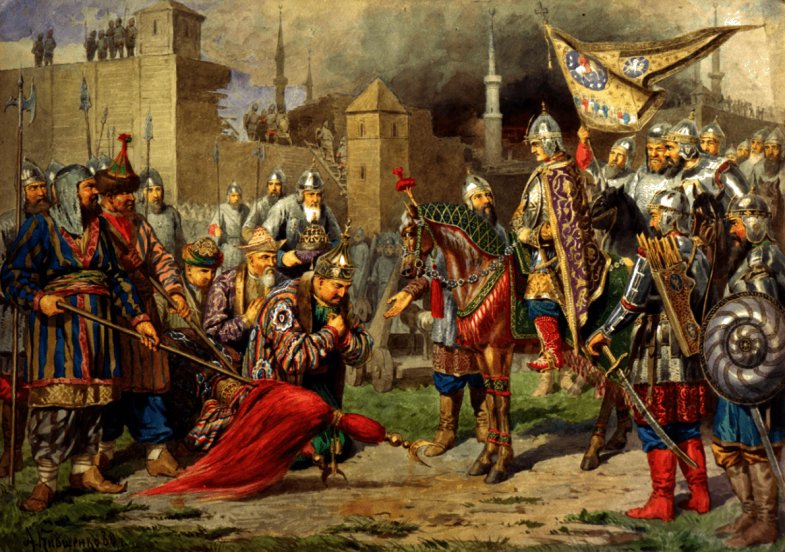 Are you curious about the types of armour used by Muslim rivals of Christian knights or Russian boyars? Do you want to know what Arab and Oriental armour looked like? Read on to find out!

Interestingly enough, even in the 14th and 15th centuries, the armour of heavy cavalrymen in both the East and the West was sufficiently standardized and very similar to each other. This striking similarity was recorded by the Castilian diplomat Rui Gonzales de Clavijo, who served as an ambassador at the court of the famous Tamerlane. When he visited the court of the ruler of Samarkand, he described at length the tents and clothing of the members of the court. Concerning the armour, he said only that it was very similar to that of the Spanish, and consisted of armour of red cloth, reinforced with metal plates.

He was referring to brigantines worn over chainmail armour, which was very popular at the time. On the other hand, the development and innovation of armour began to take its own path in different in parts of the medieval world.

In the East, laminar armour was increasingly merged with chainmail, thus combining protective function with flexibility. In the West, the iron plates hidden beneath cloth grew larger and larger until they developed into a cuirass. The same was true for helmets, which changed design so as to protect the entire head. 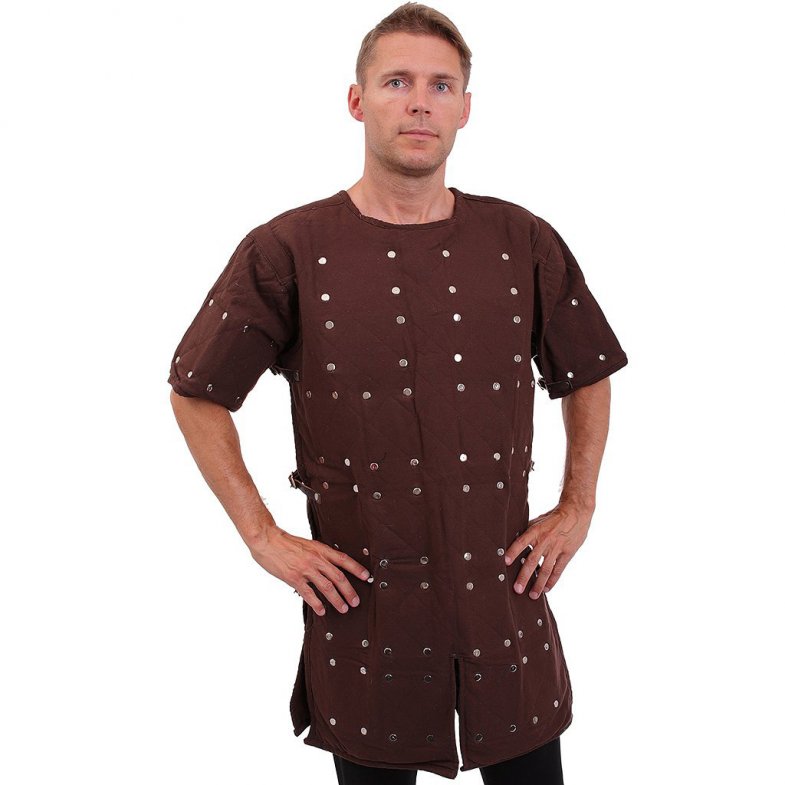 A replica of the brigantine with short sleeves, reinforced with steel plates.

The helmets of Eastern warriors also had visors based on the form of a face. From the early Middle Ages onwards, chainmail armours began to be reinforced with metal plates attached externally or attached in between the rings. According to Oriental fashion, they used to be richly decorated. Since maximum mobility was important for the Eastern warriors who shot their bows from horseback, the steel plates of their armour were limited to protecting the torso, while the arms were covered only by chainmail sleeves.

This differentiated them significantly from Western knights, who gradually adopted complex types of full plate armour, with a cut-out under the right arm (later also a supporting hook) for the lance, their primary offensive weapon. 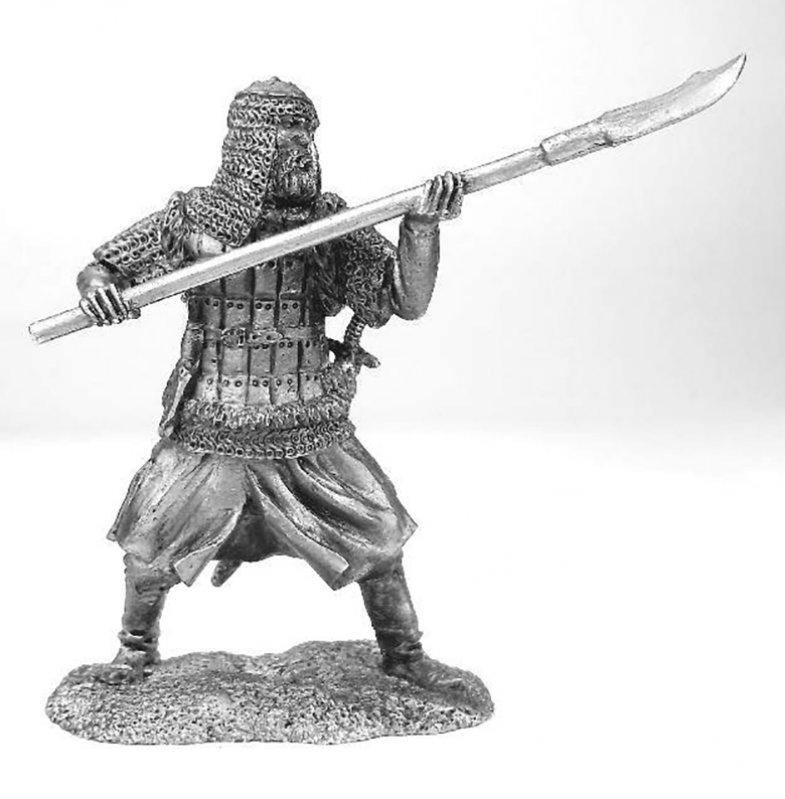 Pewter figurine of a Russian infantryman from 15. - 17th century. He is wearing a combined armour consisting of metal plates and chainmail.
Source: Edgar Pachta’s collection

Persia became the centre of production of mail-and-plate armour, which is why the different names for the types come from here. Initially, these armours were imported with their Persian names into Russia, where they were adopted. This is where the Eastern and Western influences mixed.

A brigantine could also be worn over the plate armour; protection of the chest was sometimes reinforced by a large round plate of polished steel plate worn over the brigantine or chainmail shirt. From the end of the 15th century the slates were replaced by larger plates, and the armours started using shoulder-protection, or pauldrons, plate skirts and plates reinforcing the sleeves.

In the area of the Golden Horde and subsequently in the Middle East, the first chainmail pants appeared.

In the Tartar Empire

In the 16th century, three new types of protective armour became widespread in the Tatar khanates east of the Urals:

The warriors also used metal bracers protecting the arms up to the elbows.

A Kalmyk noble from the early 18th century. He is wearing a gorget, taken from a Swedish military officer.
Original watercolour: Edgar Pachta

The head was protected by a quilted cotton or leather cap, and the neck was covered with chainmail neck protection. Steel helmets were another popular type. The most popular was the misjurka (originally from Misru, i.e., Egypt), a spherical cap with chainmail protecting cheeks and the neck. Jericho capwas another widespread type of head protection - this tall conical helmet was equipped with cheekpieces and a sliding nose strip, and often a lamellar nape of the neck.

Only members of the Tatar aristocracy could afford a complete set. The protective armour and helmets described above were used by the Kalmyks, vassals of the Moscow tsars, who formed a significant part of the Russian cavalry. The Nogais, on the other hand, despised protective armour and preferred offensive weapons (bows and arrows, lances, sabres, bone flails).

Now let's take a look at the cavalry armour of the Ottoman Empire, which became a dominant power influencing events throughout Europe during the 15th and 16th centuries.

The Turkish helmet Kulah gradually transformed into the Russian Shishak, which was adopted by warriors of almost all nations of Eastern and South-eastern Europe. Another piece of armour that proved very useful was the metal elban bracer protecting the entire forearm of the right hand (the left forearm, wrist and fingers were protected by a round-shaped shield, the kalkan). 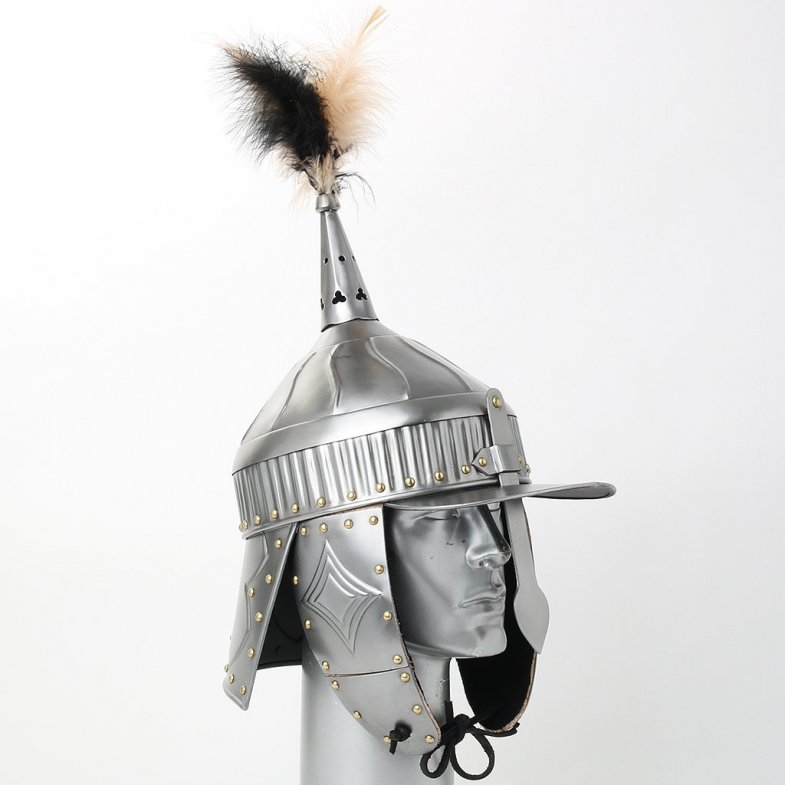 Horses of the Ottoman warriors were also protected with armour. However, the horse armour in the East, including the Turkish armour, was much lighter than the Western horse armour (barding).

A rider sitting on an armoured horse also needed leg protection. For this purpose, horsemen used chainmail leggings with boots, reinforced with steel plates. They were also used in Russia, where they were called buturlyki.

Another interesting heavy infantry unit were the Zihrli Nefer - armoured Janissary assault units who used combined armour. They can be still seen today in the Ottoman Janissary Band in Topkapi palace.

A strong opponent of the Ottoman Empire and its vassals was the Polish-Lithuanian Commonwealth. Their medium cavalry was originally called "Cossacks" (or "Five Mountains” in Lithuania), but later - in the second half of the 17th century - they were popularly called "armoured horsemen" - because they were wearing chainmail shirts as part of their armour. Before the middle of the 18th century, a uniform was prescribed for “armoured horsemen”: a crimson gown, a dark blue cap and trousers, chainmail or plate armour, sometimes dark blue cloth as the upper layer. 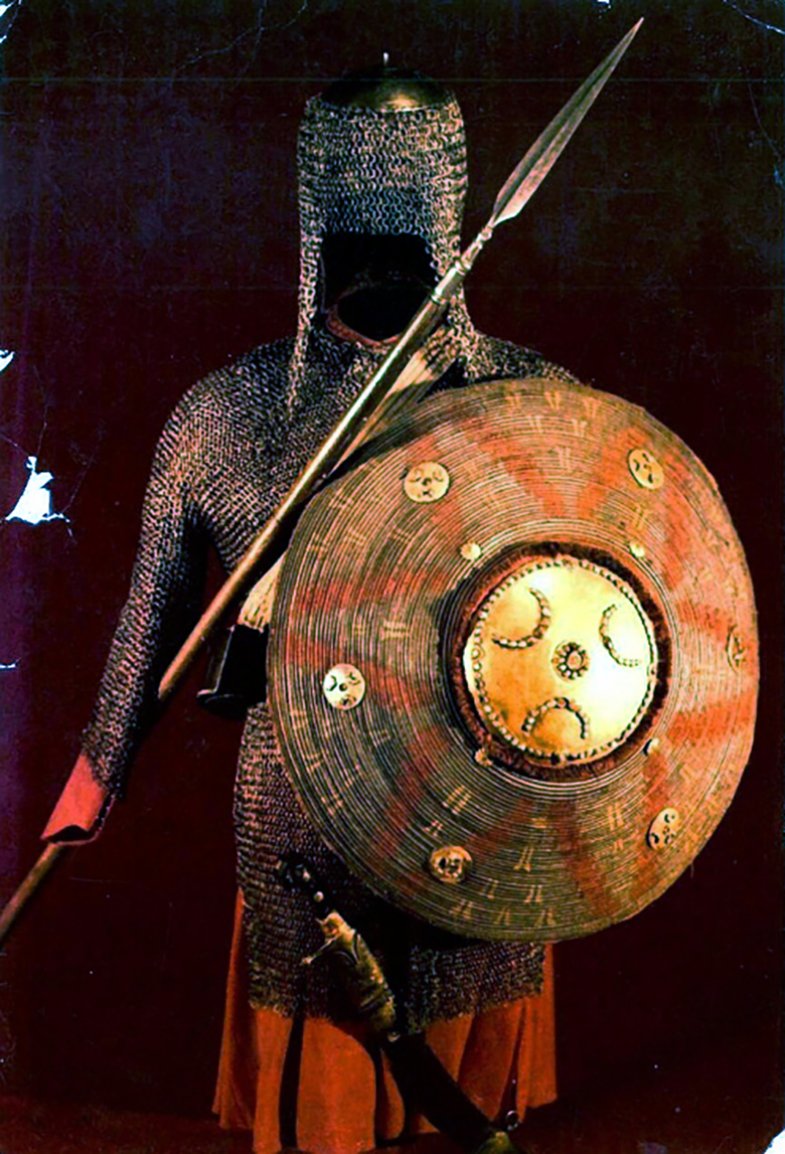 Commemorative postcard with armour of a Polish armoured horseman from the second half of the 17th century. Depicted with a sabre, spear and shield, but armoured cavalry also used oriental bows and two pistols.
Source: Edgar Pachta’s collection (Muzeum Wojska Polskiego w Warszawie)