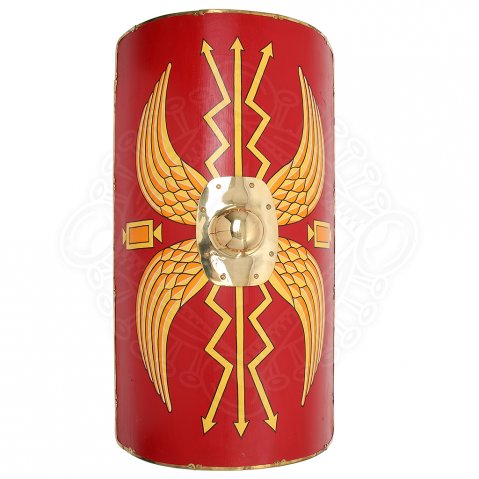 This wooden shield has a true-to-original wooden grip at the back side. It is bordered with brass in order to reduce wear and protect it against destructive effect of the enemy weapons. The shield boss (Umbo) is of brass as well.

The Scutum is painted with a classic emblem of the late Roman republic. The was worn over the left shoulder and served the warrior not only in a head-to-head battle, but as well the whole century in the so called tortoise formation.

Scutum is the Latin term for shield. Today, the word scutum is associated with the shield used by the ancient Romans. The classical scutum was used from the sixth century BC to the third century AD. During this time, the shield was constantly evolving and improving.

From the sixth to the fourth century BC, the Romans used the shield of hoplon, but called it scutum. Hoplon has been abandoned since the end of the fourth century BC. At that time, scutum was made of laminated wood, covered with cloth or leather, and was probably of Celtic origin. The shield was held by a simple handle located behind the center buckle. Scutum was much more suitable for sword fighting and javelin throwing than the Greek hoplon shield. The shield was covered with metal on all sides to prevent it from halving. If the sides of the shield were not covered with metal, the enemy soldier could halve the scutum by cutting his sword.

Already at that time, various paintings were painted on the scutum, but they did not yet have any uniformity. In the period of the late republic, the scutum basically did not change, it only took on an oval shape. It is probable that the emblems of the state or unit were already painted on the shield, and the paintings thus acquired a certain uniformity. In the early empire, the shield of the scutum, until then oval, was replaced by a rectangular piece. As with the old scut, it was made of laminated wood, covered with leather, and the edges of this shield were protected by metal. The shield also lightened, and its rectangular shape was very convenient, because it could be used to perform various heavy formations, which required a large shield.

However, the shield did not have to be the same, during the Dacian wars, the Dacian falx sword proved so strong that the armor and shields were strengthened because of it. Scutum was also used by the Praetorian Guard, which had an oval version of this shield. The shield of the scutum was a very effective protection in the early empire, as were other Roman weapons. From the end of the second century, the scutum begins to disappear (although it is still used). Scutum bears small signs of barbarization or is not used at all and is replaced by Germanic shields. These shields were oval, smaller and lighter than the scutum, but in the proper case they were not as effective and did not protect their wearer to such an extent. Since the end of the third century AD, the scutum has definitely disappeared, like other classical Roman weapons.