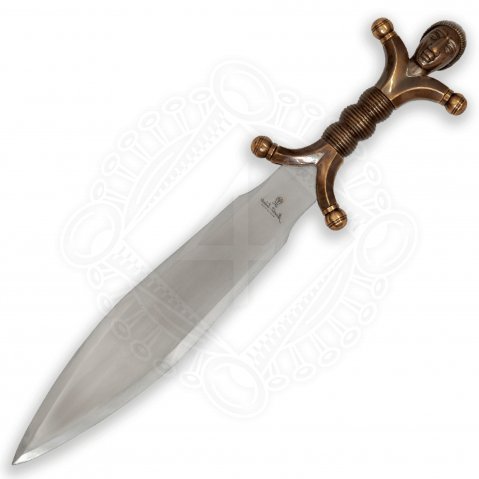 If you put down your email here, we will notify you as soon as the product Celtic Dagger North Grimston is in stock again.

High-quality Dagger of the Exclusive Collection of "Historic, Fantastic and Legend Daggers" made by MARTO®

Certificate of Origin and Quality. Made in Toledo, Spain.

A side dagger to the North Grimston Sword - this rare and striking IronAge sword was found by accident while state workers were digging pors-holes on Lord Middleton´s land near North Grimston.

In 1902 labourers uncovered the grave of a Celtic warrior at North Grimston. The dead man had been buried with a shield, two swords and a joint of pork (as The Curadmír or Champion's Portion whereby the warrior acknowledged as the bravest was given awarded the choicest cut of meat, often boar or pork. The smaller of the two swords was decorated with an anthropomorphic (man-shaped) handle. Ownership o such a rare item marks the man buried at North Grimston out to be one of the most important peole inIron Age East Yorkshire.

J.R. Mortimer – the pioneering early archaeologist and Driffield corn merchant- was called in and published the extraordinary find in his book “Forty Years Researches in British and Saxon Burial Mounds of East Yorkshire” in 1905

The diggers had uncovered the burial place of an important Iron Age warrior. As well as the famous short-sword with its bronze hilt in the shape of a human head, there was another much longer iron Sword two iron rings probably from the sword belt and the fragmentary remains of a shield in the form of pieces of bronze binding.

The North Grimston sword is one of a small number of similar weapons found across Celtic Europe wich feature a human figure forming the hilt. Other examples come from Hungary, northern Italy, Switzerland and France.

This sword can now be seen on display at Hull and East Riding Museum.

This magnificent anthropomorphic Celtic sword is also one of the best preserved.

The human form of the hilt—of a classical warrior—must have been intended to enhance the power of the owner and to bear a talismanic significance.

The face is emphatically articulated with large almond eyes, and the head with finely drawn hair.

The sword is of a type associated with the La Tène culture, named after the important Celtic site on Lake Neuchâtel in present-day Switzerland and eastern France.

Extraordinary Celtic Dagger, a high-quality dagger from the exclusive Collection of Historic, Fantastic and Legend Daggers manufactured by Marto. This unique Celtic Dagger has a unique design on the handle of Zamak and a magnificent stainless-steel blade.

The Celtic people showed special care for weapons, they were a sacred symbol, both those they carried on the battlefield and ceremonial.

The Celtic warriors wearing armor, shield, spear, javelin, and even harnesses for horses. But where artisans showed the most creativity was in the grips of the ultimate weapon: the sword. They decorated their large handles with precious stones, ivory or enamel. They adorned the swords and helmets with original human figures or animal heads.