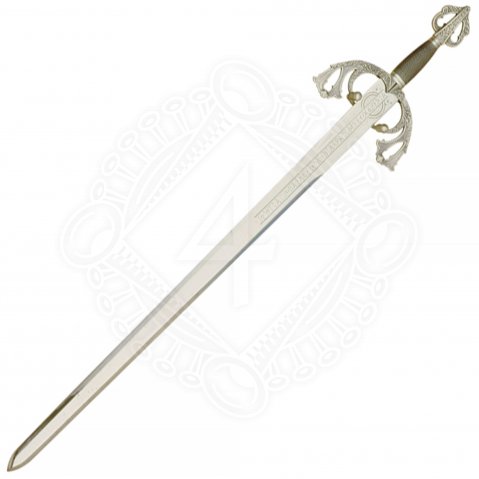 Tizona is the name of the sword carried by Rodrigo Díaz de Vivar, El Cid, which was used to fight the Moors in Spain according to the “Cantar de Mío Cid”. The name Tizón translates to burning stick, firebrand. A sword identified with Tizona is on display at the Burgos Museum, in Burgos.

There exist various Tizonas which have been attributed to El Cid. One of these figured in the treasure stock of the regent house of Castilla that was transferred by Álvaro de Luna, recovered in 1452 and placed in an inventory of the Alcázar of Segovia: "a sword called Tizona, that belonged to El Cid..." This sword was ceremonial, owing to its adornment (which reflects its Castillian heraldry)

After the Spanish Civil War, the sword that belonged to the Marquis of Falces and was later deposited in the Madrid Army Museum was moved to its new site in the Alcázar of Toledo. It was finally acquired in 2007 by the Castile and León It was expected that its final destination would be the same cathedral that houses the tomb of El Cid and his wife Jimena along with other items related to El Cid.

In the heroic poem Cantar de Mio Cid, Tizona's power depends on the wielder and it frightens unworthy opponents. When the infantes of Carrión have Tizona, they underestimate the power of the Sword due to their cowardice, but when Pero Vermúdez is going to fight Ferrán González and unsheathes Tizona (given as a present from El Cid), Ferrán González yells and surrenders, cowering in terror at the sight of Tizona.