Sabres in the Napoleonic Wars 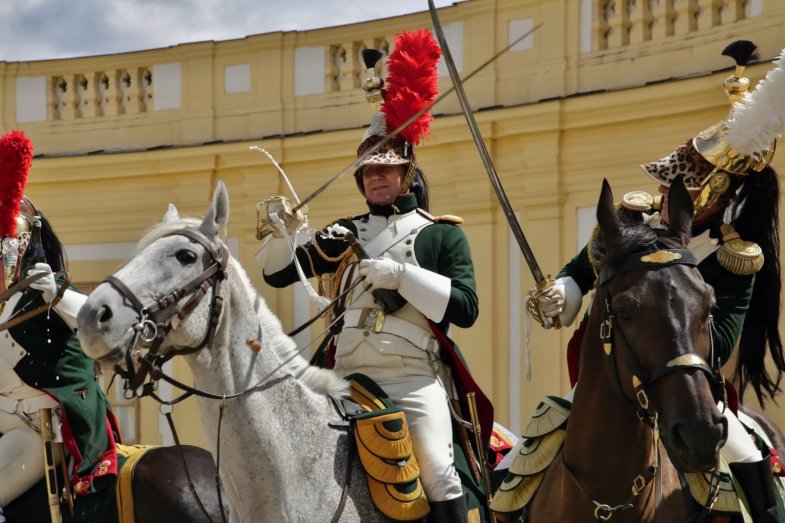 Even though the Napoleonic Wars are a long-gone history, many people still find them captivating today. That is hardly surprising. The long period of wars raging across the European continent between the end of the 18th century and 1815 have left a deep mark in the European historical consciousness. Let’s take a few steps backs in history and take a closer look at the weapons that turned men into ferocious warriors.

The Napoleonic Wars brought many innovations in the military art and tactics. But oddly enough, the gear and weapons did not change much. The soldiers in the famous Czech battles of Austerlitz (1805), Chlumec and Prestanov (1813) used essentially the same weapons as much earlier in the period of Maria Theresa. The most common cutting weapon of the soldiers was the sabre, while officers mostly used a rapier or an officer sabre.

Cavalry soldiers or cavalrymen of the Napoleonic period were armed with firearms called carbines, sometimes with a pair of pistols, but they are probably most often associated with sabres - sword-like weapons with curved blades. Sabre has its origins in the East. It was an integral part of the military gear of Hungarian hussars, uhlans (originally Polish soldiers armed with a lance), Russian Cossacks and other types of light cavalry soldiers.

Military training instruction materials for cavalry in the 17th century and later highlighted the advantages of cavalry over infantry. Mounted soldiers (cavalry) were required to be proficient in firing a pistol, and have the right position in the saddle, and be proficient in using a sabre correctly. Because "... a blow from higher above is far stronger and goes deeper than a blow performed while sitting deep in the saddle".

When a cavalry soldier faced a mounted enemy, the instruction for the soldier was to have the body slightly bent forward, legs locked in stirrups, and, on command, extend his arm straight out in front of him so that his fist (with thumb down) was in front of his mouth. The sabre, in line as an extension of the arm, was to be pointed at the opponent's chest. 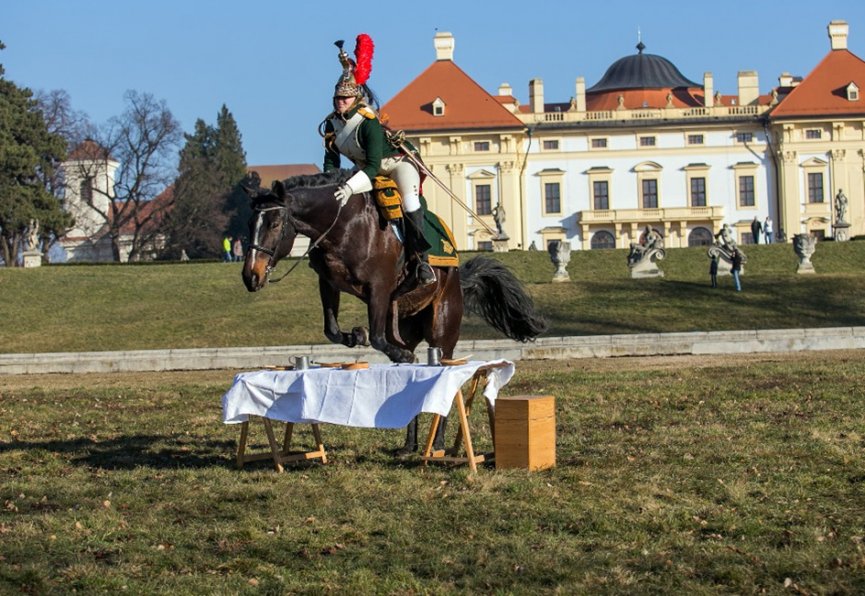 A Dragoon of the Imperial Guard in the Napoleon's army from 1810-1814, the park at Slavkov castle, Czech Republic (Acaballado Society). The long sabre was designed specifically for this military unit. Photo: Acaballado.cz

Sabres in Battle and in Combat

Before a soldier with a sabre became a dangerous killer, extensive training was required. In Poland, for example, recruits first developed their fencing skills using wooden sticks, called maces. Only when they were through with the initial training, they continued to practise for real combat situations: attacking from a horseback, using the sabre for cutting into various objects (e.g. papier-mâché Turkish heads), or using a sabre to lift a cap from the ground. 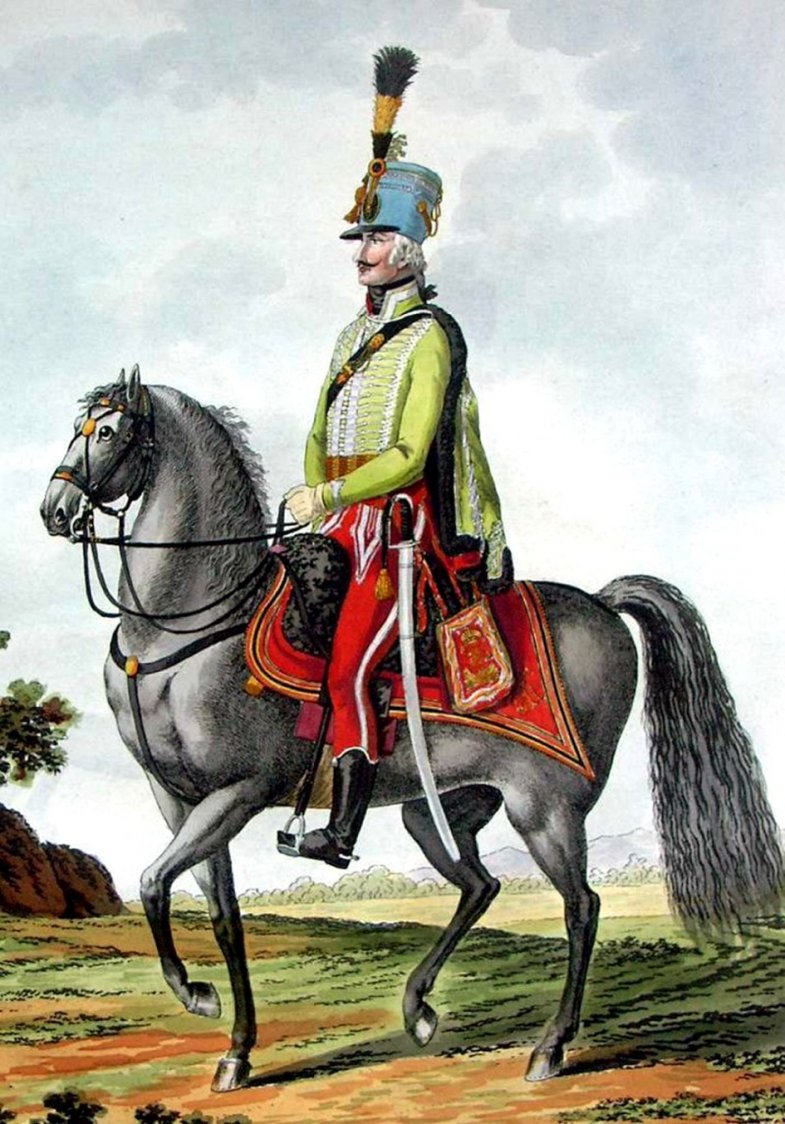 A lithograph depicting an officer of the Hungarian cavalry (Hussars) - “Insurrectio”, from 1800-1809. An Austrian Hussar sabre hanging at his hip. Image: author’s archive

Luxury-style sabres were reserved for the officers of the infantry (e.g. Austrian grenadiers), Prussian light cavalry (their sabres were called sabres with a lion head) and similar military units. This practice continued for a long time after the Napoleonic period.

When studying military units of the 18th century, one might be surprised by seeing “palash” mentioned instead of expected “sabre”. Palash is a sword-like weapon similar to sabres, but there are differences between the two. Simply explained: A sabre has a single-edged, curved blade, while a palash sword has a straight blade, usually more massive. The name is derived from the Turkish word pala, meaning straight sword. It was mainly used by heavy cavalry, called Cuirassiers.

However, in French terminology, the cuirassier's palash is also referred to as the "sabre” (Sabre de cuirassier)...

The lifestyle of nobility included duels, some of which were just trying each other's skill, while other duels were matters of life and death. Here are two extracts from memoirs of Polish cavalrymen illustrating what duels might have looked like:

"... he struck me so hard that the sabre shook in my hand; we attacked each other about ten times - nothing happened to either of us."

"... I had no choice but to strike him hard, and he got injured on the head and on the arm and started begging for mercy in the name of the Lord Most High..."

Duels were regulated by army rules as well as the warlords in the 18th and 19th centuries. But there were different approaches to duelling. While some warlords (e.g. Napoleon) tolerated them, other warlords punished the participants. 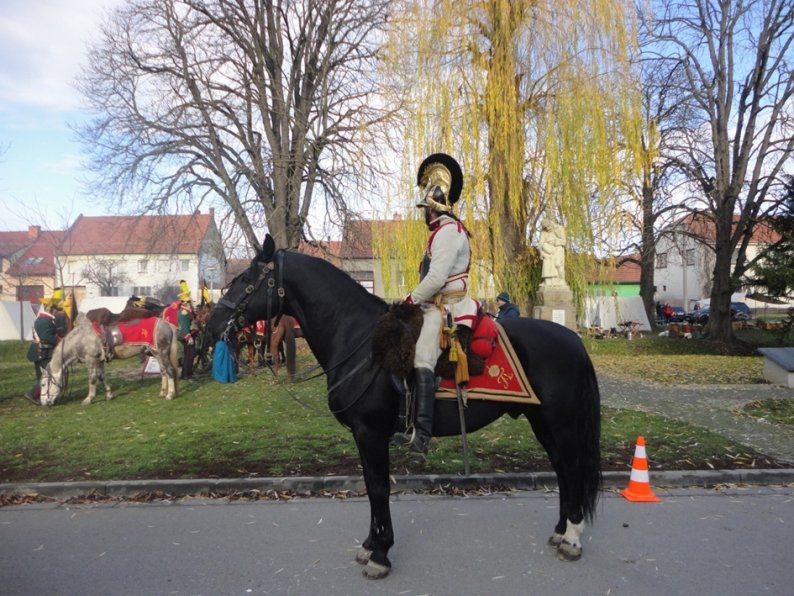 Officer of the Austrian Cuirassiers (Regiment No. 1 of Emperor Francis) ca.1805, with a cuirassier's palace M 1798. (Battle of the Three Emperors 1805-2019; village Tvarožná). Photo: Edgar Pachta

Sabres were not exclusively used by European cavalry. Napoleon's Guard had ethnically diverse military units. Most notably, the Mamluks. The Mamluks were the reminder of Bonaparte's campaign in Egypt (1798-1801). They were oriental cavalrymen riding Arabian horses, who participated in the Battle of the Three Emperors at Austerlitz. Mamluks used a sabre-like weapon of Oriental style. However, the Mameluke sword was not their only weapon. They also used a curved dagger known as jambiya or khanjar, tucked underneath their waist belt.

In times of "Egyptomania" of the time and the fighting with the Turks, oriental fashion soon found its way into European armies, where Mamluk-style sabres appeared.One fine example of this Oriental influence can be the British general officer sword 1831. 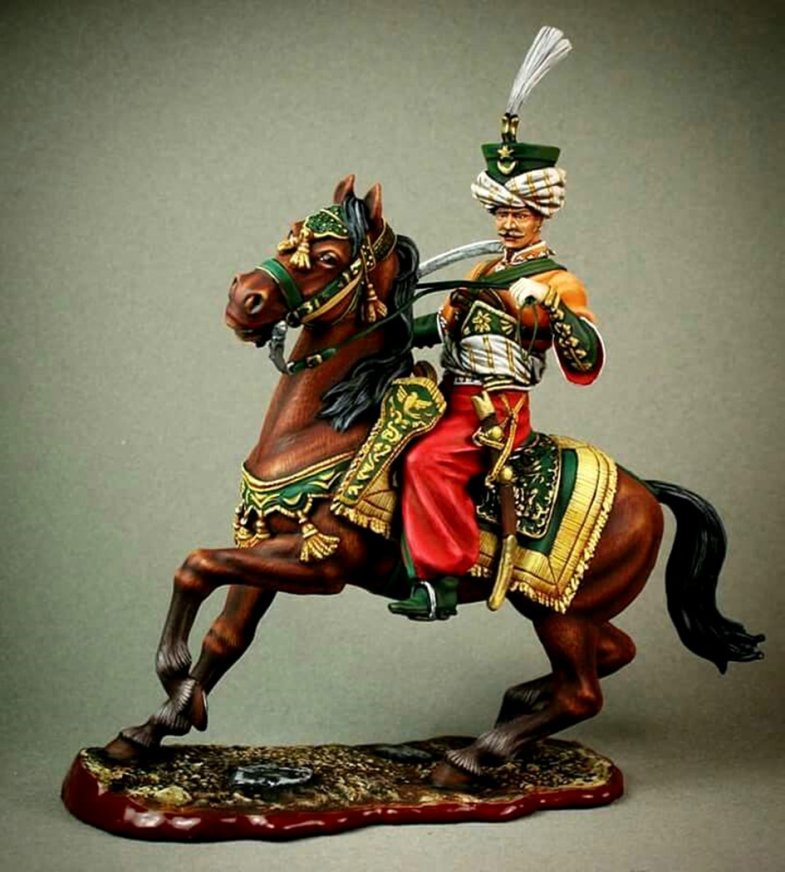 The town of Austerlitz witnessed the greatest triumph of Emperor Napoleon I. And in the years to come, Napoleon saw more and more success. There is no doubt that sharp sabres of his cavalry contributed to it. Although he was an artilleryman by profession, he said: “Cavalry is useful before, during, and after the battle.” No wonder. Because his cavalry (supplemented by Polish and German regiments) was among the best cavalries in Europe. High-quality sabres in the hands of well-trained and motivated cavalrymen certainly played a role in this.

Napoleon continued to expand his territory, until his Grande Armée found its end on the endless plains of Russia. It was Germany’s turn to rise up.

At the beginning of 1813, Russian Cossacks began to appear in Prussia and Pomerania. At about the same time, resistance groups began to emerge throughout the territory of present-day Germany, some of which united under the leadership of the Prussian Major, Ludwig von Lützow. A large proportion of Lützow's Free Corps wore black uniforms, and the cold weapon of the cavalry was the Blüchersäbel, ("Blücher sabre"), a sabre with a stirrup-shaped hilt.

The sabre is named after the Prussian Field Marshal, Gebhard von Blücher, who was nicknamed General Vorvärts (General Forwards) by his soldiers. That is because the old hussar was known to tirelessly drove his army against the enemy.

Simultaneously with the Eastern Europe front, there was another series of battles taking place the Iberian Peninsula. On the Iberian Peninsula, the British, Spanish and Portuguese troops had clashed in bloody battles against the French occupying forces in the difficult mountainous terrain, since 1808. British light dragoons and hussars also played their part, their main weapon being the British light cavalry sabre, 1796 - a formidable weapon in the hands of a trained and physically fit soldier. 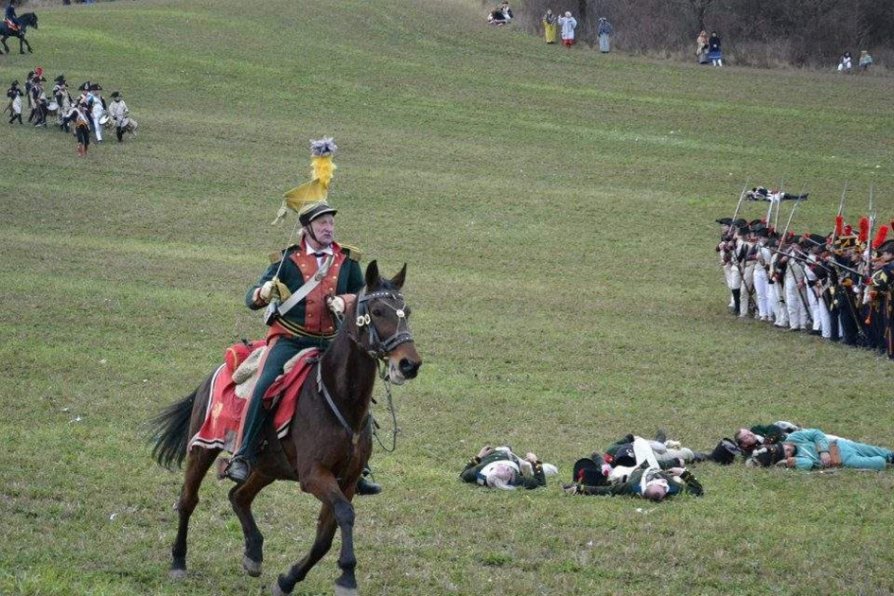 An officer of the Austrian Hulan Regiment No. 1 (featuring Vlasta Dostalik) on the Austerlitz battlefield. Hulans in the Austrian and Prussian armies at that time were usually Poles. Image: author’s archive

Horsemen of the Russian Steppe

Cossacks and steppe horsemen in their picturesque costumes made a very exotic impression on the people living in the period. Some Cossacks used beautiful sabres from Birmingham, others used a shashka, a sabre of Caucasian origin. Shashkas had a slightly curved blade suitable for the Cossack way of fighting - attacking with the sabre from the waist position. 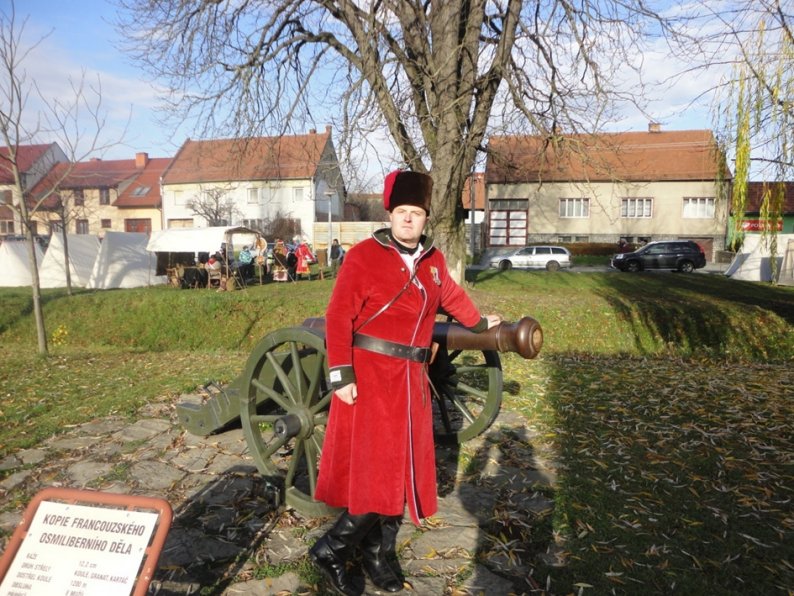 As late as the second half of the 17th century, emphasis was still placed on training infantrymen in the use of the sabre (along with the musket and lance). In the following century, sabres continued to appear in the hangers and baldrics of the soldiers. Gradually, the warfare began to transform, with more emphasis placed on firepower, and sabres became mere decorative elements. They were used by non-commissioned officers and elite grenadiers. 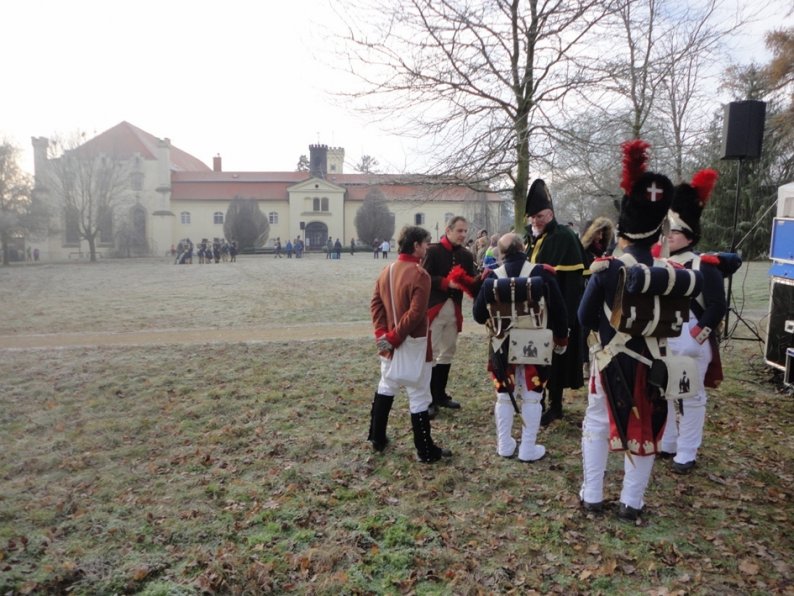 Infantry grenadiers of Napoleon's Guard, ca. 1805. Note the placement of the Briquet Sabre along with the bayonet on the hangers of the soldiers in the typical blue uniforms. (Tenkrát ve Slavkově 1805-2019, Sokolnice castle, Czech Republic). Photo: Edgar Pachta

At the turn of the 18th and 19th centuries, the short sabre with a specific "cord" type hilt was still worn by the infantry units of Prussia and Russia. The drummers, grenadiers or infantry artillerymen of Napoleon's army adopted the M AN XI sabre (i.e. the type introduced in the 11th year of the revolutionary calendar, beginning in 1793), which became known as the briquet ("light").This popular weapon was still in use long after the Napoleonic Wars ended, not only in the French army but also in other countries, including Austria, where it was used, for example, by naval personnel.

The Weapon of Nobles and Officers

A sword was since the Early modern period (under Italian and then French influence) slowly replaced by a lighter version, an épée. An épée was a companion to noblemen who brought them not only to wars (officer positions in the armies of the time were usually held by members of nobility), but they also carried them to all sorts of social occasions, from court festivities to various errands and journeys.

During the 18th century - initially in France - the sword of the nobility evolved into the luxurious Rococo-style small sword, with a small ball at the tip of the blade.

Training in the use of the small swords was also provided, using the "French school of fencing". Although fencing had already became a type of sport in the second half of the 18th century, it still remained mostly a type of combat in many countries, e.g. England. 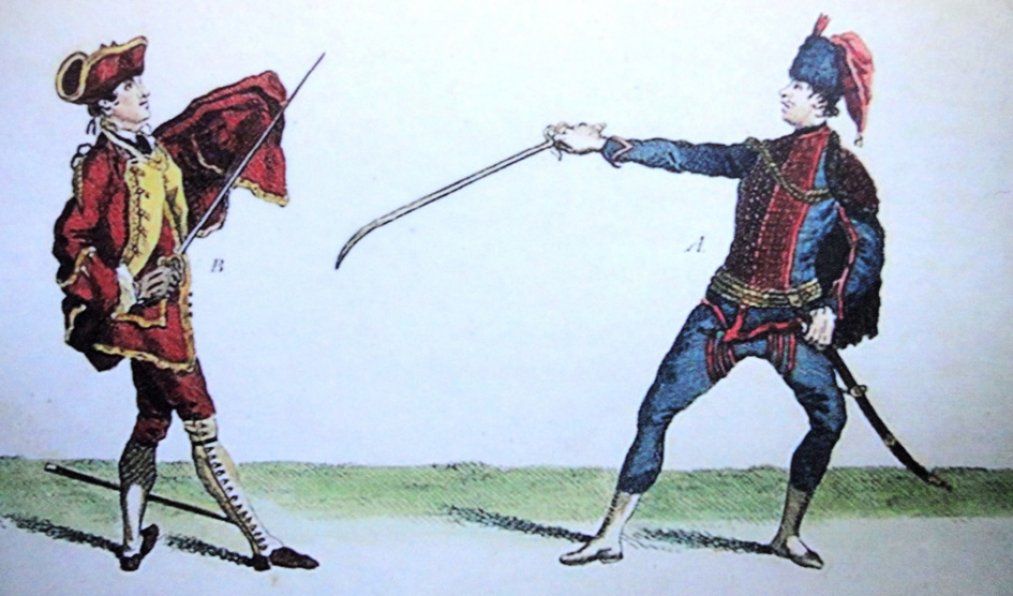 Depiction of a defensive guard with a small sword (B) against a sabre. Coloured engraving after paintings by J. G. Delino for a fencing textbook by Domenico Angelo, ca. 1760. Image: author’s archive

But these weapons fell out of favour soon after the beginning of the French Revolution (1789), because they were regarded as symbols of the “old regime”. For this reason, officers of the new revolutionary army stopped using the small sword and replaced it with the sabre (see above). It wasn’t until the Napoleonic times that the small swords or épées reappeared.