Home ArticlesInteresting facts of the past Hussite weapons 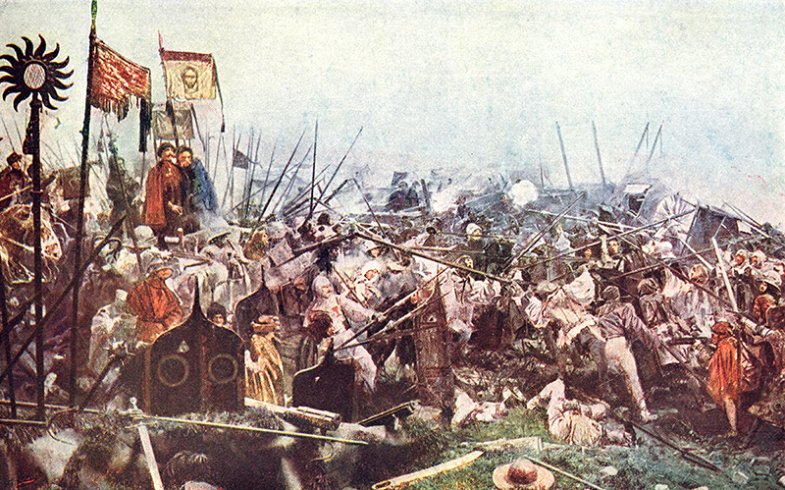 Jan Hus (John Huss) was a priest and master of philosophy from Prague University who was inspired by an English reformist John Wycliffe. Hus criticized the Catholic Church generally for abusing its power. In 1415 the Council of Constance decided to burn him to death as heretic.

This caused massive resistance against the Church among his followers (called Hussites) in Czech kingdom which escalated into the Hussite Wars.

Hus’s followers refused the pope as the head of all Christians. They said their leader could only be Jesus Christ. They did not agree with wealth owned by the Church representatives and they protested against other things such as trade with indulgence.

The Holy See was upset with events in Czech kingdom and eventually four crusades were sent against the Chalice People (other name for Hussites; chalice was also their symbol) during the wars (1419-1434). The crusaders significantly outnumbered the Hussites (in average there were about 3 times more of them) and thanks to much better financial support they could afford better training and more advanced weapons and equipment. However they lost all four crusades. On the contrary, the Hussites, some of them armoured just with modified agricultural tools won many battles because of their very effective strategy.

Famous military victories secured strong position of hussite aristocracy and helped to achieve more independence on papal establishment. In 1436 hussite religion and church services became legal next to the catholic ones. The Hussite Wars can be considered as one of the earliest part of Protestant Reformation in Europe.

The key to success

There are many contributing factors which decided the wars. One of them is that the hussite combatants had learned to profit from the weak sides of their enemy. They knew the crusaders were heavily armed. This could be turned into an advantage with a smart utilization of natural obstacles. Heavy crusaders moved and fought with much difficulties in rough or muddy terrain (e.g. on the bottom of released pond). The hussites were also masters of a moment of surprise. They did some strategic retreats so the crusaders rather carelessly advanced until they entered the place which was very hard to defence. Suddenly the hussites started their attacks and created chaos also worked well.

The chalice people remembered that good localisation of their units in the landscape was priceless. They were surrounded as much as possible by impassable terrain like rocks, ponds etc. so they were protected against unexpected attacks.

The intensive domestic military strategy became successful and later the position of hussites became strong enough to start their own offensives performed abroad called The Beautiful Rides. The soldiers were being sent to spread Jan Hus’s ideas and also to attack the enemy at his homelands as well as to get financial support from the spoils of war.

In critical moments of battle is important not to lose confidence in your allies. Hussites were real comrades-in-arms, cooperating, faithful and disciplined. They were always ready to fight for their religious freedom. On the other hand, the crusaders were not much enthusiastic and sometimes had problems with discipline or organisation which became even worse with every new fail. The hussites became so confident that they once won without any fight. Before “the battle” they were singing their song “Ktož sú boží bojovníci” (Who are the god’s fighters) loudly vigorously and together as one man. Enemy soldiers were so scared they ran away from the battlefield after they heard it!

In different parts of kingdom they used slightly different weapons. In Prague or central and eastern Bohemia they could afford more sophisticated ones but Hussites from the south had very little resources. It did not matter that much because they utilized everything which could they made a weapon of. Many of them were farmers without any military training but they easily adjusted their agricultural equipment and made deadly weapons out of it. No special curses were needed because they had been using those tools on everyday basis for years. Very common were scythes, flails with metal spikes, various chained flails, swords and axes.

The Hussites used their agricultural wagons in very innovative way. The combatants could be covered inside and still be in the same high as crusades on horses. They also used it for transportation of military material.Because the wagons were easy to move they could be effectively located to create powerful formations and to be protective walls at the same time.