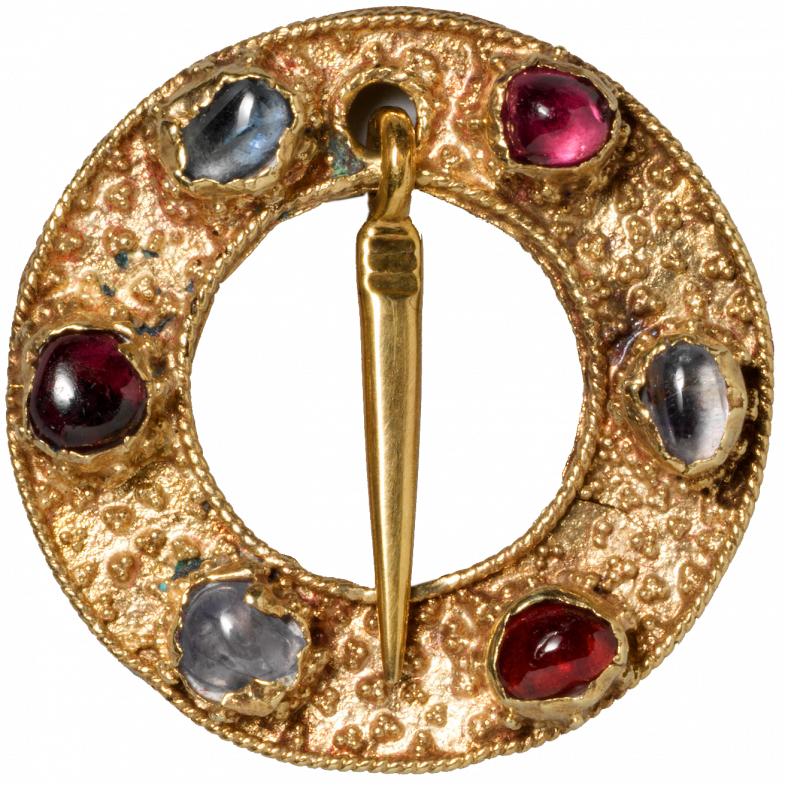 Wearing a nice piece of jewellery never went out of fashion. However, in medieval Europe the jewellery fulfilled more functions than it usually does now. For instance it could hold clothing together like an ancient safety spin. And the heads of states – how incomplete would they look without their crown and sceptre? No matter how rich or powerful they were, people felt safer against evil powers when they were armed with particular talisman and so on.

In the Middle Ages did not existed such a job as jeweller. The jewels were created by goldsmiths who were also making broad range of other golden (or silver) goods such as crosses, shrines, candlesticks, chalices, book covers, seals, various luxury utensils and, if given special rights from the monarch, they could mint coins. The goldsmiths were as other artisans voluntarily organized in the guilds. Monastic goldsmiths had their workshops right in the monasteries and the secular ones were situated in busiest streets of the cities. The royal families often had their favourite goldsmith who was generously paid for supplying them with the most precious brooches, girdles, rings, necklaces and even crown jewels.

The main raw materials processed to create jewels were certainly gold and silver usually complemented with various kinds of gems (such as rubies, sapphires, emeralds and turquoises) and pearls. The gold was much scarcer in the most of the European countries than it was in Byzantine Empire or Islamic world. In fact, most of the European gold was by far accumulated in Byzantine capital Constantinople (present Istanbul) particularly at the emperor’s court.

The situation had changed dramatically when the soldiers of the 4th crusade conquered the city in 1204 and gained probably the greatest war loot in the history of mankind. Nevertheless only very few artefacts survived till present days as medieval jewels were often sold and melted in order to make new ones. Europe had to face several “shortages” of gold while the situation with silver was much more favourable especially after opening enormously rich mines in Kutná Hora, Bohemia in 1298.

Jewellery has always been a symbol of wealth displayed by wearing it. Its decorative purpose also naturally deserves to be mentioned. People liked them as much as they do now, except men wore slightly more jewellery in the past compared to present. However, there were also other functions of these glittering accessories. For example, even today we use wedding rings. Many jewels served as insignia from which the others could immediately find out the holder’s rank or social status.

The rings used to be very popular and became quite reliable indicators. Generally, the higher status, the more rings on holder’s fingers. Furthermore, there were special rings or other jewels only for knights (distinguished for individual orders), members of guilds, judges, some clerics and of course for the royalty. Vassals wore devotional jewellery. These conventions were practical. Incoming stranger could show the insignia previously lent him by his master and thus prove he was really dispatched by that particular nobleman to perform his will.

Apart from showing richness and proving important position in society, jewels, concretely gems were kept for rather mystical reasons. It was very common believe that precious stones have certain magical properties and therefore they were embedded in amulets and other kinds of pendants. The books called Lapidariums (lapis means stone in Latin) were being written to describe virtues and powers related to each stone in details as well as its connection with astrology.

Medieval Europe witnessed rises and falls of different empires or cultures and their people wore specific kinds of jewellery. Fibulae, originally Roman brooch, were typically fastening the clothes of Barbarians who took over former Roman lands. Fibula consisted of a pin attached to decorated body by a hinge or a spring. Some of them were golden or silver but most common materials were bronze and iron. Celtic tribes who lived on British Isles wore penannular (= in a shape of uncompleted rings) brooches. Those larger brooches with different mechanism of tightening (no hinge or spring was needed) later also spread among Vikings.

The most opulent jewellery could be found in Byzantine Empire especially before the above mentioned epochal crusade. Usually it was richly decorated and outstanding in quality of work. Byzantine goldsmiths mastered preciously all kinds of delicate methods like filigree (using golden twisted wire) and granulation (using golden beads). Common motives were crosses or two peacocks standing against each other. Both had religious meaning. Trendy style of the east spread easily into new empires in the west where it with no doubt influenced Carolingian and Ottonian pieces of jewellery. Western world imported and adopted novelties, such as earrings which were originally wore just by Byzantine women.

In late Middle Ages religious motives still remained frequently present, but secular goldsmiths achieved larger significance and amount of production than monastic ones. Another interesting change came when wearing of jewellery slowly became regulated. Commoners were prohibited to possess more than determined amount of gold, silver and gems (or none at all) even when they could afford it. The new laws made this to be privilege for feudal lords, noblemen and other aristocracy.

Wealthy men of late Gothic and Renaissance eras wore impressive golden chain collars. Another jewel characteristic for those times was a ring with an opening bezel, which was used as a little reliquary, but many times actually served his owner as poison container.