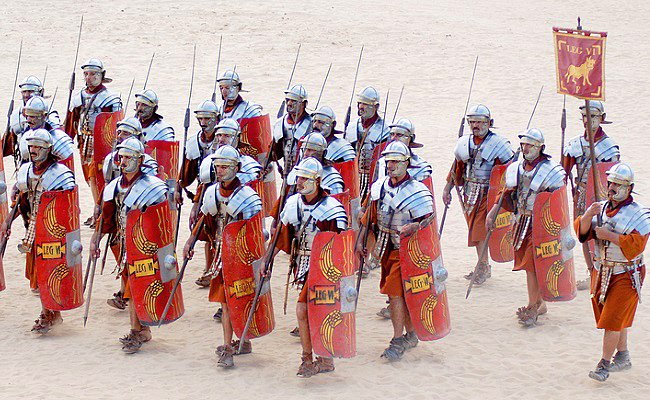 Roman soldiers of the imperial era were known for wearing protective armours which consisted of several steel segments fastened usually with leather straps and therefore they called it Lorica segmentata – segmented cuirass. Provided excellent protection this simple construction could be made fast and easily and it also enabled considerable flexibility and freedom of the user’s moves. The archaeologists found that more versions of this armour existed.

Evolution of the Lorica

Probably the oldest from Loricas is mail armour called Lorica hamata. Romans began to profit from its advantages during conquest of Hispania in 3rd century BC. They must have learned about it from their enemy, the Celts, because the armour looked practically the same as did the Celtic template. Lorica hamata was made from up to 30,000 bronze or iron rings with inner diameter 5 mm and outer 7 mm. One ring was linked with its four neighbours. There were two possible ways how to achieve that. Either all rings were originally incomplete circles (and therefore could be easily connected with any other ring) or some of them were complete (closed, can be connected with incomplete rings only). All incomplete circles were riveted to create a solid link. Production of the armour usually took about two months.

Lorica hamata was changing through the time. The oldest were long enough to cover half of the soldier’s thighs but in imperial era they reached only to his waist. Sleeves, on the other hand, were very short or even missing at the beginning and later they were getting longer. The armour was featured with double protection of the shoulders but it disappeared in 2nd century AD. Shoulders protected by two layers in a shape of “|=|” resisted better against dangerous attacks from above. The second layers of rings were attached by bronze hooks or leather straps.

Interesting fact: not all legionaries worn Lorica hamata. It was not standard equipment until the Marian military reforms of 107 BC. Before the reforms soldiers had to buy it for themselves. However it became quite popular among centurions. One of the reasons was its low maintenance.

Besides Lorica hamata the dreaded Roman legions used Lorica squamata – scale armour. Its origins are unsure and we know less about it than we know about its previously mentioned sibling. It served in the same time and most probably was the same shape including the double shoulder protection. Iron or bronze scales were 1-5 cm broad and sewn to its base. The material of the base was canvas or it might be leather but the second option has not been actually proved. To save the production time the scales was not sewed one by one, but whole strip was put together and then sewn to the base. The scales were rectangular and overlapping the neighbouring ones from all four directions which gave more flexibility of moves to the combatant.

High quality and easy to produce

In late 1st century BC in Galia there was developed a new kind of armour which we know as lorica segmentata. This name actually comes from 16th century AD and ancient Romans might call it differently. It was made from several hardened metal segments which allowed speeding the production up considerably. Adopting this technique was not only cost-effective but it also meant that the armour could be easily adjusted to fit any soldier.  Another useful feature was its compactness given by its simple construction. It was composed of four separable parts (two shoulders and two lower sections - left and right) held together by riveted leather straps or later by the hooks, so it was very practical for storing or transportation. Although it did not fully replace older kind of loricas, it became one of the symbols of roman legions.

The segments were curved metal (iron or steel) stripes overlapping each other. Vertical in upper two sections and horizontal in lower ones. The shoulders were double protected by adding a pair of extra segments. Lorica segmentata was reaching to the soldier’s waist. Through the empire era many variations with their specific little details were surely produced but unfortunately we do not know about most of them because they are either lost or just have not been discovered yet. Currently we can distinguish three types and name them after the places where they were originally found – Kalkriese (site of the Battle of Teutoburg Forrest, Germany), Corbridge (England) and Newstead (Scotland).

Kalkriese is the oldest known type dated as early as between ca. 10 BC and 45 AD. Modern replicas have the four main parts fastened with leather straps but this solution has not been fully proved because no complete Kalkries lorica was found. From the fragments we can distinguish version A and version B. They have different hinges (square for A and lobe shaped for B) and some other details, e.g. version B is decorated.

Typical features of Corbridge type are smaller lobe shaped hinges and a presence of more decoration. The two lower units were also equipped with brass eyelets or hooks for the straps to be passed through. However, a connection between upper (shoulder) and lower (body) units sometimes had a different design. Some Corbridge loricas used riveted straps same as Kalkriese type – these are version A. The other ones were held together by the hooks – version B and C. This technique was responsible for making B and C lighter than A. The whole weight was reduced to 5.5 kilograms. The only difference between version B and C was actually in positions of the eyelets for the hooks. Discoveries were dated ca. from 40 to 140 AD and Corbridge was probably the most common type of lorica segmentata at all.

Between 140 and 250 AD Romans certainly used Newstead type (among the others). Newstead was significantly more robust and the shoulders segments were thicker. It was also more simplified which made its production easier and faster again. Upper and lower sections are connected with the hooks like at Corbridge B and C, but there was an improvement in a way of connecting the two upper sections together. Metal male-through-female style loop fasteners locked by brass pegs provided more safety against the enemy who could cut the leather laces of Corbridge type. As Newstead was more solid, reliable and sturdy it also became more fixed. The absence of leather straps caused it might be less comfortable because it was not as much flexible as previous types. Anyway, this kind of lorica was still pretty common for a long time.