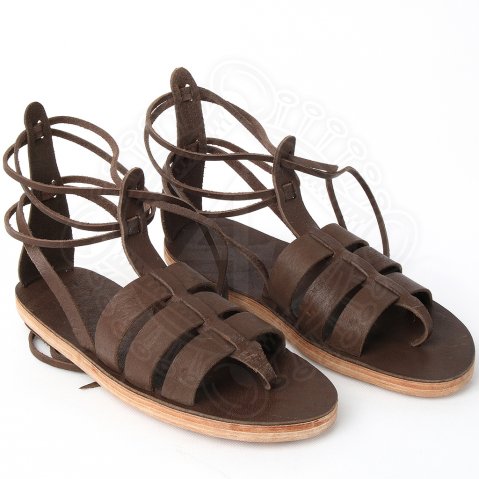 The sole on these Heavy duty Caligae is made of 5 layers and is not hammered with iron hob-nails. So you do not have to be afraid of damaging your parquet floor. The outer layer is made out of anti-slip rubber.

History of the Caligae sandals

To modern eyes the caliga resembles a sandal but was actually a marching boot. Sandals proper were not worn outside by the Romans, rather they were regarded as indoor footwear, sometimes even carried by slaves to be changed into for such thing as banquets.

Socks were not normally worn with the caliga, although in colder climates, such as Britain, woollen socks were used. It is believed Caligae were worn stuffed with sheep’s wool or material to protect the feet in cold weather. Caligae were constructed from leather and laced up the centre of the foot and onto the top of the ankle.

The shoes are treated with a balm containing beeswax. The shoes are made of genuine leather. You can treat them with various shoe care products. The balm softens the leather soft and waterproofs it. Moreover, it makes the leather darker. If you do not have the balm, you can also use oil for leather or a normal shoe polish. The shoe polish can easily tone the leather colour and cover minor imperfections (e.g. scuffed shoe tips).