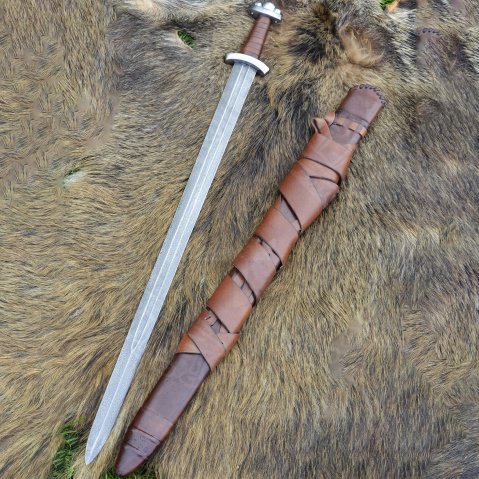 This sword is exclusively hand-crafted. The guard and the three-lobed pommel are made of heat-treated malleable cast iron. The folded Damascus steel blade has about 100 layers and is hand-riveted to the pommel. The hilt is wrapped with broad leather straps. The blade has a distinctive fuller which offers both great flexibility and a lesser weight. The edges of the blades are not sharpened.

If you put down your email here, we will notify you as soon as the product Early Viking Sword Godfred w. Scabbard, Damascus Steel Blade is in stock again.

The original of this beautiful reconstruction was once wielded by the dreaded Danish King Godfred (also called Gudfred or Gudrød). Up to his dead in 810, King Godfred lived and ruled in Hedeby (also called Haithabu), the principal Viking settlement on the Jutland Peninsula (close to the town of Schleswig).

The sword dates from the 8th century and its shape is characteristic of an early medieval Viking sword: a short guard slightly curved forward, a straight double-edged blade with a distinctive fuller, and a broad pommel with three bulges.

The sword comes with a leather-wrapped wooden scabbard and a sword belt made of cowhide.

The terms Damascus steel or pattern welded designate a compound steel forged out of two or more different types of steel. It is named after its birthplace, the Syrian city of Damascus, a former stronghold of the patterned steel production. As a common practice, a harder high carbon steel and a milder low carbon steel are repeatedly forge welded and folded together. The high carbon steel ensures a higher hardness, a better temperability and longer lasting edge retention, whereas the milder steel confers greater blade flexibility and tensile strength. This procedure, which arose in a time where steel qualities were often low and inconsistent, enables to combine the positive attributes of the various steel grades. Besides, the different shadings generated by the varying carbon content of the alternating layers engender strikingly beautiful patterns, such as the twisted motif called Torsion Damascus pattern or the Rose Damascus pattern. Undoubtedly, these unusual patterns partly explain why inherent magical properties were attributed to the Damascus steel blades of the Middle Ages. Such a damascene sword blade is for example depicted as a bloody worm or a poisonous snake in the Edda.

Included in these categories: Viking swords