Famous Swords from Games and Films

Adventure, fearless warriors, the world full of magic, supernatural phenomena and mythical monsters. These are the reasons why fantasy has been so hugely popular as a genre and why it has attracted so many fans. Every year, the Czech Republic hosts several festivals, conventions and LARP events that offer a unique opportunity to experience your favourite fantasy world, with an array of beautiful costumes and fights using accurate replicas of swords wielded by your heroes. What are the iconic swords from the most famous films, books and games?

When the “Lord of the Rings” trilogy was released, J.R.R. Tolkien certainly didn’t expect the series to lay down a foundation for modern-day fantasy. The books were later adapted into films which allowed millions of viewers to follow the breath-taking adventures of the hobbits, humans, dwarves and elves in their quest to destroy the One Ring and secure the fate of Middle-earth. The characters of the story wield several extraordinary swords. One of them, Narsil, was forged by the famed Dwarven-smith Telchar. The sword belonged to the King of Gondor called Elendil, who was slain during the final battle against Sauron, and the sword Narsil was broken into pieces. The shards were taken to Rivendell, where they rested for many years and waited for the next owner of the sword, Aragorn, the rightful heir to the throne of Gondor. The reforged sword received the name Andúril, which means the “Flame of the West”. The was not only a symbol of royal blood and heirdom, but also of hope that good will always prevail over evil. The next powerful sword was Glamdring, owned by the wizard Gandalf himself. The sword was forged for the Elven King of Gondolin but was only used in two major battles. After that, Glamdring went missing until Gandalf accidentally found it in a Troll’s cave. Another elven sword found alongside Glamdring was so small that it resembled a dagger. The wizard gave it to his friend, Bilbo Baggins, who named it Sting. Judging by its appearance, the Sting was forged by noble Elves during the First Age, and it possessed a unique magical property: the blade glowed blue and thus alerted the wielder when Orcs or goblins were nearby. 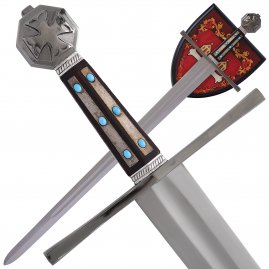 The Sword of Gryffindor

Harry Potter started as a children’s’ book. But ended up as a phenomenon captivating a huge fanbase of adult readers. The success can be measured by millions of sold copies of all 7 books as well as their 8 well-made film adaptations. Even though the world relies heavily on magic and most fights use magic wands as main weapons, the is also one legendary sword that plays an important role in the story. This unique weapon was owned by one of the founders of Hogwarts School, Godric Gryffindor. The weapon has its name after him. The Sword of Gryffindor was made by goblins and contains a depiction of the wizard Merlin with an eagle and a unicorn. The sword is not remarkably large. It is, however, imbued with great power – it can destroy objects made by dark magic and responds to “true Gryffindor” students in need.

The Silver Sword is used primarily against monsters, the Steel Sword for humans with the heart of a monster – those are the two main types of swords found in the game series The Witcher. The video games are based on novels written by Andrzej Sapkowski, the author of the world beset and threatened by wars, high politics, ambitions of the Lodge of Sorceresses and numerous monster attacks. A world that is in desperate need of a Witcher. The most important weapons used by Witchers are Silver swords made from silver and iron ore and imbued with runes. Many silver swords can be found in different places of the Witcher’s world. The Witcher Geralt receives the most powerful Silver Sword, Aerondight, from the Lady of the Lake upon completing a quest. Aerondight is meant to uphold righteousness, order and honour. A sophisticated blade imbued with runes can slay every monster that crosses the Witcher’s path. Sounds like an Excalibur legend to you? You are not far from the truth. Aerondight is a historical replica of the sword Excalibur. 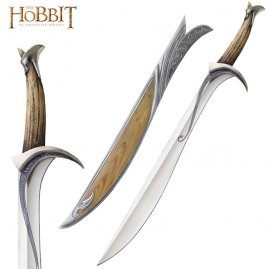 The Swords that Decide Who Sits on the Throne

Stories inspired by the Wars of the Roses expose the dark side of political plots. Such as the series of epic fantasy novels, now famously known as the Games of Thrones, by G. R. R. Martin. The film adaptations of the series have millions of fans all around the globe. Westeros, ravaged by battles over the Iron Throne, is threated my White Walkers from the North. Westeros is a home to many fantasy swords with unique properties. Longclaw is the bastard sword that Jon Snow received as a gift from his commander, Jeor Mormont, in appreciation of his heroic deeds. The sword originally had a bear pommel, but Jon had the pommel burned and remade into a wolf’s head. This powerful weapon was made of Valyrian steel, using magic and spells and extraordinary craftsman skills that no man in Westeros can boast to possess anymore. Only a handful of such swords has been preserved. Another such sword is, among others, the Ice, a Valyrian steel great sword and an heirloom of House Stark.

A secret order of assassins that fights against slavery, oppression and unjust leadership. Its heroes are known from the game series called Assassin’s creed. The plot spans across multiple continents and eras, which allows for a wide array of weapons to be used. You can kill the opponents by daggers, grenades, knives, specially modified canes, firearms, spears or maces. Sword fans will not be disappointed, either. In the first part of the game, the assassin Altair receives a beautifully decorated sword with eagle-headed pommel, that will eventually lead him to success. The Assassin’s creed Swords are also used by Templars, who uphold opposite values. The historical swords of the Templars inspired the swords used in the game. 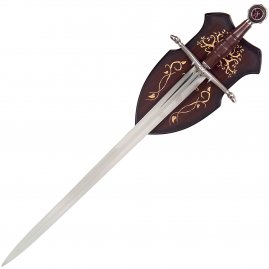