Evolution of ranged weapons: from bamboo sticks to revolver 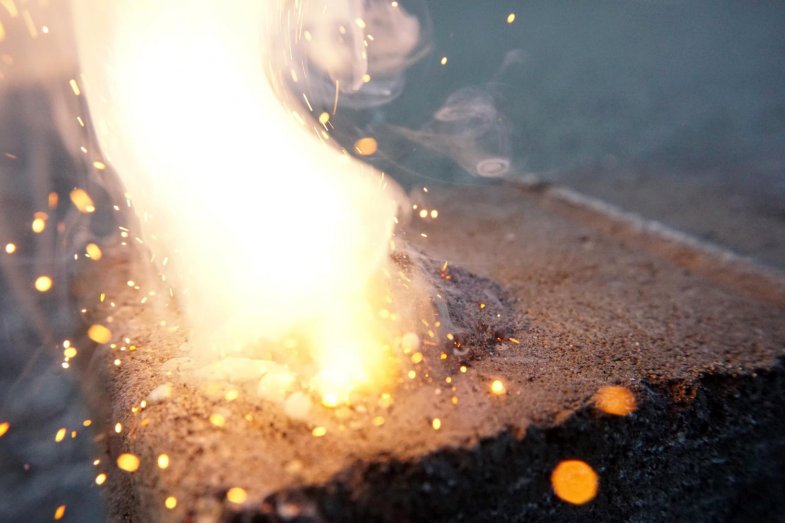 As shown in the popular Bowling for Columbine documentary, in some US states you can get an automatic firearm for free if you open a bank account. Civilian possession of weapons is a heated topic in many countries. However, let’s now look back through history to see the origin of firearms. We will see how these clumsy, inaccurate, and unreliable curiosities that used to lose battles to bows developed into lethal instruments used by military and hunters.

Gunpowder, the driving force of modern firearms, was invented in China

The appearance of ranged weapons is closely associated to the invention of gunpowder. The explosive nature of a mixture of potassium nitrate, sulphur, and charcoal was discovered by Chinese alchemists around 850 AD. Historians think that this landmark discovery came when the alchemists were looking for the elixir of life.

Initially, this black powder was used for harmless fireworks, but soon it made way to the universe of weapons. At first, it was used in cannons, then in grenades and the first primitive portable guns. These were represented by bamboo sticks filled with gunpowder and small projectiles. These arms had a minimal range and were only used in hand-to-hand combat.

Gunpowder travelled along the Silk Road to Europe

Due to trade expeditions to Asia and travellers such as Macro Polo, gunpowder and ranged weapons came to Europe in the 12th century. Europeans gradually improved the technology and came up with new types of weapons.

By early 14th century, firearms had become widespread in Europe. At first, they were equipped with a matchlock, later with a wheellock, a flintlock, and eventually with a percussion cap. Percussion cap developed mainly in America and became a predecessor of contemporary pistols. How did the individual technologies work? 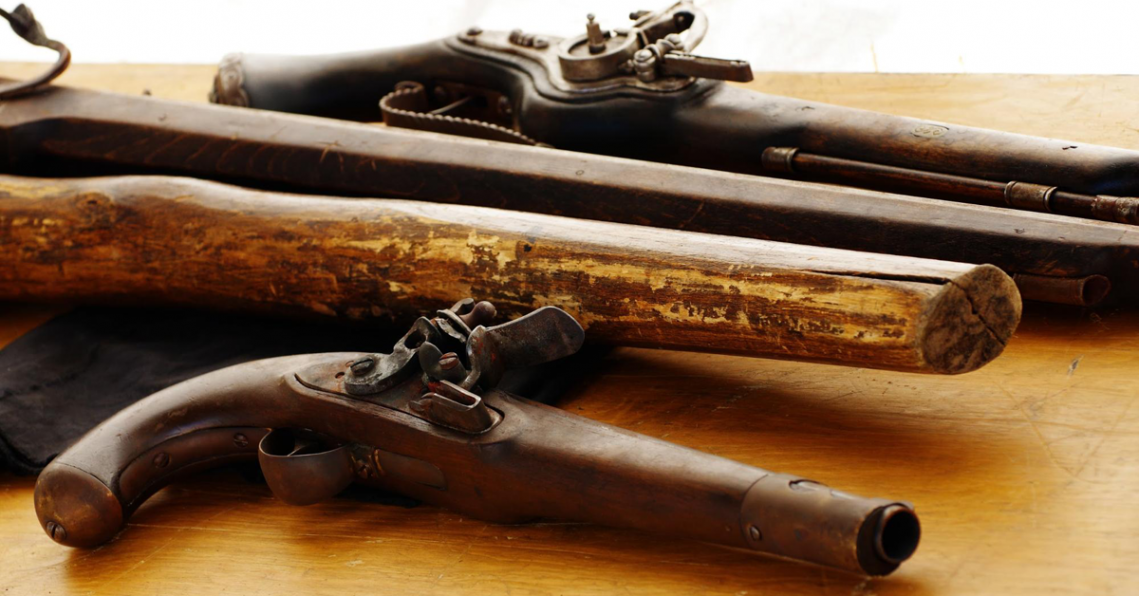 Around 1520, the first weapons with grooved barrels appeared. They were clumsy and the shooter had to use a fork rest to fire them. However, their accuracy was really not bad at the time. Soldiers and hunters could hit a target up to 200 meters away. These weapons used a matchlock ignition mechanism.

The clumsy system required a slow match permanently burning inside the gun, so there was a constant risk of self-ignition. At the same time, the slow matches would often go out when it was raining. Gunpowder would go damp and the weapons would become a useless burden.

Matchlock weapons were gradually getting smaller. Thanks to smaller size and simple fabrication that only required the most primitive equipment, this historical method of firearm production stayed popular namely in Asia up to the 19th century.

Soldiers equipped with firearms had to carry powder flasks

Historical black powder weapons had to be reloaded after every shot. This is why soldiers used to carry powder flasks along with their weapons. Some were made of cow horn to replace older leather pouches in which gunpowder could get damp and the advantage of having a firearm was gone. A powder horn with a wooden cap kept gunpowder dry and ready for shooting.

More advanced weapons used a wheellock mechanism. You can imagine it as today’s zippo lighter. It was used for muzzle-loading firearms and was invented by 18th century German craftsmen. They realized that the gunpowder could be ignited by a spark: no need for a smouldering flame.

This is why they invented a system based on a small wheel with a coarse surface, connected to the trigger by a spring. When the trigger was pulled, a piece of sparking material approached the wheel and the wheel spun. This made the necessary spark.

This smart mechanism was very costly, though, so it could not be used for equipment for an entire army. This is why wheellock weapons mostly became popular among nobility and were mainly used for hunting.

Another evolutionary step forward was made by flintlock weapons. They used a system also called the Spanish lock because in the early 16th century, it was most widely used in Spain (although it was probably invented in Italy). The necessary spark in this lock was produced by a rotating hammer drawn by the shooter by means of the trigger.

When the trigger was pulled, the hammer produced a spark by making the flint strike a piece of steel. At the same time, it opened a cover of a pan with gunpowder. Gunpowder was ignited by the sparks and propelled the projectile.

Thanks to its simplicity and cheap production, the flintlock was widely used by the military. It was further improved by the French in their muskets. Flintlock also brought about the development of handguns. Percussion pistols were among popular handguns.

One of the oldest firearms comes from Bohemia

The archaeologists have found 7 pieces of the oldest firearms used by the Hussites in the area of today’s Czech Republic. Those findings prove that Bohemian lands were among the first places in Europe to develop and use firearms. The Hussite guns were probably highly inaccurate, and their main purpose was to create chaos on the battlefield. The weapon was more dangerous for the person using it than for the enemies.

Different variations of flintlock were used up to the 19th century, when percussion pistols came into existence. This system consisted of a cap with the bottom filled with the primer mixture (such as gunpowder combined with Ammonium chlorate). The mixture was hit by the hammer drawn and released by the shooter by means of the trigger (the mechanism is similar to the flintlock system). 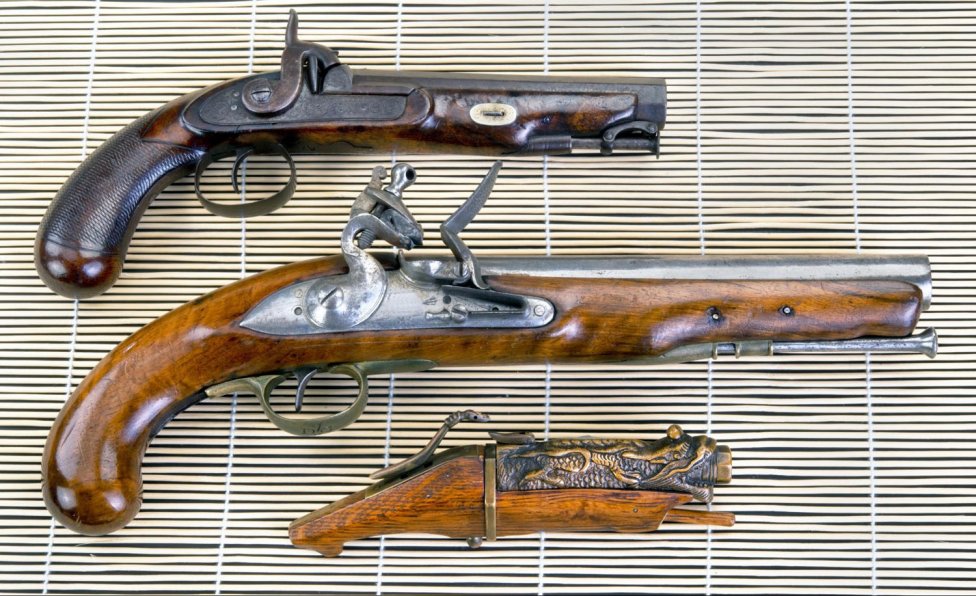 A patent for the percussion cap was registered in 1822 in the USA by Joshua Shaw. This was the first step in the development of weapons outside Europe. The mechanism was made more popular by Samuel Colt. His revolvers became the first widespread guns.

Paradoxically, the British and US armies were the last to adopt this mechanism in 1842. 20 years later, percussion and flintlock weapons were replaced by the mechanism of integrated ammunition with a metallic cartridge loaded via the breech. Different variations of this mechanism are still used in some weapons today.

In 1892, automatic guns appeared and completely changed the nature of warfare. The first mentioned technologies are now only used in historical replica weapons. But this is a topic for another day.