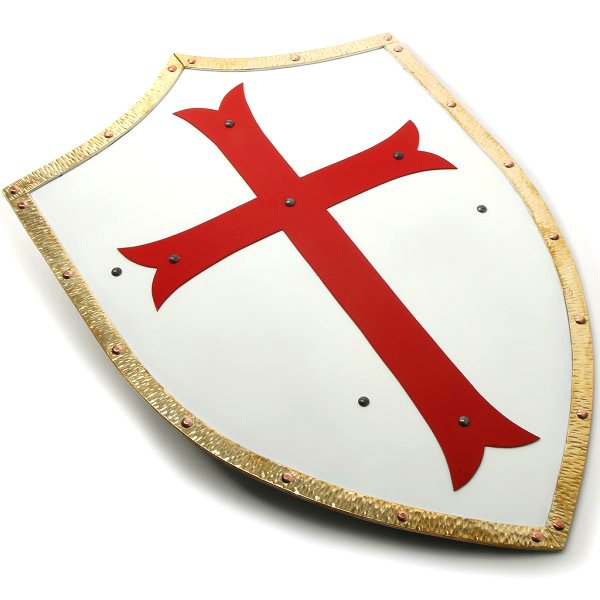 Before the firearms widely spread on the battlefields and revolutionized the world of warfare, the shields made from various materials such as wood or wicker (sometimes iron) had been serving well to their owners for long centuries. The combatants usually held them in left hands or had them strapped onto their left shoulders. Do you know that different shapes were used in different times so basically you can recognize the historical period by looking at the shape of the shield?

The main purpose of the medieval shields was obviously to protect its holder against enemy, but some of them could be used for attacking as well. Later the shields gained additional function as identifiers when they begun to carry personal coats of arms. Infantry bear different shields than cavalry although both were corresponding to the actual trends. As mentioned before, the most significant was the shield’s shape.

The round ones with a shield boss in the middle (also called umbo) were common in the earliest Middle Ages. Then oval shields appeared (about 10th century) followed by kite shields firstly favoured among Norman warriors and eventually spread into the whole Europe (and even further during the Crusades). The kite shields could still protect the soldier’s legs as ovals did while they newly profited from advantageously lower weight. Due to their shape they are also known as almond shields or leaf shaped shields or Norman shield because of its origin. They were wooden and covered by leather or cloth.

Through the next centuries the shape of the shields kept on changing. The upper edge of the “almond” slowly became straight and the lower sides were getting shorter until it reached typical triangle (or more precisely spherical triangle) shape of heater shield. At the same time more advanced body armour became available allowing the heater shield to be smaller. It reached only to combatant’s waist. In late 13th century the sides of the shields became broader than the upper edge. Later the base became round. This new shape is characteristic for Iberian shields peaking in late gothic period (15th century). These times the knights did not only fight in serious conflicts but also played in the tournaments. They used special kind of shield named ecranche featured with a cut out for jousting lance to go through.

In late Middle Ages a pavise was introduced to infantry units. Pavise was a shield large enough to fully hide a man behind it made of soft wood covered with multiple layers of leather or cloth. It could be utilized to raise a continuous row in a similar way as ancient Romans did. Thus created wall was called pavisade. 15th and 16th century armies benefited from pavises mainly during the sieges like in the Hussite wars or other conflicts. The whole body protection provided by these enormous shields was also appreciated by the crossbowmen (or later shooters), who would otherwise be vulnerable while they were loading their weapons.

Technological progress of 16th century removed the shields slowly away from the main European battlefields but they still kept important place in heraldry. The shield displaying a coat of arms is called escutcheon. Escutcheons were firstly carried by the knights on medieval tournaments in order to distinguish each other among fully armoured competitors. The coat of arms was also present on their surcoats and on their horse’s caparison too. Escutcheons (and coats of arms) were also later used by other people and institutions such as clerics and church orders, town citizens and towns themselves, craftsmen and their guilds etc. so they did not necessary have to be placed on the battle shield. They came in various styles: 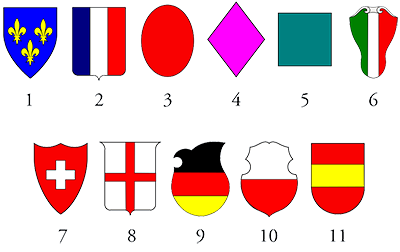 The discipline concerned in escutcheons and coat of arms is called heraldry. Using of heraldic symbols was constituted by specific rules such as rule of tincture defining the colours. The escutcheon should be composed from permitted colours (which were red called gules, blue azure, green vert and black sable), metals (gold displayed as yellow or silver displayed as white) or furs (black and white ermine or blue and white vair). In order to keep enough contrast there was a rule that colours could not touch other colours and metals other metals. Only colour-metal contact was possible. On the other hand, the furs could be combined with both. Later there were some other colours allowed like purple, sky blue etc. and some exceptions from the rules became tolerated.

Around the escutcheon we can see other non-compulsory elements. Sometimes the shield might be coated in princely coat or royal tent. Above the shield there can be placed a crown (or a coronet) or mantled helmet with a crest which might be on a torse. The shield can be held from both sides by the supporters (animal or human) standing on a compartment. On the top there might be written a battle cry and in the bottom a motto.