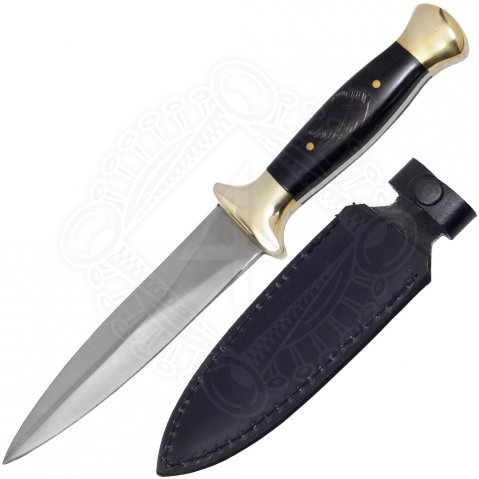 Powerful knife with with stainless steel blade. Brass guard and pommel. The boot dagger comes with the depicted scabbard.

If you put down your email here, we will notify you as soon as the product Boot dagger with black plastic coating is in stock again.

Please throw with the knife at soft materials, into which the knife can thrust well. Suitable is soft wood or foam target boards. An ideal choice is one of our targets. This boot dagger will serve you much longer and becomes not blunt. In addition, the risk of injury in cases when the knife or dagger accidentally bounces is much lower. Avoid throwing onto tree trunks, or other inappropriate targets. When the knife edge hits a hard knag or a steel nail in the wood, it gets blunt or even damaged. The knife blade can even get broken in extreme cases. Damage due to improper use cannot be reclaimed as a defect of the product!

Included in these categories: Boot daggers